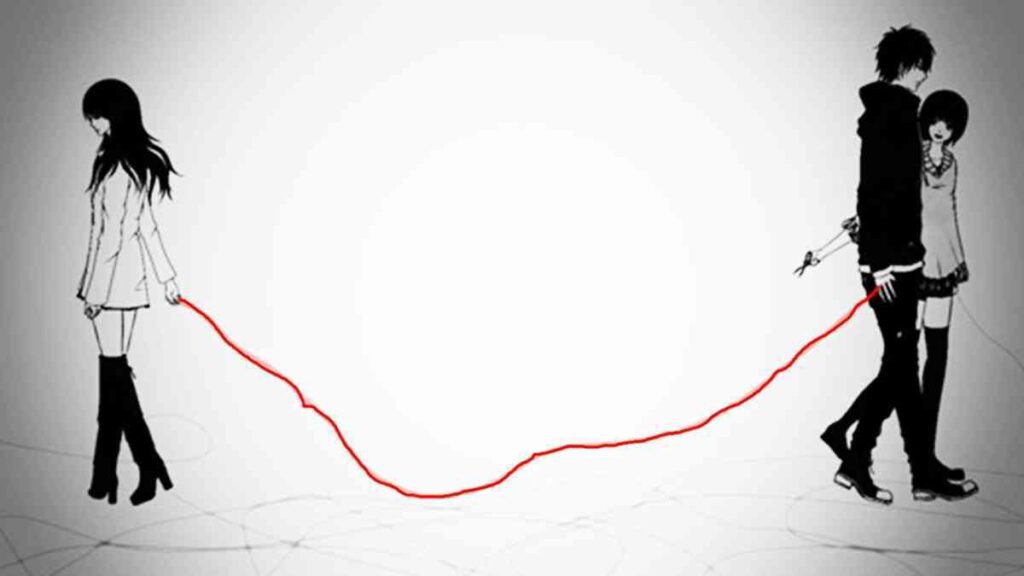 The idea that the lives of individuals are interconnected by some invisible matter originates in the land of the rising sun. The Japanese believe that if a person is destined to meet someone, then this will definitely happen. Indeed, in their opinion, a red thread is tied to the little finger of each of us, leading to the one with whom we are destined to connect with.

This thread is invisible and always remains between two people, regardless of time, place, or circumstances. The thread can get tangled or stretched, but it never breaks.

As they say in Japan, the origins of this beautiful legend are connected with anatomy, since the ulnar artery connects the heart to the little finger. Therefore, it is believed that the blood vessel is the red thread of fate, symbolizing a secret spiritual connection.

Oath on the little fingers

Belief in such things led to the emergence of rather strange traditions in Japanese culture. Even during the Edo period (1603 to 1867), some women cut off their little fingers to prove their love for their husbands.

It was considered the highest symbol of devotion, something similar to what the yakuza did and continue to do as a symbol of obedience to their “oyabun” (boss).

That is why in Japanese the “little finger oath” known to us can be translated as “severed finger”. Incidentally, the Japanese often make such promises, known as “Yubikiri genman.” To do this, they even have a corresponding children’s song with creepy lyrics:

So be careful when giving an oath to a Japanese, he can take it literally.

There are several legends about this in Japan. One of them says that the old man who lives on the moon goes out every night and searches among the souls for those who are destined to unite on earth, and when he finds them, he ties them with a red thread so that they do not get lost and find each other.

But another legend is more popular, which almost every Japanese child knows. It sounds like this:

“Long ago, the emperor learned that in one of the provinces of his kingdom there lived a very powerful witch who had the ability to see the red threads of fate. Therefore, he ordered that she be brought to him.

When the witch arrived, the emperor ordered her to find the other end of the thread that was tied to his little finger and show him the woman who was destined to become his wife.

The witch agreed. She took his thread in her hands and followed it. The search led them to one of the stalls in the market, where a poor peasant woman was trading with a baby in her arms.

“This is where your thread ends,” said the witch. Hearing these words, the emperor was furious, believing that women were mocking him. Out of anger, he pushed a peasant woman who was carrying a child in her arms, because of which she fell, and a wound appeared on the girl’s forehead. He then ordered his guards to execute the witch, which they did.

Several decades passed, but the emperor never married. Then one of the courtiers advised him to marry the daughter of a very powerful commander, and he agreed.

The day of the wedding came and the moment when he first saw his wife. She entered the temple in a beautiful dress, and her face was completely covered by a veil.

When she approached and revealed her beautiful face…the emperor was amazed, because there was a recognizable scar on his bride’s forehead…”

Hence it turns out that the red thread is an invisible connection that attracts us to certain people despite any obstacles and difficulties. So be careful with your little finger or you may never meet your destiny.

Advertisement. Scroll to continue reading.
In this article:destiny, Japan