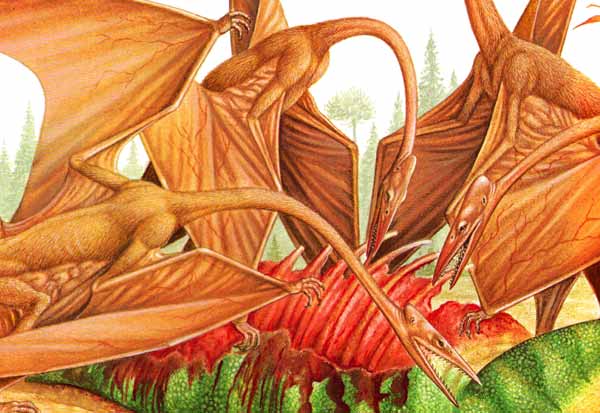 Azhdarchids were mostly large to gigantic, long-skulled Cretaceous pterosaurs, noted for their enormous wingspans (up to 10 m or so in the case of Quetzalcoatlus from the USA and Hatzegopteryx from Romania), elongate necks, and long, stork-like jaws. Tradition would have it that these animals were vulture-like scavengers or water-trawling piscivores, but consideration of everything we know about their wing form, body shape, overall ecomorphology, trace fossil record, palaeoenvironment and so on shows that they were strongly terrestrial animals that most likely foraged quadrupedally in continental environments, reaching down to grab animal and plant prey in a manner analogous to that practised today by marabou storks and ground hornbills (Witton & Naish 2008). Mark Witton and I dub this the ‘terrestrial stalking hypothesis’ and we have more to say on it in a paper currently in review at a major open-access journal. 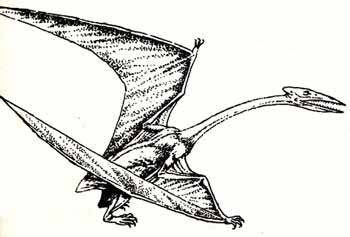 Demonic Quetzalcoatlus illustrated by Guy Michel in 1979. Read on for details and origins.

Palaeoart memes are those traditions we so frequently see in the history of palaeontological art whereby artists copy the behavioural hypotheses, body shapes, postures and even colour schemes of given animals again and again and again, not because they’re well supported or based on evidence of any sort, but simply because that’s what’s been depicted beforehand. Examples can be seen everywhere, with my favourites including Freaky Giraffoid Barosaurus, black-and-white Phorusrhacos, Scolosaurus the mega-louse, Big Buzzard Teratorn, and…. Demonic Quetzalcoatlus.

By now, it’s reasonably well known to interested people what azhdarchid pterosaurs looked like when alive. The answer: sort of like a cross between a giraffe and a stork, though with all of this being over-ridden by uniquely pterosaurian weirdness; membranous wings supported by giant fingers, a large cranial crest, plantigrade feet, and so on. 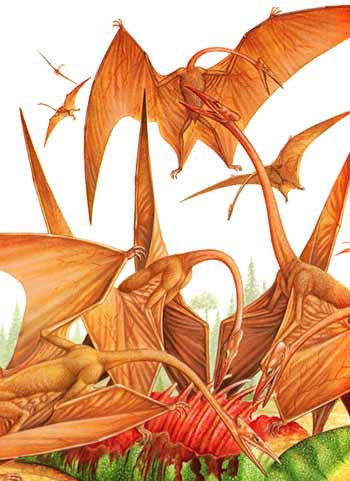 David Orr’s brilliant depiction of a Demonic Quetzalcoatlus group squabbling over a dinosaur carcass. In the full image, a Tyrannosaurus is approaching from the far distance.

I first got to know Quetzalcoatlus as a very, very different beast, however. Little known today is that Quetzalcoatlus was depicted as a most peculiar creature in a few books from the 1970s and 80s. As you can see from the images reproduced here (the black-and-white image above is by Guy Michel and appeared in John Gilbert’s 1979 book Dinosaurs Discovered), it was depicted as a short-headed pterosaur with a bony lump on the back of its head, a very flexible neck, and pointed, toothy jaws. Imagined like this, it really looks like some sort of horrific demon. Richard Orr’s painting – shown at the top of this article and adjacent – always makes me think of one of Hieronymus Bosch’s scenes of Hell. Truly, it’s a horrific, terrifying scene (and I don’t mean that as a slight to Orr’s good artwork). Where on earth did this view of Quetzalcoatlus – I call it the Demonic Quetzalcoatlus – come from? 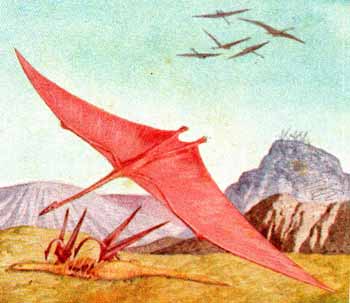 Giovanni Caselli’s 1975 Demon Quetz, the image that started the meme.

Orr’s painting comes from a book written by the unique Dougal Dixon* (Prehistoric Reptiles), and originally published in 1984 (I only have a 1993 edition). It’s obvious from many of the scenes included in the book that Orr had been heavily inspired by Giovanni Caselli’s reconstructions from L. B. Halstead’s The Evolution and Ecology of the Dinosaurs, first published in 1975. Sure enough, if we look at Halstead’s book, we see another version of the same creature. Caselli didn’t show the animals in as much detail as Orr or Michel did, but we again see a comparatively short skull and a blunt, knob-like crest at the back of the head. The animals are also shown as being red, just like Orr’s creature. As mentioned above, this is a classic feature of the palaeoart meme: the creatures are given the same livery, just because. Anyway, Caselli’s version came first – but where did it come from?

* More on him soon! I just gave a talk partially devoted to Dixoniana at the 2013 Weird Weekend conference. 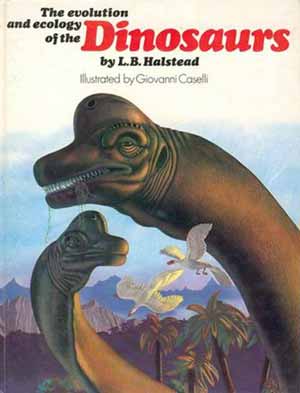 The late L. B. Halstead’s The Evolution & Ecology of the Dinosaurs, one of the most influential of dinosaur books when it comes to palaeoart memes. There are two editions, famously differing in how they treat the ‘flippers’ of Compsognathus.

I asked Giovanni Caselli himself back in 2010. When the illustrations for The Evolution and Ecology of the Dinosaurs were being produced, Quetzalcoatlus had only just been announced, and hadn’t even been named (evidently, we’re talking about some time between 1972 and 1975). There was thus no idea what it might look like: all that was known was that it was a giant pterosaur that lived inland. Giovanni’s painting was, he told me, a complete exercise in speculation…

“I took some time to find out about this issue. Naturally, since Halstead has been long dead, I had to dig through my archive but only to find that, being the discovery very recent and not yet documented at the time, Halstead told me just to do a small illustration of a huge pterosaur, and I did just that. Any similarity or difference as compared with present-day renditions is purely accidental (as they say in other fields of entertainment).”

How ironic, then, that his conjectural creation became a palaeoart meme that persisted until the 1990s at least (the Richard Orr version was appearing in 1993 editions of Dougal Dixon’s Prehistoric Reptiles). 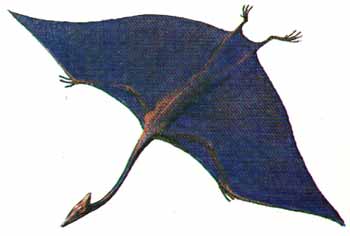 Paul Glynn reminded me that there’s another version out there: Bob Hersey’s purple Quetzalcoatlus from David Norman’s 1980 Spotter’s Guide to Dinosaurs & Other Prehistoric Animals (Norman 1980). I show it here. Hersey’s purple version is very obviously based on Caselli’s painting, and I’m 99% certain that the other Demonic Quetzalcoatlus images out there are based on his painting too. Another appears in Usborne’s 1977 Children’s Encyclopedia of Prehistoric Life, written by Anne McCord but with Halstead providing expert advice (McCord 1977). This time round, the artist was at least original enough to make the animal brown, not reddish.

It gets better: I give you an actual skeleton of a real Demonic Quetzalcoatlus! Well, a published drawing of one, anyway. Just like the animals depicted in those various sources discussed above, this skeleton shows all the characteristic features of its meme: it has a long neck (made up of many small vertebrae, and hence presumably quite flexible*), a relatively short skull, a lump-like, posteriorly projecting crest at the back of its head and small, pointed teeth. Wow. I bet you had no idea that such a skeleton had ever been found.

It hadn’t, of course. The artist (Chris Forsey) must have been asked to “do a Quetzalcoatlus skeleton”, and must have invented what you see here. I presume that Forsey looked at the Demonic Quetzalcoatlus renditions produced by Gilbert, Orr and those other artists, the hypothetical skeleton you see here being the result. I don’t know this, of course: as you’ll no doubt have noticed, this palaeoart meme stuff involves an awful lot of guesswork, some or all of which might be erroneous. But the similarity between this alleged Quetzalcoatlus and the horrendous reddish demons we looked at above is striking, and unlikely to be coincidental. Forsey’s version was first published in 1986 – the book is called The Day of the Dinosaurs (Stidworthy 1986) – and republished in 1999.

* A marked contrast to the real azhdarchid neck, with its lower number of long, cylindrical vertebrae and reduced flexibility (Witton & Naish 2008).

Even the most complete of the real Quetzalcoatlus specimens is nowhere near complete as the skeleton shown in Forsey’s sketch. But I wondered if the look and pose of Forsey’s Demonic Quetzalcoatlus skeleton was based on a real specimen, perhaps of one of the substantially smaller, Solnhofen pterosaurs. Tipped off by Pete Buchholz (him again), I realised that it’s copied directly from a Pterodactylus skeleton that features on p. 10 of Peter Wellnhofer’s Illustrated Encyclopedia of Pterosaurs (Wellnhofer 1991). And the funny thing is – that skeleton is the very first skeleton illustrated in the book. The broken wing finger makes this 100% certain. 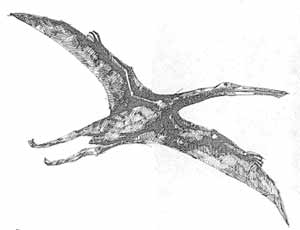 More accurate renditions of Quetzalcoatlus – this time with a long, toothless rostrum – were appearing in the literature by the end of the 1970s. This sketch appeared in a 1977 article by Wann Langston.

By 1977, Wann Langston was illustrating Quetzalcoatlus as the long-snouted pterosaur that it really was, and copious artwork depicting Quetzalcoatlus more accurately appeared throughout the 80s, 90s and into modern times (for especially up-to-date azhdarchids, I point of course to Mark Witton’s excellent 2013 volume Pterosaurs). One of the great frustrations of azhdarchid research is that good anatomical information on Quetzalcoatlus has never been published: there’s a paper on the cranial remains of Quetzalcoatlus sp., one of the smaller of the three azhdarchids (Vremir et al. 2013) known from the Texan Javelina Formation (Kellner & Langston 1996), but good data on Q. northropi, the giant Javelina azhdarchid, is very thin on the ground; this despite the fact that the animal was first reported during the 1970s (Lawson 1975). Wann Langston – the palaeontologist who was supposed to be describing Q. northropi – died earlier this year, and right now it’s unsure what, if anything, is going to happen. Science does march on, but sometimes the march is more of a slow crawl…