Etched onto the arid “moonscape” of Peru’s southern desert lies one of man’s greatest mysteries; the Nasca Lines. These ancient lines are the most outstanding group of geoglyphs in the world. These geoglyphs consist of over 300 hundred figures made of straight lines, geometric shapes and pictures of animals and birds – and their patterns are only clearly visible from the air.

Hundreds are simple lines or geometric shapes; more than seventy are zoomorphic designs of animals such as birds, fish, llamas, jaguar, monkey, or human figures. Other designs include phytomorphic shapes such as trees and flowers.

Here is the size of some of the most famous Nasca geoglyphs:

New look at the Nazca Glyphs

Official explanation of how the lines were made:

The shallow etchings were made well over 2,000 years ago by Indians who cleared the stony surface, exposing the whitish soil underneath. The pebbles which cover the surface of the desert contain ferrous oxide. The exposure of centuries has given them a dark patina. When the gravel is removed, they contrast with the color underneath. In this way the lines were drawn as furrows of a lighter color, even though in some cases they became prints. In other cases, the stones defining the lines and drawings form small lateral humps of different sizes. Some drawings, especially the early ones, were made by removing the stones and gravel from their contours and in this way the figures stood out in high relief.

Scientists continue to debate their purpose, offering such theories as a calendar, a map of underground water supplies, ancient “message in the bottle” for the future generations – even landing strips for space aliens.

New Theory about how the Nazca glyphs were made

In this short post we want to bring your attention to the puzzling feature common to nearly (we have not analyzed all of them) all glyphs:

All drawings were made with a single, uninterrupted line.

Perhaps these lines were not made from the ground but from the air with use of some unknown device/weapon (e.g. an acoustic beam)? Once turned on the beam had to complete an entire glyph/drawing with a single, uninterrupted line (which also does not cross itself). Perhaps Crop Circles are also made from the air with similar technology? 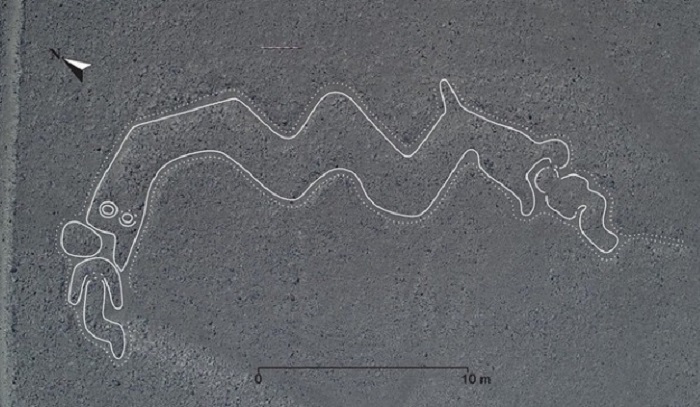 One of the great mysteries of our history is the Nazca lines, located 400 km south of the Peruvian capital, Lima. It is believed that the...