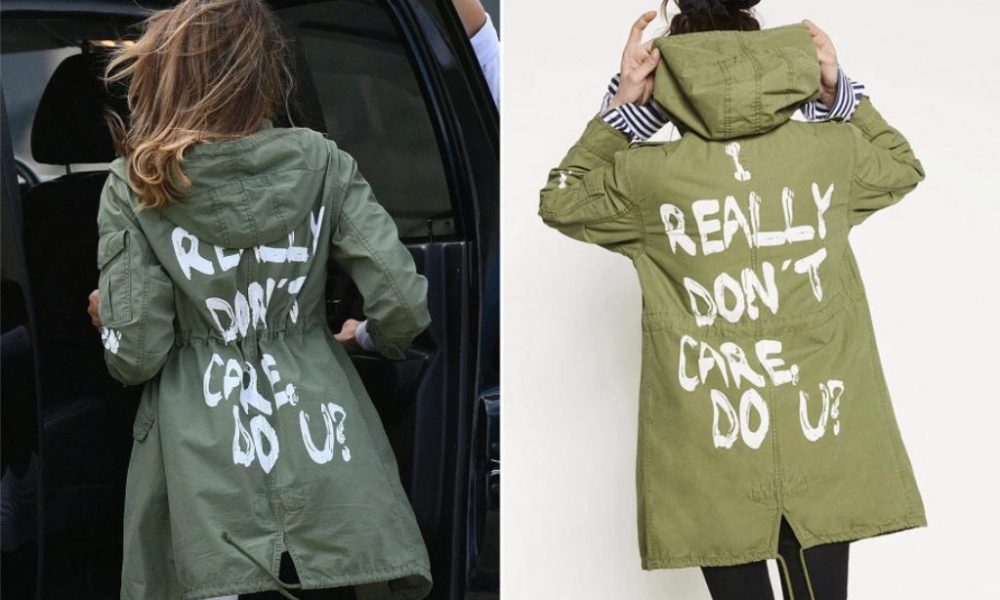 If you were perplexed when you heard that First Lady Melania Trump made a surprise visit to a child detention center in McAllen, Texas wearing a jacket with the message “I REALLY DON’T CARE, DO U?”, welcome to the club. It is a maneuver that nobody–whether in mainstream or alternative news–has been able to make coherent sense of.

But we all have our theories.

It is important to note that Melania took the jacket off prior to going into the facility, but wore the jacket on the way there where the press took photos.

The jacket worn by Melania on her June 21st trip was a $39 cape from the 2016 Spring-Summer collection of Zara, a fast-fashion brand started by one-time ‘richest-in-the-world’ billionaire Amancio Ortega.

Melania’s stylist Hervé Pierre told Women’s Wear Daily he had never seen the jacket before, but declined to comment any further.

That day, FLOTUS communications director Stephanie Grisham implies that there is no ‘hidden message’:

Today’s visit w the children in Texas impacted @flotus greatly. If media would spend their time & energy on her actions & efforts to help kids – rather than speculate & focus on her wardrobe – we could get so much accomplished on behalf of children. #SheCares #ItsJustAJacket

Later that same day, Donald Trump contradicts Grisham and implies there was a message to his wife’s madness:

“I REALLY DON’T CARE, DO U?” written on the back of Melania’s jacket, refers to the Fake News Media. Melania has learned how dishonest they are, and she truly no longer cares!

What is self-evident from the facts is that this was not ‘just a jacket’ that Melania chose to wear on this particular day, and her communications director knows it. Anyone aware of Melania’s meticulous and purposeful style habits would know that this obviously awkward and uncharacteristic choice of garment, complete with offensive message, was done for a special reason.

She didn’t even own this jacket, as per her stylist. She was obviously asked to do this, and not by Donald himself–more likely by advisors that are managing much of what Donald Trump says and does. For her to be willing to subject herself to the obvious derision and mockery of the mainstream media, it must have been somewhat important.

And this was not lost on the mainstream media. It was SO obviously a fashion faux-pas that they must have been thinking, as they were lashing out their tirades about her not caring about the children she was visiting, that somewhere, Trump’s people were having a big and knowing laugh at mainstream media coverage. It became safer for the mainstream to report on what celebrities and others were saying and doing about it, both in outright criticism as well as efforts to turn this into publicity opps for those who ‘really care’ about the children. This tweet from Julia Louis-Dreyfus kind of encapsulates what was being reported on:

It’s endless with these morons.https://t.co/Zuph1E6qw7

Now does this jacket signify an attack on Fake News Media, as Donald Trump tweeted? Perhaps, but certainly not on the part of Melania. It does put the mainstream media in a difficult position: opening them up to criticism for focusing on Melania’s fashion rather than her efforts to help these children, but making it impossible for them to ignore. But this is only the first cut. What really seems to be going on is an attempt to gain control of the narrative, not only about immigration policy but about one of the most important things happening on the planet: child (and human) trafficking, something that Trump has hinted that the mainstream media has been complicit in.

Like no other president before him, the Trump Administration is bringing human trafficking to light and combating the slave trade, sex trafficking, and pedophilia. Under Jeff Sessions there have been thousands of arrests on sex traffickers and pedophile rings; the information barely gets a mention in mainstream media.

Trump’s ‘Zero Tolerance’ Immigration policy was designed to prosecute adults who were bringing children with them across the border either for cover or to eventually sell. There was a Senate Report in 2016 entitled ‘Protecting Unaccompanied Alien Children from Trafficking and Other Abuses’ that describes, among other things, how immigrant children were used for forced labor at an egg farm in Marion, Ohio.

Trump appears to be getting the upper hand in the debate by blaming the Democrats for being unwilling to agree to legislation on immigration that would close loopholes that are exploited by those adults crossing the border Trump refers to as ‘coyotes.’ In a recent speech Trump noted that ‘Trafficking is worse today than at any time in history,’ and it seems that politicians who will not be willing to acknowledge what a huge problem human trafficking is will begin to be seen as facilitating it.

It is noteworthy that within the Texas facility Melania visited while wearing her jacket, 49 of the 55 children staying there had arrived in the country unaccompanied. While the outcry promulgated by Democrats was about children being separated from their parents, what the public is hopefully starting to get alerted to is that there is a far more significant and widespread crisis about child exploitation and trafficking that the Democrats don’t seem to be in a hurry to acknowledge or to solve.

While it indeed seems that the Democrats are getting in the way of efforts to combat human trafficking, my theory looks beyond left/right politics. Political administrations from both sides have for a long time either turned a blind eye or were complicit in allowing child and human trafficking activities to flow unabated. The reason for that? Because these activities are actually run by the small, powerful elite who control the government.

Message To The Elite

I believe the real story here, and the underlying reason that Melania’s jacket ploy was used, is to send a cryptic message out to this very elite group, saying that all ‘pretense’ to caring about children will be laid bare, and the nefarious abuse of children perpetrated by this group will soon be brought to light. There seems to be a confidence with which Melania, Donald, and the White House are carrying themselves, as if to say that this hidden group that has so long controlled political activity in the country has lost enough power that they will soon be revealed.

An interesting note is that Zara founder Amancio Ortega stepped down right after Trump signed the executive order to freeze assets of those involved in crimes against humanity. It is not a big stretch to think that someone who has risen to become the world’s richest man selling cheap clothing is part of the elite group.

Regardless, the whole jacket incident is the most blatant attempt I think the American presidency has ever made to convey to people that things in our world are not as they seem. We are at the precipice of receiving revelations that will surely anger and disturb us, but we need to have the courage to ready ourselves for it. I believe that an end to the systemic coverups about child trafficking by the elite/mainstream media axis may soon be upon us.