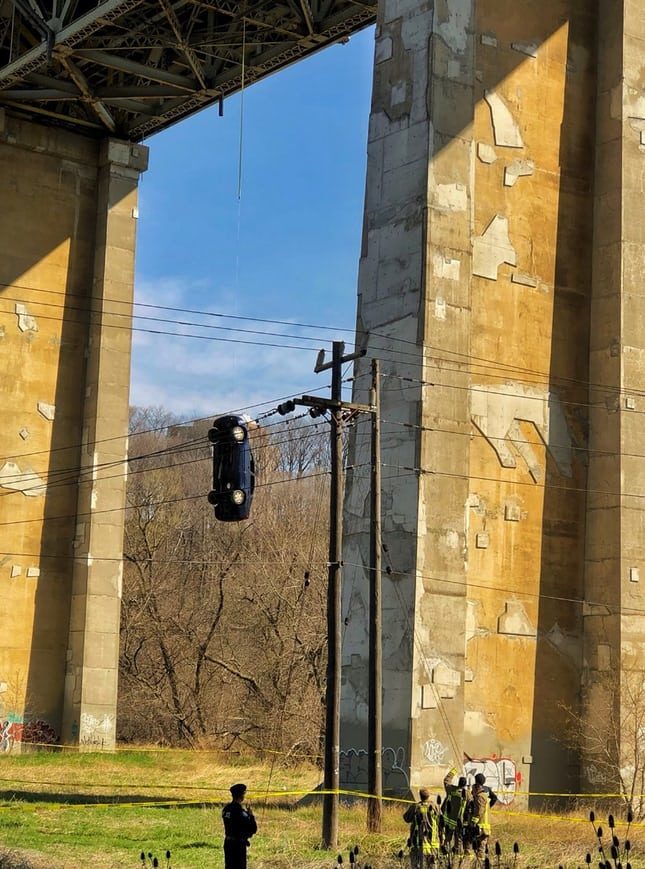 Was it the aftermath of a horrific accident? An art project? A prank?

Police and passersby were left perplexed and concerned after a burned-out car was found dangling precariously from a Toronto bridge as traffic rumbled overhead.

Soon after the blue sedan was spotted during rush-hour traffic on Wednesday, police, firefighters and paramedics showed up to assess the mysterious car. Strung up by a cable, it floated over a grassy area and posed no danger to public safety, officials said.

City police at first said it was a prop for a movie shoot. But after speaking with city officials, they retracted this explanation.

No movie shoot had been authorised, they said, and police were now investigating how exactly the car ended up suspended in mid-air.

The hollowed-out Honda Civic appeared to be scrubbed of all identifying markers; it bore no licence plate, several windows were missing and its underbelly had been stripped.

“I just saw some of the pictures myself and I was mystified as to how the car ended up there,” Toronto’s mayor, John Tory, told reporters on Wednesday. “You’re always very puzzled as to how a car would have got into that particular situation.”

Social media stirred with speculation. “What’s weirder: the fact that there’s a car dangling from a wire below a bridge, or that nobody has the slightest idea why or how the car got there in the first place?” wrote one person on Twitter.

Another pointed to the confusion over whether the car was linked to a movie shoot, asking: “Are the cameras, cast and crew hiding? Did they finish filming and simply forget the dangling car?”

A myriad of theories soon sprung up online to explain the car, linking it to everything from aliens to a student end-of-year prank – a nod to a 2001 prank that saw engineering students at the University of British Columbia suspend a red Volkswagen beetle – outfitted with a Canadian flag – from San Francisco’s Golden Gate Bridge.

Hours after the car in Toronto was spotted, the city’s fire department managed to safely lower it to the ground. Police said they were continuing to investigate.