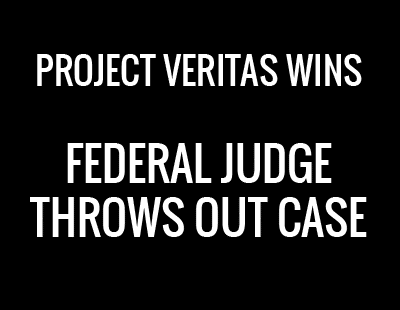 A federal judge has issued a Directed Verdict in “Teter v. Project Veritas,” ruling that the plaintiff did not have the requisite evidence to support a defamation claim. Plaintiffs must prove deliberate malice on behalf of the defendant in order to prove defamation. The Directed Verdict came on the third day of the trial. Project Veritas founder James O’Keefe, who was in Asheville, North Carolina for the trial, released the following statement.

“Let this be a lesson to all those who abuse our legal system to settle petty political disputes. The courts have once again vindicated our undercover methods and journalism. Project Veritas is 6-0 in lawsuits for a reason – the law is on our side.”

United States District Judge Martin Reidinger excused the jury late in the day on May 21 and invited arguments on why O’Keefe and Project Veritas should not be granted a Directed Verdict. The attorneys for Teter struggled to convince the judge, who would not allow the First Amendment to be trampled upon.

On Wednesday, the judge articulated passionate reasoning in his ruling to protect the First Amendment rights of journalists:

The judge also tactfully dismantled each plank of the plaintiff’s argument and called it the “thinnest of thin reeds.”

“Any one of these points [of the plaintiff’s argument], if they are evidence at all of actual malice, would constitute, really, the thinnest of thin reeds.”

You can read the full transcript of this morning’s proceedings below.