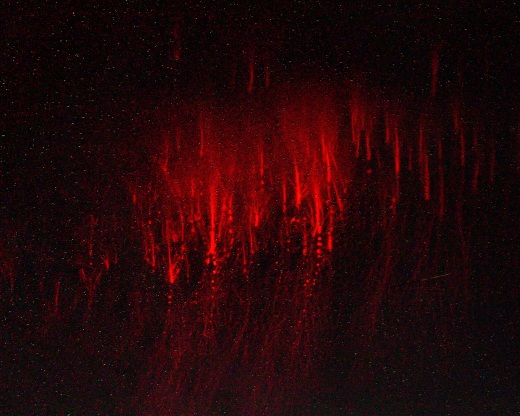 Have you ever seen sprites? They say that this is impossible. Strange and fleeting forms of Red Lightning materialize over thunderclouds, usually disappearing in less time than it takes to blink. However, storm hunter Michael Havan had no problems seeing them on May 23rd.

“The extremely bright jellyfish sprites were easily visible to the naked eye at dusk!” Says Gavin. “This is one of the brightest shots I’ve captured with my modified Canon T3i.”

Gavin saw this sight from Northwest Kansas. “Clear skies provided fantastic views of the MCS (mesoscale convective system) moving through Nebraska almost 100 miles from us,” he says. “I was not the only one who saw them.” There have been reports that people also saw sprites from Interstate 70. “

The storm lasted so long that Gavin managed to attach an 85mm lens to his camera for several close-up shots. “Because I had an image of the same area without a sprite from a few seconds earlier, I was able to subtract the sky (stars, air glow, etc.) to take a photo of the structure of the sprite without any distractions.

A solar minimum can stimulate sprites. During the low phase of the solar cycle — now occurring — cosmic rays from deep space penetrate the inner solar system relatively unhindered due to the weakening of the Sun’s magnetic field.

Some models claim that cosmic rays help sprites get started by creating conductive paths in the atmosphere.

Today, May 25, 2020, the level of cosmic rays crashing onto the Earth, reached its maximum levels, increasing today by 10.4% of average values.

The magnetic field of the sun is weak, which allows additional cosmic rays to penetrate the solar system. Neutron counts from the Sodankylä Geophysical Observatory of the University of Oulu show that cosmic rays reaching Earth in 2020 are close to the peak of the space age.

Advertisement. Scroll to continue reading.
In this article:Kansas,Red Lightning