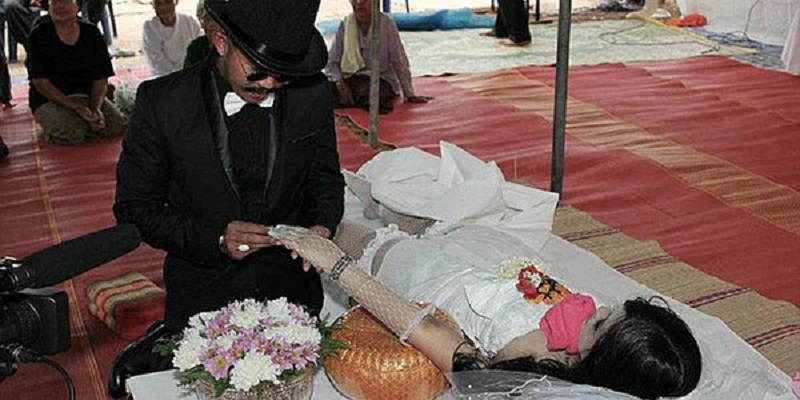 Dozens of people are condemned every year for robbing graves and stealing corpses in China. What drives these vandals in the 21st century? It turns out that, as in Europe of the 17th-19th centuries, there is a thirst for profit.

You can make a good “business” on the “fresh” corpses in China, thanks to the ancient custom of “yin hun” – the marriage of the dead.

Weddings of the Dead in China

This Chinese tradition has been around for about two millennia. It owes its appearance to the religious beliefs of the inhabitants of the Middle Kingdom: the cult of ancestors and Taoism. According to Chinese religious philosophy, the souls of the dead go to the world of shadows, where they are helped by the spirits of their ancestors. But only on condition that the harmony of the Tao is observed – the unity of the male and female principles.

Troubles in the afterlife lie in wait for those men who died before marriage. Moreover, they can harm living relatives by sending them misfortunes and illnesses. In no less danger are the souls of those whose widows enter into marital relations again. The invisible connection of the unity of Yin and Yang is collapsing, and therefore the first task of relatives is to restore harmonic balance.

The corpses of unmarried girls become “brides” of failed suitors. The best option is the recently deceased and preferably beautiful in life. The families of the deceased can get a lot of money for such a corpse – a ransom similar to what the groom’s family would pay for the bride during her lifetime. At worst, a century-old skeleton will do. The main thing is to follow the ritual and rebury the female remains next to the grave of a bachelor.

However, not only corpses become the wives of the dead. If the boy and girl were lovers, but the groom died before the wedding, the bride may be asked to become the wife of the spirit. The betrothal is carried out according to all the rules, only instead of the groom, a white rooster is present at the ceremony, personifying the soul of the deceased. After the “wedding”, the newly-minted wife moves to live with the family of the deceased groom and takes a vow of celibacy.

Of course, such a prospect for a young girl can hardly be called rosy. But among the Chinese living in rural areas, the custom of posthumous marriages is still quite popular. Moreover, the family of a girl who “marries” a spirit receives a good ransom. A significant role in the popularity of the tradition is also played by the fact that officially posthumous marriages were banned only relatively recently – in the era of Mao Zedong.

Advertisement. Scroll to continue reading.
In this article:China, yin hun