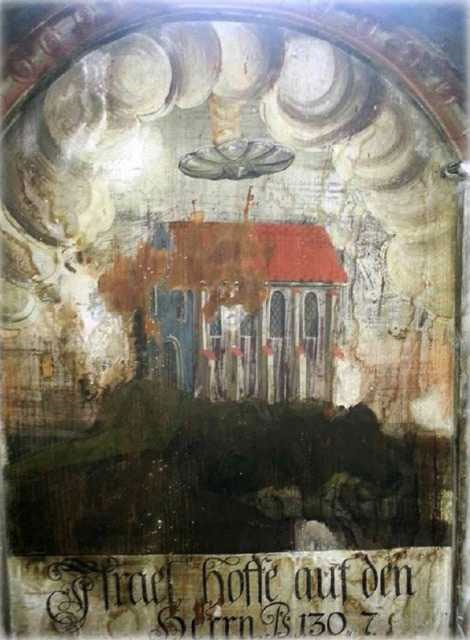 A UFO research organization in Israel has sent out a report regarding a wall painting in a 14th century church in Romania that may depict a UFO. It is similar to objects seen in paintings and coins ranging from the 4th century to the 17th century. One UFO investigator feels that the objects in the images may have an explanation that is more down to earth.

Gilli Schechter and Hannan Sabat of the Israeli Extraterrestrials and UFOs Research Organization (EURA), say they received a picture of the painting from Catalina Borta. Borta took the picture while visiting the Biserica Manastirii, or Church of the Dominican Monastery, in the town of Sighisoara. Sighisoara is believed to the birthplace of Vlad the Impaler, the inspiration for the legend of Dracula.

The wall painting depicts a disc-shaped object over a building that is emitting smoke. It also has a caption in German that reads “Israel, hoffe auf den HERRN,” which translated means “Israel, put your hope in the Lord.” EURA explains that this is a quote from Psalms song of ascents, c.130 v.7.

The painting appears to be very old, but it is hard to tell how old. According the Monastery’s website, it was originally built in the 14th century, but was destroyed and rebuilt in the 17th century. The EURA report also notes that they are unsure who painted it and when. However, they point out that the caption in the painting probably dates it to after 1523, when the bible was translated into German.