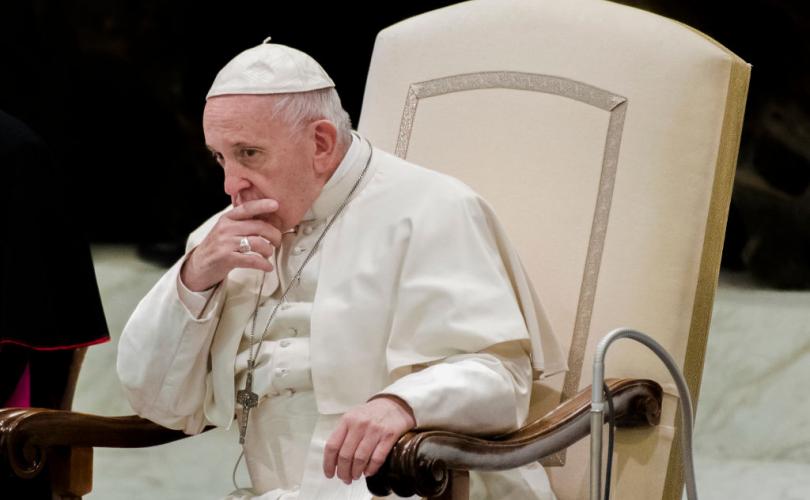 Pope Francis has acknowledged that the Roman Catholic Church has a persistent problem in which nuns are sexually abused by priests and bishops who have resorted to using them as “sex slaves.”

The admission by the pontiff marks the first public acknowledgement of the problem, which piles further scandal onto Catholic clergy who are already coping with a crisis of global proportions over the sexual abuse of children.

In recent years, Catholic nuns have raised their voices over sexual assaults by clerics in Africa, Latin America, India, and Italy.

Speaking to an Associated Press reporter on Tuesday during a flight home from Abu Dhabi, the pope acknowledged that more must be done to address the crisis:

“It’s true … There have been priests and even bishops who have done this. I think it is still going on because something does not stop just because you have become aware of it.”

The pope also revealed that an order of nuns was dissolved by the previous pontiff, Pope Benedict, after abuses “to the point of sexual slavery” were committed by high-ranking clergy. Pope Francis said:

“It’s a path that we’ve been on. Pope Benedict had the courage to dissolve a female congregation which was at a certain level, because this slavery of women had entered it — slavery, even to the point of sexual slavery — on the part of clerics or the founder.”

A Vatican press representative later confirmed to CBS News that the order of nuns dissolved in 2005 was the Community of St. Jean in France.

The comments come on the heels of an article released by a Vatican women’s magazine that delved into the abuse of nuns within the Catholic Church.

In an article for Women Church World, editor-in-chief Lucetta Scaraffia noted cases where nuns were forced to carry out abortions of priests’ children or to bear children that the priests refused to recognize, noting that offenders enjoyed impunity because of the culture of silence surrounding their crimes.

“If eyes continue to be closed to this scandal – rendered even more serious by the fact that the abuse of women entails procreation and is thus at the root of the scandal of imposed abortions and of the children not recognized by priests – the condition of oppression of women in the Church will never change.”

The magazine also included a message from the pope addressing the scandal, where he tore into the abuse of power by high-ranking clergy and priests who have shielded their crimes.

On Wednesday, church officials sought to walk back the “sexual slavery” line. Vatican spokesman Alessandro Gisotti told reporters that the ope “spoke of ‘sexual slavery’ to mean ‘manipulation’ or a type of abuse of power that is reflected in a sexual abuse.”

Last year, the International Union of Superiors General, a body representing over half a million nuns, blasted the “culture of silence and secrecy” over such abuses in the church, and urged members to report instances of abuse to their congregations as well as church and state authorities, noting that they “stand by those courageous women and men who have reported abuse.”

This article originally appeared on TMU

In this article:sex slaves, sexual assaults by clerics