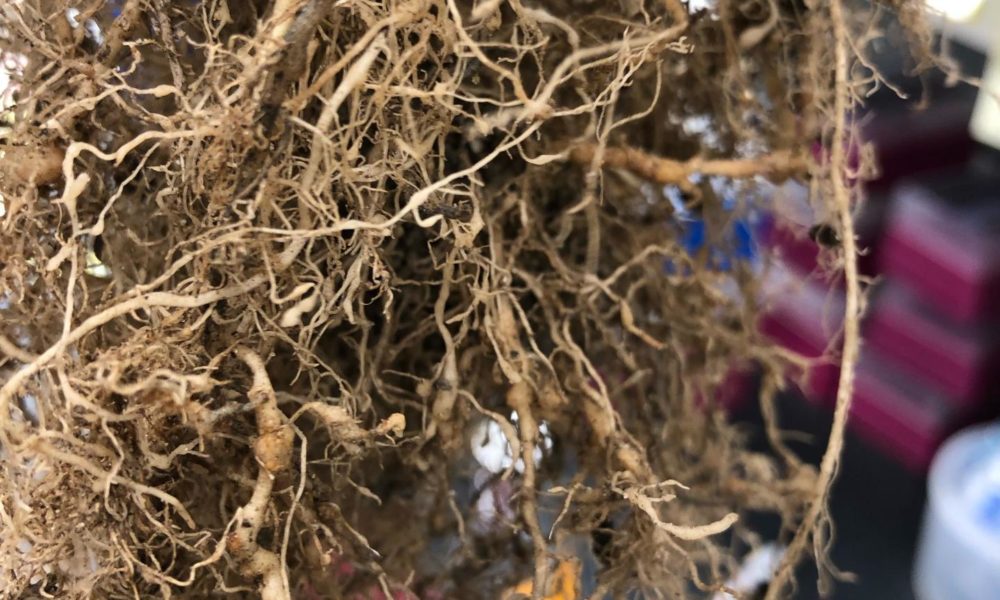 It turned out that plants use a chemical “tongue” to drive nematodes away from themselves by tricking these worms, who planned to trick the plants themselves.

Tiny nematode roundworms are recognized pests. Based on the roots of various cultures, they get a hotel with full board there, and are responsible for billions in losses at farms around the world. However, scientists have discovered a superpower in plants, which may be the key to new methods of dealing with these parasites. The authors published an article about their research in Nature Communications .

What to do if you are attacked, and you are chained to a place and cannot escape or destroy the enemy? Convince him to get out of the next-best. Scientists from the Boyce Thompson Institute have found that plants do not just perceive and mimic the “smell” of nematodes. According to lead author Frank Schroeder, they recognize the nematode communication system and are introduced into it by studying the signaling system, the same way we learn a foreign language. After this, the plant develops a kind of propaganda activity, convincing the nematodes that “there is a bad place here.”

Worms produce and secrete a group of chemicals called ascarosides to communicate with each other. For their defensive purposes, plants metabolize ascarosides and release metabolites back into the soil.

Earlier work showed that ascar # 18 ascaroside, secreted by nematodes, causes plants to enhance protection. Moreover, the substance eventually disappeared from the soil. Scientists compared these data with the fact that plants can modify the metabolites of pests, and suggested: it is possible that plants and nematodes interact through the transmission of signals by small molecules and change each other’s messages.

To check, the team processed ascr # 18 with three types of plants – carapace, wheat and tomato. Then, scientists compared the compounds of these plants and plants of the same species from the controled, untreated group. They identified three ascr # 18 metabolites, the most common of which was ascr # 9. These three metabolites, the processed tomatoes and the carapace, were isolated back into the soil. Moreover, the “blend”, consisting of 90% ascr # 9 and 10% ascr # 18, getting into the soil, is associated with the massive departure of nematodes from the roots of the plant and a decrease in the scale of parasite invasion.

The team hypothesized that nematodes in the soil perceive this mixture as a signal sent by plants already infected with nematodes: once the plant is already inhabited, it is worth looking for another place so as not to overpopulate the former. Worms could evolve to use plant metabolism and make them send this signal to help their enemies. Plants, in turn, could evolve to fake the signal, to appear as badly infected as possible, thereby tricking potential invaders.

Scientists note that plants can have similar types of chemical bonds with other pests. This opens up prospects for creating an environmentally friendly method of combating various agricultural parasites. Future studies may find the most suitable option for the substances used. The authors note that there should be no harm to crops, their productivity or nutritional properties, since ascarosides, for example ascr # 18, mainly stimulate the plant to respond faster and stronger to the pathogen, rather than provoke a broad-profile protective response that could, say, inhibit their growth.

Researchers emphasized that plants metabolize ascr # 18 via the peroxisomal β-oxidation pathway, a system that persists in many plant species.

“This article reveals an ancient interaction,” Schroeder explains. “All nematodes produce ascarosides, and plants have had millions of years to learn how to manipulate these molecules.” Plants are not passive green objects. They are active participants in an interactive dialogue with the environment, and we will continue to decipher this dialogue.”

In this article:nematodes, plant intelligence