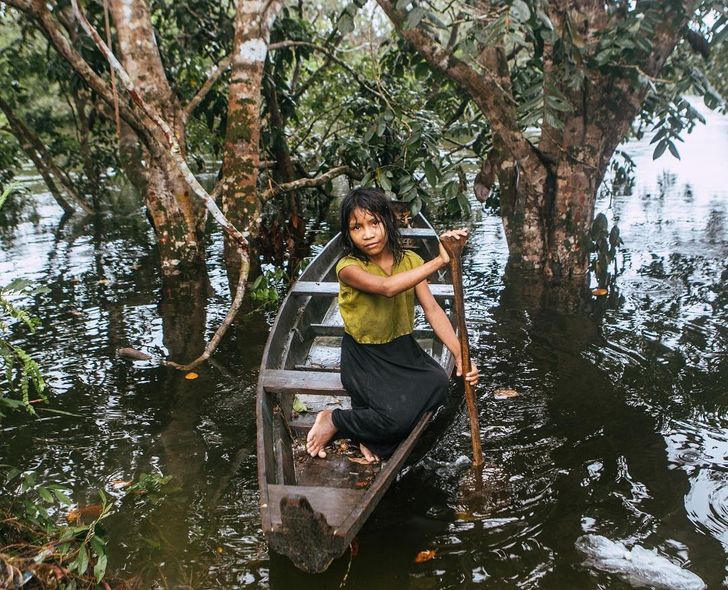 In the wilds of the Brazilian jungle, the people of Piraha live, which is difficult to understand for a modern person. They do not know the past and the future, consider prolonged sleep dangerous and have no idea what stress is. The missionary who came to the piraha to teach them life, came to the conclusion that these people are the happiest on Earth. And years later, he completely realized that he needed to learn from them, and not vice versa.

The essence of the Pirah culture is explained very simply: “Live here and now. ” In their language there is only the present tense, because, according to the people, the only important thing that is worth communicating to others is what is experienced at that very moment.

Piraha believe that sleep is harmful

They were shocked when they found out that someone was sleeping for 8 hours. The people are sure that if you fall asleep for a long time, you can wake up as a different person. However, there is also an opinion that such a regime was formed due to the fact that the area where the people live is teeming with snakes. Therefore, they sleep in fits and starts for half an hour and no more than two hours a night.

They only distinguish between dark and light colors. Red and yellow confuse people, as well as green and blue.

The number of Pirah is only 800 people

Usually, representatives of primitive tribes would rather take their own lives than lose their honor and respect. But not a feast. They basically don’t understand what anger or despair is . “If Haaiohaaa dropped the fish into the water, that’s bad. No fish, no dinner. But what does Haaiohaaa have to do with it? ” – they just think.

The concepts of “century”, “time” and “history” are empty phrases for pirah, and almost none of them remember their grandparents. When asked what was the tribe before they laconic answer: “Everything is the same’.

Mothers don’t tell their children bedtime stories. In addition, here, in principle, no one remembers any stories: collective memory is built only on the personal experience of the oldest living member of the tribe.

Also, the piraha do not know what guilt and shame are. A husband can easily leave his wife if she is no longer young and pretty. Moreover, the woman will not be angry with him and will simply say something in the spirit:

“It happened because it happened, that’s all. So, we need to look for a new man.”

In their language there are no words for the left and right sides, and the people do not understand why this is necessary.

Piraha mothers do not know how many children they have.

But they distinguish them by their faces. The point is that this nation cannot count. Piraha do not even perceive the word “one”. However, they have concepts of “several” and “many”. That is, they can say that they have several children, but they cannot give the exact number.

Piraha show no interest in the achievements of modern civilization. Moreover, they completely do not understand the way of life of modern people. “ How can you sleep and eat so much? “- this is how the people think about white people. However, they began to wear clothes, and also used aluminum utensils, threads, matches and fishing tackle.

This culture lacks religion and the concept of God. Although belief in the otherworld is common in most cultures, piraha is useless.

Every few years, the inhabitants of the people take a new name for themselves, which corresponds to the next period of their life.

Due to the peculiar perception of time, this unusual people do not see the need to store food for future use. What’s more, they don’t treat food as significant at all. If you could not find something for lunch, then  you can skip lunch and eat the next day.

In the Pirah, everyone is equal

There is no social hierarchy. Perhaps that is why researchers note the amazing vitality of these people. In their tribe there is no envy, anger, theft, conspiracies and intrigues.

They don’t say thank you, sorry and please. In other words, they don’t have any courtesies. Piraha are perplexed why all this is needed, because they all treat each other so warmly without any formalities.

Missionary and linguist Daniel Everett wanted to teach Pirah all the benefits of civilization and lived for many years among these unhurried, constantly laughing and knowing no sins people. During this time, he suddenly became an atheist and changed his worldview. After all, the Pirahaha absolutely did not understand why to believe in someone whom no one saw, and why this someone influences the happiness and life of an individual.

Piraha do not suffer from mental disorders and depression. According to Everett, this nation has a phenomenal degree of life satisfaction, and without banned substances and antidepressants.

Piraha are sometimes called the happiest people on the planet.

According to some experts, while some people remember the past or spend time studying the features of other cultures, this people simply lives their own lives, smiles, laughs and knows no troubles.

Do you think a person from a civilized society cannot understand the inhabitants of the jungle? Or is there something attractive in their principles of life?

In this article:Brazilian jungle, Piraha