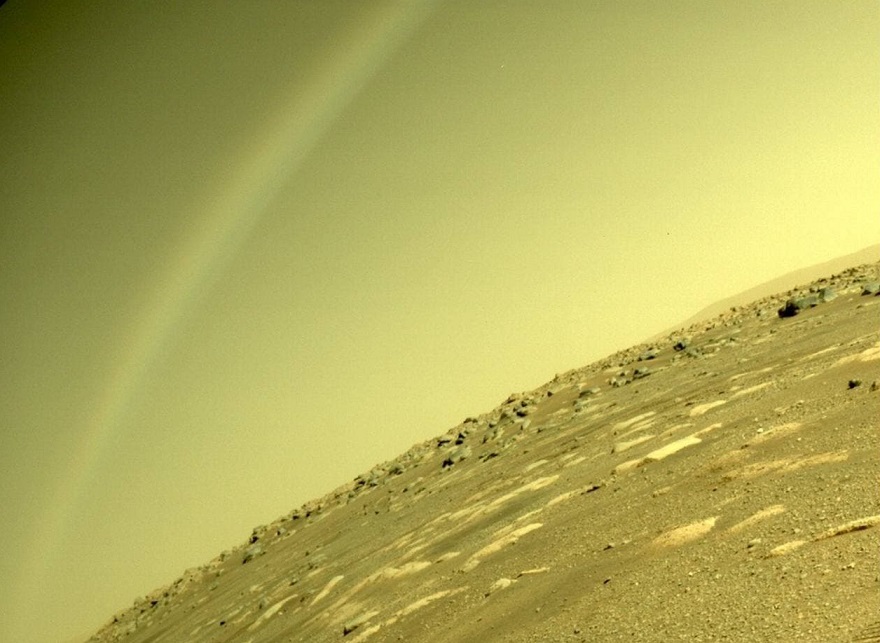 The Perseverance rover, sent by NASA to Mars, transmitted a photograph of the Martian rainbow to Earth. Yes, there is also a rainbow on the Red Planet, though very specific.

We are talking about a very unusual rainbow that arose from the dust present in the Martian air. Small particles in the atmosphere can refract light like water droplets, but a dusty rainbow, at the same time, is much inferior to its rainbow counterpart in brightness.

“Many have asked: Is that a rainbow on Mars? No. Rainbows aren’t possible here. Rainbows are created by light reflected off of round water droplets, but there isn’t enough water here to condense, and it’s too cold for liquid water in the atmosphere. This arc is a lens flare.”

Experts doubt that it is a rainbow in the picture, since this requires certain conditions, more precisely, the presence of water. However, as you know, it is not on Mars. Then what is it?

Scientists suggest that it is possible we see the so-called “ice rainbow”, which is similar to the optical halo phenomenon often observed on Earth. Some researchers believe that rainbows do not necessarily need water. Dispersed phenomena are possible in any atmosphere.

“In the Martian air there is a thousand times less water vapor than in the Earth’s atmosphere, so there can be no ordinary rainbow on Mars. But on the Red Planet there are dust rainbows, which also look very interesting,” NASA officials said.

The Perseverance rover prepares to launch the Ingenuity helicopter drone for a test flight on April 11. Ingenuity is the first man-made aircraft designed to fly in the atmosphere of another planet.

It is assumed that the drone will not only demonstrate the fundamental possibility of active flights in the Martian atmosphere, but will also be able to perform terrain reconnaissance for the Perseverance rover. NASA engineers have high hopes for the drone helicopter.