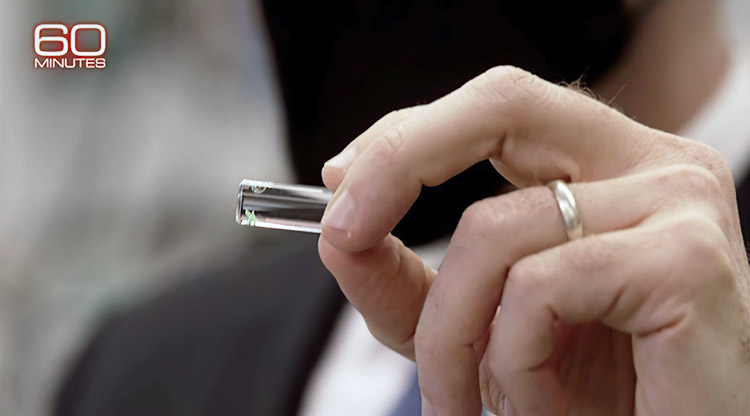 Scientists from the US Department of Defense propose using a microchip implanted under the skin of people, which will help to find out at an early stage whether the COVID-19 virus is developing in the body. Another development of the Pentagon was a filter for a dialysis machine, which is able to remove the virus from a patient’s blood by diffusion through a semi-permeable membrane. Meanwhile, new COVID-19 variants are detected, seemingly introducing a new, Super COVID virus combining 18 mutations.

The impetus for this development was the outbreak of the virus in 2020 aboard the American aircraft carrier Theodore Roosevelt, when 1,271 infections were recorded in 4,800 crew members.

The microchip is enclosed in a tissue-like gel to avoid inflammation and continuously performs blood tests. Tracking functions and other kinds of means of monitoring potential carriers of infection are not yet included in it.

“A chip is placed under the skin and alerts you if a typical chemical reaction occurs in the body – this signal means that tomorrow you will have symptoms. It’s like a check engine light in a car , Colonel Hepburn explained. – Sailors will be able to receive the signal, then independently draw blood and check themselves on the spot. This information can be obtained in 3-5 minutes. By shortening the time it takes to make a diagnosis and start treatment, you stop the infection on the way.”

DARPA’s second invention was a dialysis machine filter that removes the virus from the blood. Matt Hepburn gave an example of an experienced 4-day course of treatment given to “Patient # 16,” a serviceman’s wife with organ failure and septic shock.

After a few days, he said, the patient recovered completely. This therapy has already been approved by the US Food and Drug Administration for emergency use and has been used to treat nearly 300 patients.

Last year, Captain Brett Crozier, Commander of the USS Theodore Roosevelt, raised the alarm and sent an expressive letter to the US Navy about the spread of the virus on this nuclear powered Nimitz-class ship.

When information about the incident was leaked to the media, he was dismissed from office, but retained his rank and was honorably escorted by the crew. A Navy investigation revealed that Captain Crozier and his superior aboard the aircraft carrier Rear Admiral Stuart Baker made the wrong decision regarding the spread of the virus on the ship.

A super-COVID has been discovered, combining 18 variants

According to cityam.com, a new supervariant of the Covid-19 virus in Brazil is a combination of 18 different mutations, including the so-called Brazilian, British and South African strains. According to local media reports, scientists from the South American country have confirmed that the new strain, first discovered in the city of Belo Horizonte, contains several already known mutations.

“The strain shares characteristics with the variants that were already common in Brazil, but it also has new characteristics. It all looks as if all known variants have merged into one , ”says Renato Santana, virologist at the Federal University of Minas Gerais in an interview with the local daily G1.

While Renato Santana emphasizes that it is too early to say that the new strain is more infectious or deadly, he nonetheless says that it has characteristics of all those variants that are already associated with a higher risk of mortality.

Brazil has seen a rapid rise in Covid-19 infections in recent weeks, and according to Brazilian virologists, the rapidly growing number of critically ill people may be due to various mutations currently circulating in Brazil and beyond.

Fox News is writing about breakthroughs:  A new study from Israel shows that the South African variant of the coronavirus may, to some extent, “break through” through the Pfizer / BioNTech vaccine.

A team from Tel Aviv University and Clalit Health Services found that the prevalence of the South African variant among patients who received both doses of the vaccine was about eight times higher than among the unvaccinated – 5.4% versus 0.7%. The study compared more than 400 people who received at least one vaccine and contracted the coronavirus with the same number of infected and unvaccinated people.

Thus, another paradox is obtained: the vaccinated get sick 8 times more often than the unvaccinated. It would be understandable if it was the other way around – the vaccine is not very reliable and the vaccinated still get sick, but less often and in a mild form.

And here, not just more often, but more often by 800%, which is slightly more than any possible statistical error. It is difficult for us to even imagine what wonderful discoveries await ahead of us.