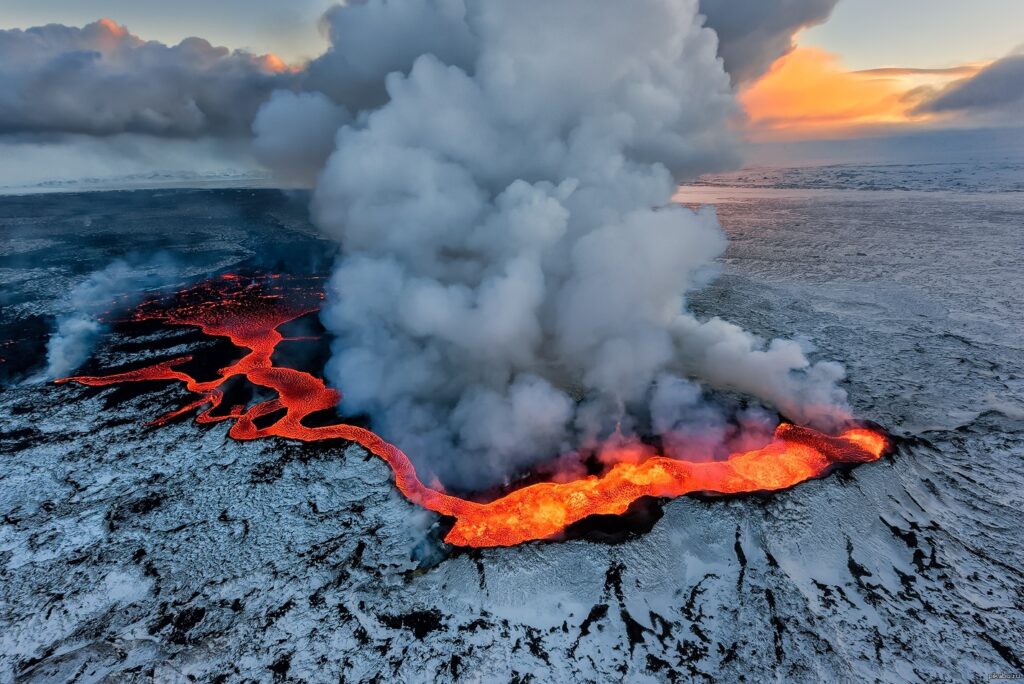 A magnitude 5.0 earthquake rocked Iceland tonight. At 00:42 a strong earthquake hit the Reykjanes Peninsula. It was felt in many parts of Sugurnes, in the metropolitan area and in the southwestern corner of the country.

Its source was located at a depth of more than 6.6 km, about a kilometer east-southeast of Fagradalsfjall. Three other earthquakes 3.0, 3.1 and 3.3 occurred at night, the first shortly before half past one, and the other two and seven minutes later.

Thus, seismic activity increased again after a slight decrease in the last hour before midnight.

Significant seismic activity was observed in the area until about 11 pm Saturday, and 24 magnitude 3 and higher earthquakes were recorded yesterday from midnight to midnight.

Seismic activity during the night and over the past 24 hours has been almost entirely confined to Fagradalsfjall and its immediate surroundings.

Representatives of the Civil Protection Office of the National Police Commissioner, the Meteorological Office, the police in Sugurnes and Grindavik gathered for an emergency meeting at half past three due to the earthquake that struck at night.

In a statement from the Civil Defense Service, there have been several magnitude 3 to 5 earthquakes in the area from Fagradalsfjall to Mount Torbjörn, at the foot of Grindvik, and therefore people in the city are understandably worried.

It is argued that earthquakes are most likely “the result of stress changes in the earth’s crust, not magma displacement. Therefore, they are not considered to be a short-term sign of an eruption. “

Iceland froze in anticipation, the question is not whether the volcano will erupt or not, the only question is when it will happen.

The beginning of the Little Ice Age

A recent article by Icelandic scientists describing the historical periods of volcanic eruptions in Iceland is interesting because the last time Icelandic volcanoes became active, it coincided with the beginning of the Little Ice Age.

“If an eruption occurs, it is likely to mark the beginning of a volcanic period that will last for several centuries,” – Magnus B. Sigurgeirsson said, geologist at ÍSOR Iceland GeoSurvey, a consulting and research institute for geothermal sciences and utilities.

Research shows that during the second half of the Holocene – a term used to describe a period that began about 11,700 years ago – volcanic systems on the Reykjanes Peninsula erupted every 900-1100 years. Less is known about the first part of the Holocene.

Each period of eruption seems to have lasted for about 500 years, during which time most volcanic systems appear to have been active, although usually not simultaneously.

Volcanic activity is characterized by eruptions, each of which lasts for several decades. Lava flows from volcanic fissures, which can be up to 12 km long.

It is roughly defined as the period from the 16th to the 19th century, but some experts prefer an alternative period from about 1300 to about 1850.

Scientists have noted three particularly cold periods, one beginning around 1650, another around 1770, and the last in 1850, all separated by intervals of slight warming.

Cases of slight warming are similar to many of what we see in our time and that are mistakenly introduced to the masses under the slogan “Global Warming” ..

This was likely due to warming elsewhere, while some other regions were colder, such as the tropical Pacific.

Average global temperatures are estimated to be similar to warming in the early mid-20th century. Possible causes of the Medieval Warm Period include increased solar activity, decreased volcanic activity, and changes in ocean circulation.

As we can see, this medieval period could have ended with something like a break in global warming for 18 years before the world got a little colder.

For reasons not related to science, but rather only to politics, today those who rule the world refuse to admit that the climate is measured by trends of decades, centuries and geological eras, and not by weather reports for a couple of years.

The eruption of volcanoes in Iceland will mark the beginning of the Global Cooling era. Prepare holiday banners with the words “Hello Ice Age!”

Advertisement. Scroll to continue reading.
In this article:Iceland, volcanic eruptions