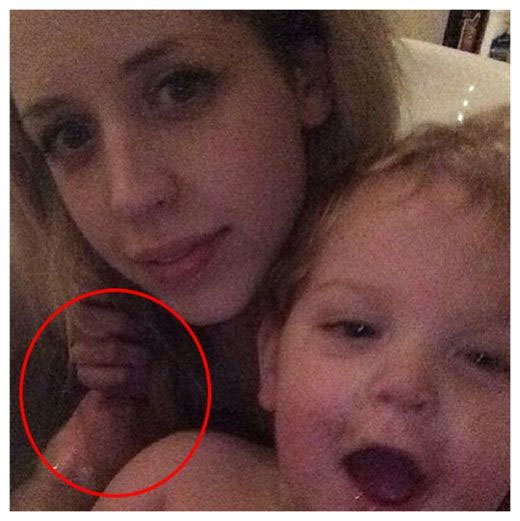 Mysterious: The ghostly hand can be seen to the left of Peaches’ head

Peaches Geldof claims a mysterious hand which appeared in a selfie she took belongs to a ghost.

She snapped the picture of herself with daughter Astala in the bathroom of her Kent home.

But when she looked at the photo she noticed the ghostly hand by the side of her head and posted it on Instagram saying: “Close up shot of the mystery ghost hand in pic I took of Astala and me In the bath!!

“And no that isn’t my hand- one of mine was round his waist to hold him during the photo, the other holding the camera to take the shot.”

She later posted that she had, had to leave the door of her room ajar in order to let some light “in case the ghost comes back.”

Geldof, daughter of Band Aid co-founder Sir Bob Geldof, said she had checked the council’s back catalogue and found out the 1920s building had been built by a wealthy man and his wife, who was pregnant at the time. She said the woman had given birth to a stillborn baby and that she was so grief-stricken she had gone mad and drowned herself in the bath.

She said: “Do you think that she is the ghost?? Seems like it seeing as I saw the ghost in the bath tub! Terrifying!!!!!!!”

She said, however, that the “presence” she felt in the house was “friendly” and “rather maternal”

She said: “Maybe she is just making her presence known because she loves having the babies around????? I hope so!!!!”

In this article:ghost, hand, Peaches Geldof