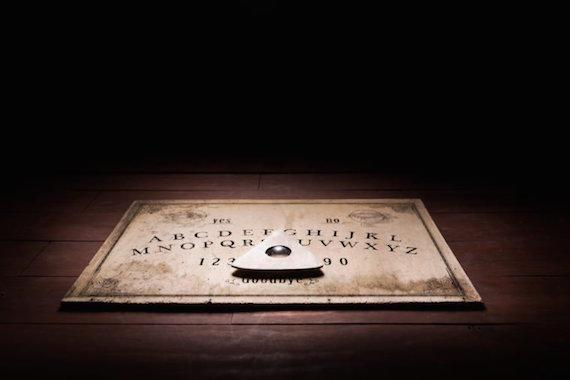 The Guinness World Records committee has never been shy of judging weird activities, but it has now joined the paranormal world with its involvement in determining if a giant Ouija board in Salem, Massachusetts, and a huge dreamcatcher in Russia are of world record sizes. Are they? Will they attract world record demons and spirits? Will Guinness be there to measure them?

“On October 12, 2019, Rick “Ormortis” Schreck, vice president and director for the Talking Board Historical Society, will unleash the beast, crushing the current Guinness world record set on October 28, 2016 by almost two-and-a-half times the size. To put this in perspective, because “size matters”, the finished board is as long as a 72-foot brontosaurus, weighs more than a six-ton elephant, and is large enough to park five eighteen-wheelers on it!”

For those not quick with truck-to-square-feet or elephant-to-pound conversions, the Ouija board created by Rick Ormortis (get it?) weighs about 9,000 pounds, covers 3,168 square feet, is made of 99 individual sheets of plywood and is coated with over 20 gallons of wood stain. (Photos of it can be seen here.) While those are impressive measurements for the appropriately-named Ouijazilla, the planchette (the small platform used to move around the board) deserves special attention. Even though it’s 15.5 feet long, 10 feet wide and weighs about 400 pounds, the giant planchette can easily be moved around the board by one person … or one giant spirit or demon.

Schreck is a Ouija board collector and maker from New Jersey, so he knows about the alleged powers of the boards. He’s been working on Ouijazilla since June 2018, two years after the Guinness people named a board painted on the roof of the Grand Midway Hotel in Windber, Pennsylvania, as the world’s largest at around 1,302 square feet. You can do the math yourself and see why Ripley’s Believe It or Not named Ouijazilla the new world record holder. Some sites are reporting that Guinness agrees, although its website still lists the one in Pennsylvania as the biggest. As for giant spirits and demons, there have been no sightings yet, but this is Salem – it’s only a matter of time.

“I want the world to really start changing. There are a lot of angry people now. It’s an attempt for the people to come together for good.”

Meanwhile in Russia, Bibigul Mamaeva, a Kazakh shaman who claims to be a “direct descendent” of Genghis Khan (a 2003 study found evidence that Genghis Khan’s DNA is present in about 16 million men alive today), made an attempt to regain her Guinness-recognized record for the world’s largest dreamcatcher with her new brushwood circle which measures 12.63 meters (41.43 feet) in diameter. Mamaeva claims she held the record until 2016 when it was broken by Lithuanian artist Vladimir Panarin, whose ring measured 10.14 meters (33 ft 3.21 in) in diameter and weighed 156 kg (343.9 lb). Mamaeva’s may be a bit lighter due to the use of brushwood and yarn decorated with beads and feathers. (Watch a video of her building it here.) While she expects Guinness to recognize her record, there’s been no official word yet.

Can we hang one over Washington, Moscow and Beijing?

As for catching giant Russian spirits, the video and photo on RT.com show Mamaeva’s dreamcatcher still on the ground – not the prime location for plucking demons from the sky before they land on a sleeping child – the most common use for the spirit devices. Will it fulfill her goal of getting “people to come together for good”? That depends on how small the hole in the center of the dreamcatcher is to prevent certain world leaders from making it through.

Giant Ouija boards and huge dreamcatchers. Do we need more signs that the world is worried?

Advertisement. Scroll to continue reading.
In this article:demons and spirits, giant Russian spirits