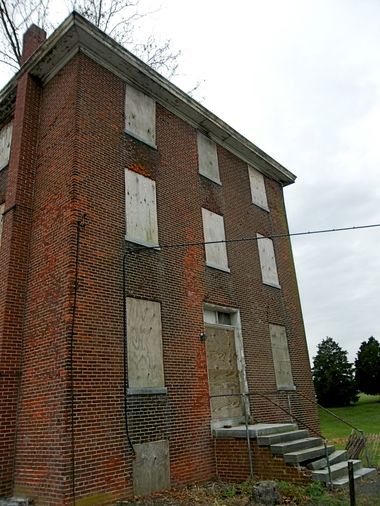 In 1870, Salem County constructed a county insane asylum on what is now Route 45 in Mannington Township, to address a lack of state action to address overcrowding in state-run facilities.

Known as The County Farm, the county almshouse and asylum were located adjacent to each other and housed the county’s “insane” until 1925 when the residents were then moved to the state facility, making room for area’s poor residents to move in.

Later, the building was used by groups and clubs for a few years before being abandoned and boarded up, which is how it has remained for nearly seven years.

However, after a recent paranormal investigation at the asylum with Jersey Unique Minds Paranormal Society, it seems some of those who spent time in this three-story Italiante cube building never actually left.

JUMPS Founder Doug Hogate Jr. asked authorities if the group could get inside the building and was granted permission.

At first, the scariest thing about being inside the asylum was dodging the piles of animal feces and dead insects.

Looking beyond the peeling paint and stained carpets, I could see that this was once a building that was very residential-like, but now is only home to some wild animals who, luckily, must have been out hunting while we explored the three floors.

When investigating a location for paranormal activity, evidence of lingering spirits is not always readily evident.

Fortunately, a fellow investigator turned on her digital voice recorder as soon as we entered through the main door to the asylum.

“As soon as this recorder began, an EVP (electronic voice phenomenon) was captured,” he said. “Immediately, it sounds like a male voice saying ‘Go down.’ If it is saying ‘go down,’ then the experiences and other evidence we found in the basement become more interesting.”

Having not heard the suggestion to go to the basement upon our arrival, I accompanied two other investigators up to the third floor.

While standing in the middle of the third-floor landing, equipped with my K-2 meter, digital voice recorder and camera, I neither felt nor heard anything out of the ordinary. My K-2 meter remained still and my voice recorder didn’t pick up anything but our conversation which included my statement that, “All this feels like is standing in the dark in a creepy old building.”

Little did I know, the night wouldn’t remain so calm.

Just before wrapping up the investigation, myself, Hogate and two other investigators decided to go down to the basement one more time, with as much equipment as we could take.

We set up a video camera with night-vision, three audio recorders, two K-2 meters, a Mel meter — a device that reads electromagnetic fields and temperature — and a digital thermometer.

During earlier trips to the basement, investigators experienced uneasy feelings, heard movement and witnessed batteries in various objects draining quickly, including my digital camera which shut off entirely, but regained full charge once I was out of the basement.

Once we were settled, we attempted to make contact with anyone who may be in the basement. After a while, the lights on the K-2 meters began reacting to our questions, so we asked the entity to light up the meter on the left for a “yes” answer, and the one on the right for a “no.” One of the six rooms in the basement of the Salem County Insane Asylum.Staff photo by Kelly Roncace

The interaction continued calmly for about 20 minutes until Hogate asked if the spirit was happy we were there. There was no response from either meter.

“Do you want us to leave?” Hogate asked.

Immediately the meters lit up to full capacity and remained glowing with hardly any fluctuation.

I have always said if I was ever investigating and was told to “Get out,” or felt that whatever was present didn’t want me there, I was gone.

Later, when I listened to my digital recorder, I discovered that not only were the K-2 meters effected when Hogate asked if we should leave, but the DVR also picked up some clues.

What had previously been a quiet listen, suddenly my recorder came to life with groans, sounds of motion and what sounded like aggravated breathing very close to the microphone.

Hogate, who is braver than I, returned to the basement with another group of investigators, one who interrogated the spirit about age.

“The meter reacted when asked if the ghost was a child,” Hogate said. “Then, the investigator stated that he would start mentioning ages, and instructed that when he said the correct age to make the meters light. Starting with 3, he began slowly counting up, giving the possible child presence a chance to respond. When he reached the age of 6, all the meters began lighting up.”

The team continued the investigation and finally concluded that the presence was possibly a 6-year-old child who was sick — possibly mentally ill — and was left there by his or her parents.

Legend has it that patients were chained up in the six individual rooms that make up the basement.

This could be the reason why most of the evening’s haunting experiences occurred in that creepy dungeon under ground.

To hear more EVPs captured at the Salem County Insane Asylum and for more information, visit http://www.jumps.2fear.com/ or find JUMPS on Facebook.

In this article:insane asylum, Paranormal, Salem