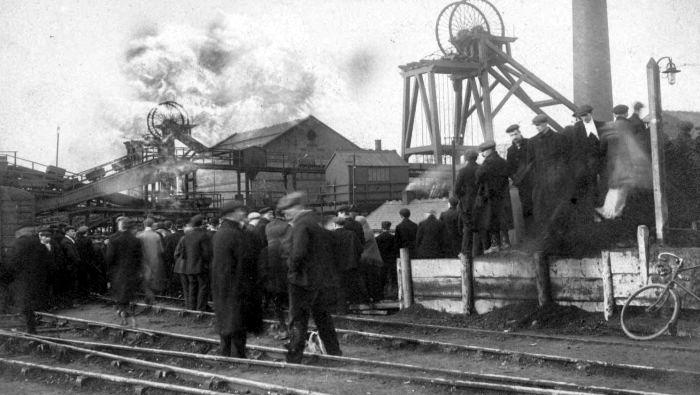 In the 80 years since the biggest disaster in the UK mines, no one has thought of erecting a normal monument to the dead miners. And the ghosts didn’t like it very much.

One of the most impressive types of ghosts, these are the ones that cannot rest until there is justice for the circumstances of their death. For example, murder victims may visit places where they were killed or buried in the hope of bringing the perpetrator to justice.

These ghosts in the West are called “ghosts with a purpose” and the incident in the English city of Bolton is one of the clearest examples of this manifestation. Bolton is a working-class town in the north of England. It began to develop actively in the Victorian era, when there was an industrial rise in Great Britain and coal mining became its main industry.

There were so many coal mines here that Bolton was one of the centers of coal mining in Britain during that era. However, by the early twentieth century, Bolton’s coal mines were suddenly depleted as rich surface seams ran out. In search of coal, miners now had to “bite” into the ground deeper and deeper.

The Pretoria Pit mine quickly became one of the deepest and most dangerous miners to work with. Moreover, many of these miners were children or adolescents, because in those years only the poor went to such harmful work, among whom it was considered normal to earn their living from the age of 7-8. They simply could not quit, because they simply would not find another job in a mining town and would face the risk of poverty and starvation. Therefore, they humbly continued every day to descend underground, praying that they would return in the evening.

Even the strange supernatural omens, though frightening them, did not become a reason for not going to work. These omens included the corpses of black crows that somehow ended up in even the deepest levels of the mine, as well as an incomprehensible noise that greatly frightened the horses driving the minecarts. And in 1910, a disaster struck at the Pit Pretoria mine. There are several theories about it, but the main one is considered to be a small deep collapse, which released natural gas into the lower mines and exploded.

The explosion killed almost all the miners who went underground on that ill-fated day – 344 people. Only three were able to reach the surface, of which two soon died of their wounds. It was the worst industrial disaster in the UK and left a deep psychological scar on the locals. Eighty years later, in the early 1990s, memories of the catastrophe faded away, even the children of the miners who died were no longer alive. Bolton no longer held an annual memorial service for the dead miners, and many locals heard of the Pretoria Pit explosion only briefly in class.

However, the spirits of the dead were not ready to sink into oblivion. And suddenly, a series of intense paranormal activity erupted in Bolton County, witnessed by hundreds of people. It began in 1993, when local resident Brian Lowe was driving along Platt Lane, an old dirt road that ran very close to the place where the heaped Pit Pretoria mine was. And suddenly Lowe saw dozens and dozens of brilliant human eyes that looked at him from the darkness of an abandoned mining warehouse, which was on the side of the road.

Frightened, Lowe added speed to get past this place, but then he heard a strange pop. It was loud enough and Lowe thought that his tire had burst, but the car continued to drive smoothly. However, when Lowe reached the city, there he was met by a frightened friend who said that there had recently been an explosion near Platt Lane, which was seen by many local residents. In the darkness of the night, a large flash of light was very noticeable.

The police were called to the old warehouse, the road was blocked, but nothing unusual was found. No traces of the explosion and the destruction it created. But then, over the course of 17 years, many of those who approached the Pretoria Pit saw unusual things – the bodies of many dead people lying by the road, limping and waddling figures that walked somewhere through the bushes and the darkness of the night. AND SMELL. The smell of burnt meat.

Many also reported hearing the sounds of an explosion, but again they found no evidence that something exploded there. As well as signs that some pranksters are working here who wander near the mine at night and scare passers-by and drivers. No sign of any people at all near the Pretoria Pit. This is understandable, the locals usually avoided this place as best they could. One day a policeman arrived at another call about an explosion or about observing corpses near the road and saw with his own eyes a severed human hand hanging from a tree branch. And right before his eyes, this hand disappeared, disappeared into thin air.

After that, a whole group of local residents gathered, who finally realized that this was not a joke or a practical joke. They decided that the ghosts of the dead miners wanted something and that it should be done to calm them down. It was decided to erect a monument to them, which for some reason none of the local authorities did for 80 years. When the memorial was built and the names of all the dead miners were indicated on it, a special memorial service was held and the priest consecrated the memorial. Since that day, there have been NO other reports of paranormal activity near the Pretoria Pit.

Advertisement. Scroll to continue reading.
In this article:Pit Pretoria mine, UK ghosts