From 1475 BCE to 1275 BCE, the Mitanni Empire ruled over the northern Euphrates-Tigris region in what is now Iraq. It’s only rival at that time was Egypt, but when the Hittite Empire began gaining power, they joined together against it. That wasn’t enough, and Mitanni was eventually defeated by the Hittite and assimilated so completely that very little is known of the dynasty. That may change with the discovery of a MIttani palace in Iraqi Kurdistan after drought exposed it in a reservoir.

“The find is one of the most important archaeological discoveries in the region in recent decades and illustrates the success of the Kurdish-German cooperation.” Cooperation is always a good thing, especially at archeological sites in areas of political strife. Kurdish archaeologist Hasan Ahmed Qasim was working with Dr. Hasan Ahmed Qasim and Dr. Ivana Puljiz on a joint research project between the University of Tübingen and the Kurdistan Archaeology Organization (KAO) in cooperation with the Duhok Directorate of Antiquities after a drought caused the water level of the Mosul Reservoir in northern Iraq to drop unexpectedly and substantially, revealing the remains of a Bronze Age palace which is believed to have once stood on the edge of the Tigris River valley in the Mitanni town of Kemune. The site was first discovered in 2010, but the recent drop in water level was the first change archeologists had to do some serious digging.

According to the press release by the University of Tübingen, the palace was a solid structure with two-meters thick mud walls, some standing over two meters high. A number of rooms were identified and those contained items that may finally shed some light on the Mitanni empire. One contained ten cuneiform clay tablets which suggest that Kemune may have once be the ancient city of Zachiku, which was thought to have existed in that area 400 years before. (Photos of the site here.) However, it’s what was on the walls that got the archeologists most excited, according to Puljiz.

“We also found remnants of murals in bright shades of red and blue. Mural paintings may have been a typical feature of palaces in the 2nd millennium BC, but they have seldom been preserved. Therefore, the discovery of murals in Kemune is an archaeological sensation.”

This is yet another important archeological site covered by the waters of a dam – in this case, the Mosul Reservoir of the Mosul Dam, the largest dam in Iraq. Completed in 1986, provides electricity to the 1.7 million residents of Mosul … and also some anxiety. The dam was briefly taken over by ISIS in 2014 and it has required constant maintenance and repairs due to being built on top of gypsum, a soft mineral that dissolves in contact with water. Whose bright idea was this? Saddam Hussein. 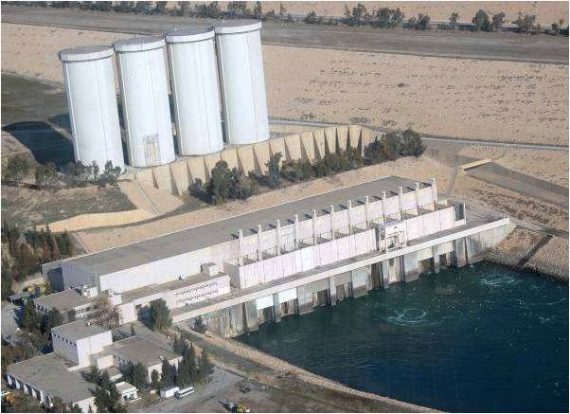 “The Mittani empire is one of the least-explored ancient Near Eastern empires. So far, information about the palaces of the Mittani period has only been found in Tell Brak in Syria and in the cities of Nuzi and Alalach on the outskirts of the empire.”

Saddam may be gone, but instability remains – both in the dam and the region. This appears to be an important central palace of the Mittani Empire, and could help locate its capital, which has remained a mystery in an empire of mysteries.

Will the researchers be able to uncover the secrets of the Mittani Empire and outrace the instability of the governments and the dam? Cooperation will help. So will luck. And don’t forget the climate change that caused the drought.

Archeology is a complicated science.

In this article:Kurdistan, Mitanni Empire