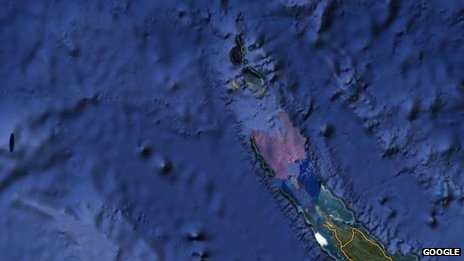 A South Pacific island, shown on marine charts and world maps as well as on Google Earth, does not exist, Australian scientists say.
The supposedly sizeable strip of land, named Sandy Island on Google maps, was positioned midway between Australia and French-governed New Caledonia.
But when scientists from the University of Sydney went to the area, they found only the blue ocean of the Coral Sea.
The phantom island has featured in publications for at least a decade.
Scientist Maria Seton, who was on the ship, said that the team was expecting land, not 1,400m (4,620ft) of deep ocean.
“We wanted to check it out because the navigation charts on board the ship showed a water depth of 1,400m in that area – very deep,” Dr Seton, from the University of Sydney, told the AFP news agency after the 25-day voyage.
“It’s on Google Earth and other maps so we went to check and there was no island. We’re really puzzled. It’s quite bizarre.
“How did it find its way onto the maps? We just don’t know, but we plan to follow up and find out.”
Australian newspapers have reported that the invisible island would sit within French territorial waters if it existed – but does not feature on French government maps.
Australia’s Hydrographic Service, which produces the country’s nautical charts, says its appearance on some scientific maps and Google Earth could just be the result of human error, repeated down the years.
What do you think?

In this article:Australia, BBC, google, Google Earth, University of Sydney