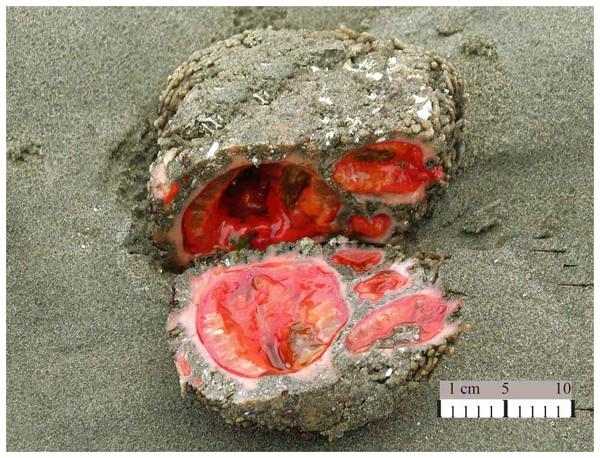 Fantasy literature is full of creatures that are basically living rock. From Tolkein’s trolls that turn to stone in daylight, to Pratchett’s silicon based life-forms of the same name. As usual however, the forces of natural selection have come up with something beyond our imagining.

The Pyura chilensis is a marine filter feeder related to sea squirts, with no brain or sensory organs. Superficially they bear some resemblance to sea urchins, but have a very different evolutionary history. They inhabit intertidal zones off Chile and Peru and are a popular dish in those countries. However, their most remarkable feature is how much they resemble some organs stuck inside a rock.

P chilensis sex life is exotic too, from a mammalian perspective. They are born male, but become hermaphroditic at “puberty”. This means that, while they usually breed with other members of their species, isolated individuals can, at a pinch, go fuck themselves. Cross fertilization is more frequent, even when only two specimens are placed together, but the offspring of self-fertilization appeared to be just as successful as those with two parents and researchers concluded “selfing is an advantageous alternative when sources of allosperm are scarce.”

The other remarkable thing about P chilensis is the concentration of vanadium in its blood. Along with other ascidians, P chilensis have levels of vanadium millions of times higher than the sea water in which they live. It is unclear what benefit they obtain from the heavy metal, which is toxic in fairly small quantities to most other animals, or indeed whether it is a problem for people who feed on them. However, in light of the fascinating chemistry of vanadium and its potential significance as the storage medium for future energy, it may turn out we have a lot to learn from these creatures.