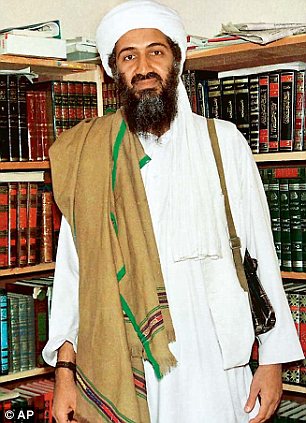 Osama Bin Laden WAS NOT buried at sea, but flown to the U.S. for cremation at secret location, claims intelligence boss in leaked email

The fate of Osama bin Laden’s remains have been called into question after emails leaked from an intelligence analysis firm say the body of the terror leader was actually sent to the U.S. for cremation.
Terrorist: Osama bin Laden was killed on May 1, 2011 in the now-famous raid by Navy SEAL Team Six at his secret Pakistan compound According to the emails, the Al Qaeda boss was shot and killed during the famous Navy SEAL Team Six raid on his compound in Abbottabad, Pakistan, was transported back to the U.S. and cremated. The emails were allegedly obtained by the hacker group Anonymous from Stratfor, an organisation dealing with analysis of intelligence and geopolitical analysis.
It’s also known as the ‘Shadow CIA’.
Last week, Anonymous announced that it had gotten access to 2.7million of the firm’s confidential correspondences, and said they could provide ‘the smoking gun for a number of crimes’.
The hackers said Stratfor, based in Austin, Texas, were ‘clueless’ when it came to database security.
After bin Laden was killed in the famous raid in Pakistan on May 2 2011, the Obama administration said his body was buried at sea off the USS Carl Vinson – in accordance with Islamic tradition. But in a particular set of emails given to WikiLeaks, the firm’s vice president for intelligence, Fred Burton, says he doubts the official White House version of what happened to bin Laden’s body. Stratfor’s vice-president for intelligence, Fred Burton, says the body was ‘bound for Dover, [Delaware] on [a] CIA plane’ and ‘onward to the Armed Forces Institute of Pathology in Bethesda [Maryland]’. The claims are sure to stoke conspiracy theorists, especially since the Armed Forces Institute of Pathology that Burton refers to closed its doors on September 15, 2011, four months after bin Laden’s death. In another email, Burton said: ‘If body dumped at sea, which I doubt, the touch is very Adolf Eichmann like. The Tribe did the same thing with the Nazi’s ashes’.
‘Eichmann was seen alive for many months on trial before being sentenced to death and executed. No one wanted a monument to him so they cremated him.’
WHO IS ADOLF EICHMANN?
Emails purportedly leaked from the intelligence analysis firm Stratfor make mention of Adolf Eichmann, a Nazi lieutenant and a major figure of World War II. Eichmann, pictured above, is known as a major architect of the Holocaust. After World War II ended in 1945, he was caught by U.S. forces, and escaped custody after he gave them a phony name. Eichmann fled to Italy, where he was able to obtain a humanitarian passport.
By 1950, he was in Buenos Aires, Argentina, where he lived for years until he was captured by the Israeli spy agency the Mossad in 1960. War crimes and crimes against humanity were among the charges he faced when he was found guilty in an Israeli court in 1962. He was hanged, cremated, and his ashes were spread over the Mediterranean Sea.
Stratfor CEO George Friedman responded: ‘But i dont know anyone who claimed he wasnt eicjhman [sic]. No comparison with suddenly burying him at sea without any chance to view him which i doubt happened [sic]’.
In a February 27 statement, Stratfor said: In December, thieves compromised Stratfor’s data systems and stole a large number of company emails, along with other private information of Stratfor readers, subscribers and employees. Those stolen emails apparently will be published by Wikileaks. This is a deplorable, unfortunate – and illegal – breach of privacy.
‘Some of the emails may be forged or altered to include inaccuracies; some may be authentic. We will not validate either. Nor will we explain the thinking that went into them. Having had our property stolen, we will not be victimized twice by submitting to questioning about them.’ Stratfor, which is not affiliated with the U.S. government, would not comment further.
The emails were revealed as it was reported that a members of LulzSec an offshoot of Anonymous, were arrested by the FBI. An agency official told Fox News that the arrests were ‘devastating’ blow to the organisation, saying: ‘We’re chopping off the head of LulzSec.’ The ‘Adolf Eichmann’ referred to by Burton was a Nazi lieutenant and a major architect of the Holocaust.
http://www.dailymail.co.uk/news/article-2111001/Osama-bin-Laden-WAS-NOT-buried-sea-flown-US-cremation-leaked-emails-reveal.html
In this article:Adolf Eichmann, emails, Navy SEAL, Osama bin Laden