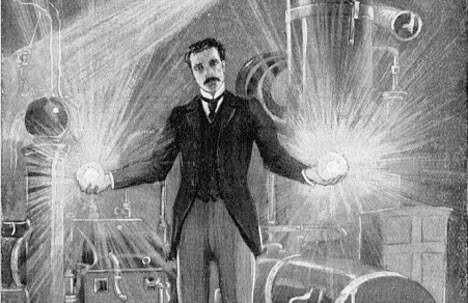 In a world of problems and solutions, few ideas spur both immediate hope and skepticism as the idea of free energy, and, on the brink of ecological disaster, nothing may be of greater importance to the human race.

The story of Nikola Tesla is a remarkable reminder of how our economic, political and media systems create our reality, because it shows how human ingenuity can be co-opted, shut-down, taken-over and hushed by powerful people with financial interests at stake. Fortunately, the legacy of Tesla lives on and people are now more interested than ever in his theories about cosmic energy and his patents for energy systems that could offer promise for liberating earth from dependence on fossil fuels.

Could it be that his vision has finally come to fruition and has been made available to the public, some 100 years after his patent for a fuel-less electricity generator?

“This new power for the driving of the world’s machinery will be derived from the energy which operates the universe, the cosmic energy, whose central source for the earth is the sun and which is everywhere present in unlimited quantities.” -Nikola Tesla

In March of 2014, a small group of independent engineers and developers released to the public open-source plans for a continuously running fuel-less electricity generator based on a patent by Nikola Tesla, and re-designed by inventor James Robitaille. Calling it the Quantum Energy Generator, or QEG, the portable device is supposedly capable of producing enough electricity to power a modern home, and is about the size and weight of a home gas generator.

“The Quantum Electric Generator system (QEG) is an adaptation of one of Nikola Tesla’s many patented electrical generator / dynamo / alternator designs. The particular patent referenced is No. 511,916, titled simply “Electric Generator”, and dated January 2, 1894 (see back of this manual). The adaptation is a conversion from a linear system, to a rotary system.

The QEG prototype is scaled to produce electrical power in the range of 10-15 kW (kilowatts) continuously, and can be set up to provide either 120 Volt or 230-240 Volt single phase output. We are also planning future designs to provide 3-phase power.” [Fix The World]

Developed by an organization known as the ‘Fix the World Council,’ and promoted by the lively Hopegirl, the prototype for the QEG was recently crowd-funded by over 600 independent contributors, and the plans for the QEG have been made available to the public for download here:

This means that the public now has access to the technical designs for this free-energy device, and if it works, and if it proves to be a viable option for creating electrical energy, then we may finally have the opportunity to bypass the energy monopoly and spread the technology of free energy to the world. In addition to downloading the publicly available open-source plans, people may also be able to purchase a pre-manufactured unit from an affiliated firm, so the race is now on for independent engineers and citizens to verify the efficacy of this declared revolution in energy.

“An effective way to understand the operating principal of the QEG is to think of it as a high-powered self-resonant oscillator (what they used to call a ‘multivibrator’), adapted to transform high-voltage pulses (15 to 25kV) into line voltage AC output, at current levels up to 120A. In today’s alternative energy terminology, it would be a type of resonance machine.

The circuitry that develops high power in this device is really based on an existing but under-utilized power oscillator configuration, however, the ‘quantum’ part of the design has to do with how the generator is started. Conventional alternators (AC generators) usually have a device called an ‘exciter coil’. This coil is usually a smaller, separate rotor winding that provides an AC voltage that is rectified and used to power the generator’s field coil(s).

In the QEG, there is no internal, common exciter coil, and no rotor windings. In addition, to look at the circuit diagram, it is not apparent where the input power comes from to start resonance, and this is key; the QEG exciter coil is external to the generator, and the excitation signal is conducted through the quantum field (zero point) into the generator core, to start oscillation. Once the machine builds up to the resonant frequency, it powers itself (self running).” –James M. Robitaille​

Given the decades long propaganda campaign against free-energy, it will no doubt take some convincing to first prove to the public that harnessing cosmic or zero-point energy is possible, and then it will surely face a mainstream media blackout as well as persecution from government and industry.

Never-the-less, this is an exciting announcement and we challenge our readers to get the word out to help prove if this design is in fact what it claims to be.

Please have a look at the plans for the QEG, and pass them along to anyone who may be able to assist in the effort to verify and proliferate this technology.

Terence Newton is a staff writer for WakingTimes.com, interested primarily with issues related to science, the human mind, and human consciousness.