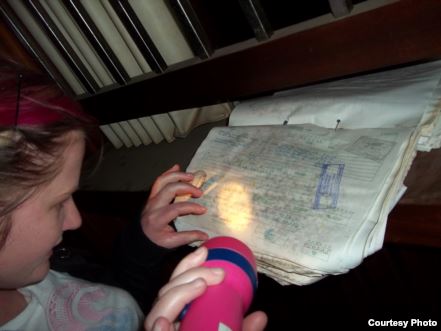 PRETORIA, SOUTH AFRICA — A pouting Marilyn Monroe looks down with smoldering eyes from a wall poster on two bulky, bearded men tucking into bloody T-bone steaks at the bar counter of a suburban restaurant in Pretoria.

The venue is filled with people who are eating, talking and laughing – blissfully unaware that the popular hangout is apparently haunted in recent years by two ghosts said to have terrified staff members cleaning up after hours.

“The pub’s said to have one very dark spirit at the bathroom area; he died there during a fight over (a game of) pool,” said Taryn Oliver, case manager for the Gauteng Paranormal Society (GPS). “The other spirit is in the bar area – an old guy who likes to touch women. A medium confirmed this.”
A photograph taken by a GPS member during the group’s investigation of the premises shows a long, dark but translucent shadow hovering high above customers near a fireplace.

“This is a common manifestation of a spirit as captured with our photographic equipment,” said Olivier. “You usually won’t see it with the naked eye.”

The GPS probes supernatural sightings and “paranormal events” across the province of Gauteng.

“Paranormal to us means anything from poltergeists to demons, but mostly we come across your normal ghosts – the spirits of people who have died that haven’t found rest yet,” Olivier told VOA.

Energy spikes on the K2

But perhaps the organization’s most important apparatus is a K2 – a type of EMF meter that uses LED lights to measure the strength of an energy field. Olivier describes paranormal entities as “bundles of energy.”

“The K2 catches energy spikes,” she says. “The moment we walk into a site, we will do a base reading. Normal areas with no electricity leakages will have readings of between zero and one. So, the moment we have an investigation and the meter spikes up to three, seven, we know obviously something is there…”

Olivier recalled visiting a house where an EMF meter peaked to a reading of 1,500. “That was shocking, considering that the highest we (previously) ever got was 32. Our technical guys established that there were no electrical leakages in that house that could cause that dramatic energy spike.”

Olivier added that the GPS has so far been unable to establish the nature of the paranormal phenomenon present in the house.

“I think it would be a very powerful spirit, and very active, or it could be that there are multiple spirits there,” she speculated. “We’ll have to investigate further, maybe using a medium to contact the spirits as well.”

Olivier said she’d been involved in many “fascinating” cases but one that “sticks” in her mind is a probe of “weird happenings” at an abandoned hospital in Kempton Park, east of Johannesburg.

“We also made audio recordings there and there was something very strange on one of those tapes. It was very loud, like a man that took in his breath. We have no logical explanation for that sound.”

Then, at another private residence she said she recorded a tune being whistled by an invisible entity.

“I played it (the audio) back to the (home) owner… and she said her (deceased) father used to hum that tune.  That’s how we knew that her father’s spirit was active in that house,” said Olivier. The GPS had one of its “greatest” experiences at an old hotel in KwaZulu-Natal province’s majestic Drakensberg Mountains, according to the case manager.

“Our two lead investigators walked through the kitchen, into the ballroom and up a staircase. And then just half way up the stairs the apparition would disappear. It was like a loop that the entity was walking. They caught it with the K2 meter.

On another occasion the GPS set up its equipment at a site near De Deur, south of Johannesburg, where “something terrible” happened a few years ago, said Olivier.

“A farmer had a teenage daughter, and at night she would slip out to visit her boyfriend and they would go on motorcycle drives – even though her father had forbidden her to do this. The farmer decided to do something to scare them.

“So he had taken barbed wire and put it around a tree. From one tree he span (sic) it over the road, to the other tree – just to knock them off the motorcycle. But unfortunately when they were driving past (they were going very fast and) it actually decapitated both of them…”

Since then, said Olivier, there had been regular reports of paranormal activity near the scene of the deaths.

“If you are on that road in the evenings you’ll see a ball of light coming up to that area, and then just vanish. Some of our team members have seen it. There are some of the public that I know have seen it.” They tried to capture it on their equipment “… but we didn’t get anything…”

Olivier is concerned with an increase in people contacting her to report “very violent” paranormal incidents. She described people being pressed down on their beds, others with unexplained scratch marks on their bodies, and “A lot of people report being thrown around by an unseen force…”

She maintained that such physical, supernatural assaults are evidence of attacks by demons.

“The first thing I ask people who report such things is: ‘Have you played Ouija board or have you been involved in Satanism?’ Dabbling in Satanism and playing games where you try to contact the dead is very, very dangerous,” Olivier asserted, because they “open people up” and allow “demonic entities to come through.”

She said the demons then “attach” to these people to “feed” on their energy.

“A lot of people might get sick. Some people will get angry easily; that demonic presence will have a massively negative influence in your life. You might start drinking heavily and taking drugs; you may lose your family and your job; get violent…”

To any skeptics Olivier smiles and comments: “We human beings think we’ve found all the answers to everything. But we haven’t even scratched the surface of everything that’s out there…”

More afraid of criminals, than ghosts

Olivier said the GPS would “love” to do more to help people suffering because of the paranormal, “but as we explain to them, our job is as researchers. Our job is to collect information that will give people a better understanding of paranormal events in South Africa.

“There are other people such as priests and demonologists and mediums who are much better-qualified to help people overcome supernatural threats than we are, and we refer our clients to those people.”

In the near future Olivier said the GPS planned to focus on “boosting investigative capacity” and buying better-quality equipment, as it continues its quest to capture incontrovertible evidence of paranormal activity.

And, despite constant involvement with mysterious forces that would terrify most people, Olivier emphasized: “Hunting for ghosts isn’t scary at all when compared with the other dangers we face out there in the field in Gauteng.”

She explained, laughing: “Like if we want to go to a graveyard, we’re more afraid of being hijacked (carjacked) there than of seeing a ghost!”