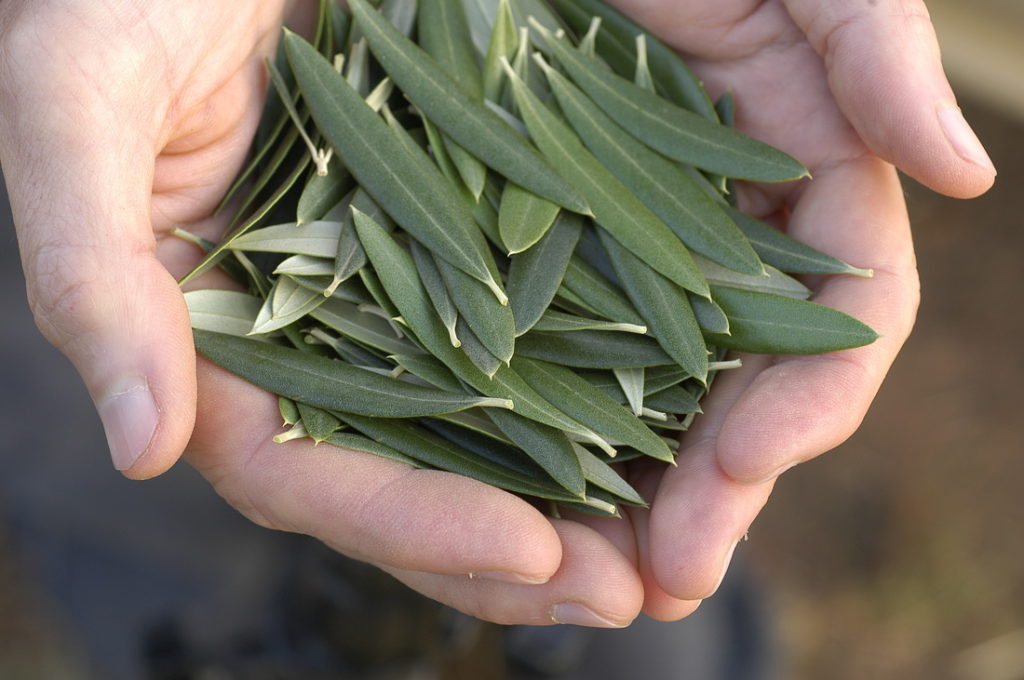 Scientists have isolated the unique molecule that provides olive oil with its multitude of health and life-extending benefits. Known as oleuropein, it is the polyphenol that can help lower bad cholesterol and blood pressure, prevent cancer, protect against oxidative damage, and help guard against cognitive decline.1,2 Oleuropein provides the distinctive tangy, pungent, almost bitter flavor found in high quality extra virgin olive oils.2 It’s also responsible for most of olive oil’s antioxidant, anti-inflammatory, and disease-fighting characteristics.2-4 In fact, when oleuropein was given to animals with tumors, the tumors completely regressed and disappeared in 9 to 12 days!5

The olive tree (Olea europaea) produces oleuropein abundantly in its leaves as well as in the olive fruit itself, and special processing techniques now allow for the extraction of a stable, standardized form of oleuropein. That means that consumers can have access to one of the most beneficial components of olive oil without the necessity of consuming excessive amounts of olive oil.

Olive leaf extracts and their oleuropein constituents are best known for their blood pressure-lowering effects, but the latest studies reveal their health benefits extend well beyond that. Additional anti-inflammatory and antioxidant properties offer promise in fighting atherosclerosis, diabetes, cancer, neurodegenerative diseases, and even arthritis.

Animal studies demonstrate that olive leaf extracts lead to significant drops in elevated blood pressure.6,7 Remarkably, these effects are evident when supplementation occurs either before or after the animals develop hypertension. This means that the extracts have the ability to both prevent and treat high blood pressure.8

The drop in blood pressure is accompanied by reduced pressure in the heart’s left ventricle. This results in improved blood flow to the heart’s own coronary blood vessels. Additional human studies demonstrate the ability of olive leaf extracts to significantly reduce blood pressure measurements.9

One particularly fascinating study was conducted among identical twins with borderline hypertension (blood pressure in the range of 120-139 mmHg over 80-89 mmHg).10 Studies of identical twins virtually eliminate genetic variations which may impact study results. After 8 weeks, placebo recipients showed no change in blood pressure from baseline, but patients supplemented with 1,000 mg/day of olive leaf extract dropped their pressures by a mean of 11 mmHg systolic and 4 mmHg diastolic.10 The supplemented patients experienced significant reductions in LDL cholesterol.

A human study measured olive leaf extract against captopril, one of the conventional drugs used for treating hypertension.11 In this study, patients with stage-1 hypertension (140-159 mmHg over 90-99 mmHg) took either 500 mg of olive leaf extract twice daily, or 12.5 mg of captopril twice daily, which was increased as needed to 25 mg twice daily. After 8 weeks of treatment, both groups experienced a drop in mean blood pressure from baseline (11.5 and 13.7 mmHg systolic; 4.8 and 6.4 mmHg diastolic, respectively), with no significant difference between the two groups. In other words, the olive leaf extract performed as well as the prescription drug. A closer look in the laboratory reveals the reason for this equivalence. Although they utilize different mechanisms of action (oleuropein acts as a natural calcium channel blocker and captopril is a well-known ACE-inhibitor), both oleuropein and captopril function inside the vasculature to decrease the tension in the walls of blood vessels and promote widening of the vessels (vasodilation), ultimately lowering blood pressure.12-15

The proven blood pressure-lowering effects of olive leaf extracts are potent enough to warrant caution if you are taking prescription blood pressure drugs.60 If you are on blood pressure medication, it’s essential that you speak to your prescriber before starting supplementation.

Blood pressure is only one measure of cardiovascular health; arterial health is equally important. The endothelial cells that line arterial walls play a key role in maintaining blood flow and pressure; they also regulate the distribution of smooth muscle cells and sustain an even flow of blood through vessels. Endothelial dysfunction is one of the earliest stages in hardening of the arteries (atherosclerosis), which occurs when plaques build up in the arterial walls. These plaques eventually block blood flow and can trigger a heart attack or stroke.

Olive leaf extracts fight endothelial dysfunction at multiple levels. They increase the production of nitric oxide, a signaling molecule that helps relax blood vessels.16,17 They reduce the production and activity of a class of molecules known as matrix metalloproteinases, or MMPs.18–20 Excessive MMP activity literally dissolves the gel-like matrix that holds cells together, making vessel linings increasingly vulnerable to plaque damage. They also help prevent the oxidation of LDL-cholesterol, which is one of the earliest events in developing atherosclerosis.21–23 Oxidized LDL triggers inflammation, further damaging arteries, and olive leaf extract has multi-targeted anti-inflammatory effects.20,24,25

Polyphenol compounds found in olive leaves have been shown to help directly prevent the formation of arterial plaques (and thereby reduce the risk of heart attack and stroke) in two ways. First, they reduce the production and activity of a series of “adhesion molecules.”26–28 These substances cause white blood cells and platelets to stick to arterial walls, resulting in early plaque formation. Second, they reduce platelet aggregation (clumping) by multiple mechanisms, which reduces the risk that tiny clots will form at sites of plaque to produce a stroke or heart attack.29,30

Olive leaf extracts are showing real promise in both of these areas. In animal and basic lab studies, olive leaf extracts and oleuropein have been found to lower blood sugar through several mechanisms.31–34 They slow the digestion of starches into simple sugars, slow absorption of those sugars from the intestine, and increase the uptake of glucose into tissues from the blood.31,32 They protect tissues from the oxidant damage caused when glucose binds to proteins in the process called glycation.33,34 They also increase levels of other natural antioxidant systems in the body, broadening the degree of protection.33

These mechanisms have directly observable benefits. Studies show that diabetic animals supplemented with olive leaf extracts experience significant reductions in blood sugar and cholesterol.33,35 In a dramatic head-to-head study, diabetic rats were treated with either olive leaf extract or glyburide (Diabeta®), a common glucose-lowering drug.35 By the end of the study, the antidiabetic effects of the extract proved superior to those of the drug.35

One intriguing study showed that when lab rats were fed a high-fat, high-carbohydrate diet, they developed all the signs of metabolic syndrome (excessive abdominal fat, hypertension, abnormal lipid profile, and impaired glucose tolerance).36 But when animals were fed that unhealthy diet along with olive leaf extracts, virtually all of the metabolic abnormalities improved or, in some cases, normalized.36

The Mediterranean diet is renowned for its ability to reduce the risk of cancer.38,39 While numerous aspects of the diet contribute to this risk reduction, there’s growing evidence that olive oil—and specifically its oleuropein content—are key components of the diet’s anti-cancer effects.

Studies show that oleuropein’s antioxidant effects help it battle cancer formation at its earliest stages. Olive leaf extracts inhibit DNA damage from reactive oxygen species, which is the very first step in development of malignant cells.40 Once cells become cancerous, they rely on a host of chemical signaling factors that promote their growth and organization into tumors. Olive leaf compounds are known to inhibit growth factors and disrupt signalling pathways.41–43 Oleuropein also suppresses an enzyme cancer cells rely on to derive and store energy from dietary carbohydrates.44

Oleuropein and olive leaf extracts have numerous other mechanisms of action against cancer:

These mechanisms have now been shown in laboratory and animal studies to reduce the rates of occurrence, and subsequent development, of a broad variety of cancers, including those of the brain, head and neck, breast, liver, bladder, prostate, and skin, as well as leukemia.42,43,45–49

In one especially vivid study, mice with a high spontaneous cancer rate were orally supplemented with oleuropein.5

The tumors completely regressed and disappeared in 9 to 12 days! When the tumors were examined before they vanished, they were found to have a disordered, crumbly consistency, and no cancer cells remained alive within.

Olive extracts help protect the brain and central nervous system from the destruction brought on by strokes and age-related degenerative conditions such as Alzheimer’s and Parkinson’s diseases.50 They accomplish this by suppressing inflammation and reducing the damage done by oxidative stress.

In acute brain injuries such as those caused by a stroke or trauma, damaging processes such as oxidative stress occur within minutes of the original event—and, ironically, are worsened by the return of normal blood flow to the area.50,51

Researchers found a number of positive effects in animals that were pre-treated with olive leaf extract and then induced with a stroke. Compared with untreated animals, the treated animals experienced a sharp reduction in markers of oxidation and an increase in normal cellular antioxidant systems.52,53 Microscopic examination of brain tissue revealed a similar decline in injury to brain cells and up to a 55% decrease in the volume of dying brain tissue.50 Similar results are shown in experimental spinal cord injury in animals pretreated with oleuropein.53

Olive leaf extracts offer similar protection for neurodegenerative diseases. Oxidative stress occurs more gradually in neurodegenerative diseases. However, the effects add up over a lifetime, producing inflammation and other changes that result in the accumulation of abnormal proteins that interfere with brain function and kill neurons. Olive leaf extracts help prevent these abnormal proteins from assembling into the neurofibrillary tangles seen in the brains of people with Alzheimer’s and similar diseases.54–56

Olive leaves and their extracts have long been used in the Mediterranean as folk remedies for arthritis. Now, scientific evidence has proven that olive leaf extracts can in fact interfere with the development of several different kinds of arthritis, including gout, rheumatoid arthritis, and osteoarthritis.

Gout is caused by the accumulation of uric acid crystals in joints, the byproducts of impaired recycling of DNA and RNA in cells. In a mechanism identical to that of allopurinol (the gold standard drug therapy for gout), oleuropein prevents the buildup of uric acid by inhibiting xanthine oxidase, the enzyme responsible for converting DNA and RNA into uric acid.57

Oleuropein has also been found to help prevent and treat symptoms of rheumatoid arthritis. When administered at the earliest sign of arthritis in animal models, oleuropein prevented symptoms from developing and also produced marked improvement in the microscopic appearance of joint tissue from affected animals. When administered after arthritis was fully developed, there was significant improvement in inflammatory changes to joints, compared with untreated animals.58

The Mediterranean diet reduces your risk for virtually every condition associated with aging. Olive oil is a major component of that diet. Olive leaves contain higher amounts of oleuropein, a polyphenol with unique health-improving attributes. These extracts have been used in traditional medicine for centuries to improve age-related diseases.

Now, scientific evidence has shown that these extracts have a remarkable impact on blood pressure and heart disease—and they can help protect against other age-related chronic conditions as well. Convincing evidence now shows that oleuropein-rich olive leaf extracts help prevent many of the underlying factors leading to diabetes, cancer, neurodegenerative diseases, stroke, and arthritis.

Extra-virgin olive oil and olive leaf extract should be considered an important component of one’s health and longevity program.

Advertisement. Scroll to continue reading.
In this article:olive leaf extracts