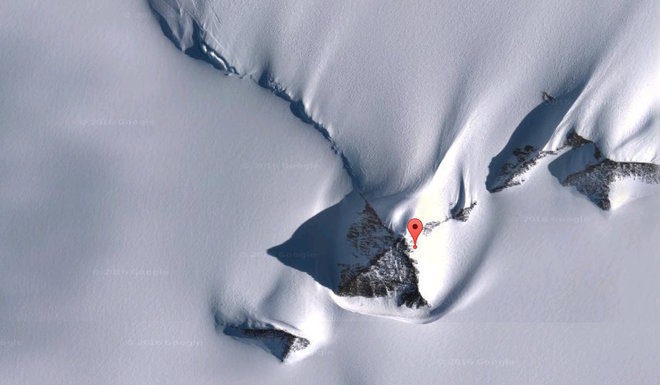 Ancient alien theorists who are certain secret pyramids are concealed all around the globe, think some may be hidden on Antarctica. Conspiracy theorists, in particular, point to a vaguely pyramid-like structure near the Shackleton mountain range on the icy continent. The “pyramid” in question, when viewed on satellite imagery, does appear to have four steep sides much like the Great Pyramid of Giza. This incredibly bizarre theory was presented on the History Channel’s TV series Ancient Aliens, which investigates various extraterrestrial theories.Episode one of season 11 of Ancient Aliens, explored the remote possibility such pyramids were left behind by ancient alien visitors or human civilisations.

Conspiracy theory author David Childress told Ancient Aliens there is a distinct possibility the Shackleton pyramid is the oldest of its kind on Earth.

He said: “If this gigantic pyramid in Antarctica is an artificial structure, it would probably be the oldest pyramid on the planet and in fact it might be the master pyramid that all the other pyramids on planet Earth were designed to look like.” Another conspiracy theorist agreed, saying: “All the way around the world we find evidence of pyramid structures.”We should start looking at the possibility there was habitation on Antarctica.”Was it a lost civilisation? Could it be ancient astronauts?”And just maybe, the earliest monuments of our own civilisation came from Antarctica.”But the theory was challenged by Dr Michael Salla, author of Exopolitics Political Implications of the Extraterrestrial Presence.

The alien expert argued the Antarctic pyramid is just one node in a global network of power-generating pyramids strategically placed around Earth.

A popular pyramid conspiracy claims the triangular structures act as power generators of sorts, built for the purpose of transiting vast amounts of energy wirelessly.

It would probably be the oldest pyramid on the planet

Dr Salla said: “There has been extensive research done on pyramids throughout the world, in terms of their structure an what is they really are.

“One of the theories is that pyramids are power generators and so, if you have these pyramids strategically placed around the world generating a charge, it’s possible to create a general standing wave around the world that is a wireless transmission of energy.”

However, not everyone who saw the Ancient Aliens episode was convinced by the wild theories presented.

And Mohammad Ziaul Mushtafa Khan said: “No evidence, only a bunch of authors referred them as extraterrestrial theorists claimed everything on Earth is conspired by some aliens, now latest victim is Antarctica.

And according to geologists, there is nothing unusual about the angular shape of the mountain.

Dr Mitch Darcy, a geologist at the German Research Centre for Geosciences in Potsdam, argued mountains like this are known as nunataks.

Nunataks are exposed and rocky mountain peaks and rides which are naturally occurring and pyramid-like in shape.

Speaking about a similar “Antarctica pyramid” near the Ellsworth Mountains, the geologist told IFLScience: “The peaks are clearly composed of rock, and it’s a coincidence that this particular peak has that shape.

“It’s not a complicated shape, so it’s not a special coincidence either.

“By definition, it is a nunatak, which is simply a peak of rock sticking out above a glacier or an ice sheet.

“This one has the shape of a pyramid, but that doesn’t make it a human construction.”

In this article:Ancient Astronauts, featured, pyramid in Antarctica