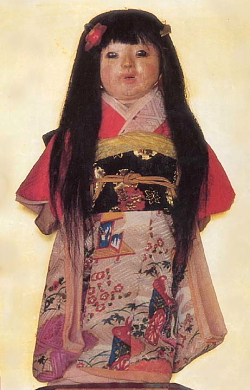 The haunted japanese doll Okiku, possessed by the spirit of a 10 year old girl who took refuge inside it. Some time after the funeral of the girl, the hair of the doll began to grow. Although the doll’s hair is cut regularly, the hair grows again and again. A mysterious doll possessed by the spirit of a child has captured the curiosity of people across Japan for decades. The legendary Okiku doll, named after the girl who long ago used to play with it, is a 40-centimeter (16-in) tall kimono-clad figure with beady black eyes — and hair that grows.
The Okiku doll has resided at the Mannenji temple in the town of Iwamizawa (Hokkaido prefecture) since 1938. According to the temple, the traditional doll initially had short cropped hair, but over time it has grown to about 25 centimeters (10 in) long, down to the doll’s knees. Although the hair is periodically trimmed, it reportedly keeps growing back.
It is said that the doll was originally purchased in 1918 by a 17-year-old boy named Eikichi Suzuki while visiting Sapporo for a marine exhibition. He bought the doll on Tanuki-koji — Sapporo’s famous shopping street — as a souvenir for his 2-year-old sister, Okiku. The young girl loved the doll and played with it every day, but the following year, she died suddenly of a cold. The family placed the doll in the household altar and prayed to it every day in memory of Okiku.
Some time later, they noticed the hair had started to grow. This was seen as a sign that the girl’s restless spirit had taken refuge in the doll.
This doll was originally purchased in 1918 by a Eikichi Suzuki in Sapporo, where he saw a beautiful Japanese doll with a Kimono. Eikichi bought this doll for her sister, who is two years old named Okiku. She loved this doll and play it every day. But unfortunately, Okiku died shortly afterwards of a fever. Then at his funeral, family want to put a doll into his coffin, but somehow they forgot. The girl’s family then put the doll on the household altar and pray for every day in order to commemorate Okiku. Some time later, they saw the hair began grows. According to this story is the spirit of the girl who took refuge inside the doll.
In 1938 the family moved to shakalin Suzuki, doll okiku Mannenji finally deposited in a temple in Hokkaido. According to the priest at the temple, a traditional Japanese doll is always short-haired, he also confirmed that the doll’s hair continues to elongate okiku, although the cut and hold a regular basis, but the hair grows. According to the temple, traditional dolls originally had short cropped hair, but over time continue to grow about 25 centimeters long, down to the knees. Although the doll’s hair is cut regularly, but according to a story the hair grows again. 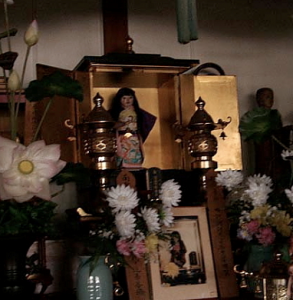 While the Okiku within the doll legend was purportedly given the doll in the early 1900’s and died of a cold, the name Okiku is seen in Japanese ghost tales going much farther back in time. Perhaps it is just a coincidence, or perhaps it is just a woven tale using the famous name from past tales to gain more attention? The ghost story of Okiku, an unfortunate servant maid, is one of the best known and was transformed into a Kabuki play and numerous novels.
Bancho Sarayashiki
In the kabuki play Bancho Sarayashiki, Okiku is a maid at the mansion of the Japanese samurai Tessan Aoyama. The samurai wants to seduce the cute girl but she rejects his advances. Aoyama uses a trick. He hides one of ten valuable Dutch plates and threatens Okiku to make public that she had stolen the plate unless she agrees to become his mistress. In her desperation Okiku throws herself into the well and drowns. Okiku’s ghost comes out every night, counting from one to nine and then breaks out into a terrible howling and sobbing. Finally Aoyama goes insane by the daily apparitions at night. 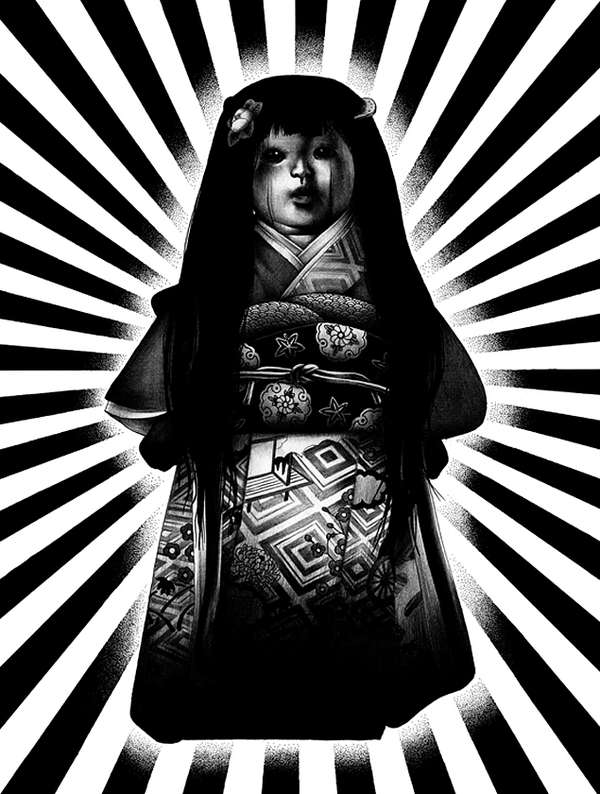 The Himeji Castle Version
One of the tourist attractions on Himeji Castle is Okiku’s well. In the Himeji version, Okiku was a servant of Aoyama, a retainer who planned a plot against his lord. Okiku overheard the plot and reported it to her lover, a loyal warrior. The plot was averted. When Aoyama found out that Okiku had been the cause for his failure, he decided to kill her. So he accused her of having stolen one of ten valuable dishes. She was tortured to death and thrown into the well. Okiku’s well on Himeji Castle is in competition with another location of the well, the garden of the Canadian embassy in Tokyo – established on land bought from the Aoyama family. Looks like there are at least as many locations of the well of the poor girl as there are different versions of her story. All the variations of the ghost story of Okiku have an extremely wrongful and cruel treatment of a poor girl of the lower classes in common. But different from the ghost story of Yotsuya, revenge towards the tormenter is not the big Leitmotiv (apart from one variation of the story).
Shinkei Sanju-roku Kai Sen – 36 New Ghosts
Among the ukiyo-e artists designing ghost subjects, Yoshitoshi Tsukioka (1839-1892) should be mentioned in first place. Yoshitoshi strongly believed in the existence of ghosts and was convinced that he had personally seen supernatural apparitions in his life. The print of The Ghost of Okiku at the Dish Mansion was part of the series Shinkei Sanju-roku Kai Sen. It was Yoshitoshi’s last series before his death (together with one One Hundred Aspects of the Moon) and was published from 1889 to 1892. The series can be found under different English translations like New Selection of 36 Apparitions or Thirty-six New Ghosts. Towards the end of his life, the subjects of Yoshitoshi’s prints were predominantly chosen from Japan’s rich cultural tradition and history. It was an appeal of the artist to his countrymen not to give up their traditional values in exchange for the Western modernization that had begun in the Meiji period.
According to people who never saw this doll, this doll is creepy with all the nuances of non-logical. How can inanimate objects can grow hair continuously. Almost like Jenglot, this doll is really beyond reason. A Japanese researcher revealed that the results of forensic tests which were grown doll’s hair is exactly the same hair at the age of 10 years.
Okiku name is taken from a child who was playing with dolls with a size of 40 centimeters tall, dressed in a kimono with black eyes like beads and bushy hair. Okiku doll has been in the temple town of Iwamizawa Mannenji in Hokkaido Prefecture) since 1938.This doll was originally purchased in 1918 by a young man named Eikichi Suzuki in Sapporo, where he saw a beautiful Japanese doll with a kimono. Eikichi purchased this doll for 2 year-old sister named Okiku, this child loved this doll and play it every day.
But unfortunately, Okiku died shortly after that because of fever. Then at his funeral, family would like to include the doll into his coffin but somehow they forgot. The girl’s family then put the doll on the household altar and pray for each day in order to commemorate Okiku. Some time later, they see the hair starting tumbuh.Menurut this story is the spirit of the girl who took refuge inside the doll.
This story has inspired a variety of Japanese horror movies popular one is the movie entitled “Haunted School.”