Last week I dug up an old observation log from March 2012 with this entry:

The object was dark, just a bit lighter than the sky. It was long and thin, something like this:

[And I drew, basically, a boomerang. ]

It moved rapidly through the sky. It wasn’t fixed, like the wing of an airplane, but moved slightly, like something organic. Though it seemed solid, its edges were blurred, like smoke.

It moved so quickly, it was gone within three seconds. It appeared in the south, just east of Saturn, and flew almost directly north.

It was, literally, an unidentified flying object. I don’t know what it was, except a thrilling sight.

I dug up my old log after learning recently, from a story in our sister paper, the Greensboro News & Record, that North Carolina is a hotbed of UFO activity. Our state just misses being on the list of top 10 states for such sightings, according to the National UFO Reporting Center in Davenport, Wash. There have been 2,822 documented UFO sightings in North Carolina since the 1940s, the organization says, and some of them come from Greensboro and Winston-Salem.

A sampling of descriptions includes sparkling lights, disks, rectangles and cigars, hovering, spinning and circling. They all defy identification, but Peter Davenport, director of the reporting center, is quoted as saying, “Mankind is just beginning to awaken to the fact that we appear to have guests, and they appear to be here on a frequent basis.” Many others have reached similar conclusions.

Last December, the U.S. Department of Defense released long-classified reports from a program that studied UFOs, including a dramatic video taken by a Navy pilot that will make your hair curl – he followed an oblong-shaped object that moved erratically before veering away at rapid speed. The pilot concluded he’d witnessed “something not from the Earth.”

The reports warrant further examination, for their national security implications alone. But concluding extraterrestrial visitation seems to me to be a step too far. As former Sen. Harry Reid, who worked with the DOD on its program, said, “If anyone says they have the answers now, they’re fooling themselves. We do not know.”

I’ve actually seen other mysterious objects, as has my friend and fellow astronomy buff, Ken Mohan:

Around 12:30 p.m. on August 23, 1993, my ex and I observed a large, silver, seemingly round object gleaming in the sunlight and traveling northbound and close to the ground parallel to Highway 19/23 near Asheville. As we drove, it appeared to flatten out into a disc shape, as if we had been viewing it from the top or bottom initially. It maintained its roughly parallel course in relation to the highway for a minute or more before rapidly shrinking as it moved off to the east. Trees eventually blocked our view.

Last week, I spoke to Dave Morgan, the president of the Forsyth Astronomical Society, who spends a lot of time looking at the sky. “I’ve been watching meteor showers seriously since about 1972,” he told me, “and am familiar with atmospheric turbulence, sun dogs, ice crystal haloes, ball lightning, sprites, bows and other visual phenomenon.”

Morgan shared with me a story about watching an object low on the horizon “changing color rapidly, changing position in the sky. … There were three or four of us there, all experienced observers, going, ‘what the —- is that? A plane can’t move like that.’ It wasn’t until it rose high enough that it was identifiable as [the planet] Venus.”

“My general position,” he added, “is I’m very skeptical, but I’m open-minded. That being said, I’ve never seen any convincing evidence for extraterrestrial UFOs that hasn’t been refuted.”

The night sky is not static. Along with the stars and planets, observers like Dave, Ken and I regularly sight the International Space Station and artificial satellites, as well as occasional meteor showers. And sometimes we see things that make us say, “What the —- is that?”

But while I grew up on the science fiction of Gene Roddenberry and Edgar Rice Burroughs and would be thrilled to discover life from other worlds, I can’t honestly conclude that’s what I’ve witnessed. Given the distance of 4.22 light-years to the closest star, Proxima Centauri, and the cosmic speed limit, 186,282 miles per second (the speed of light), it seems very, very, very, very, very unlikely that life from another solar system could ever reach us. It’s more likely that the nation of Wakanda is real.

Sometimes, the most honest and accurate thing to say is “I don’t know.”

We people are not very good at that. We want answers.

But not knowing can be part of the fun.

In this article:mysterious objects, UFOs 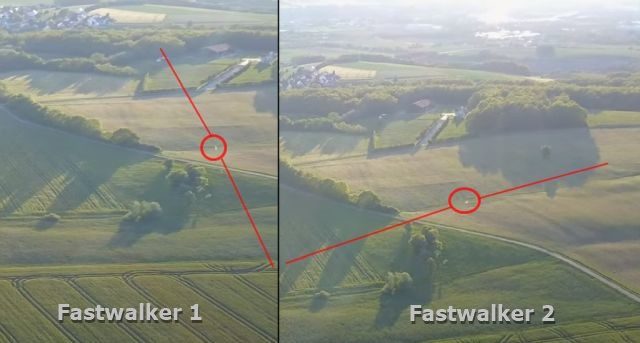 Two UFO Fastwalkers Recorded Passing Each Other at the Same Point over Bavaria, Germany

Drone cameras have been capturing mysterious Fastwalkers which move too fast for the human eye to pick up and are barely perceptable at regular...