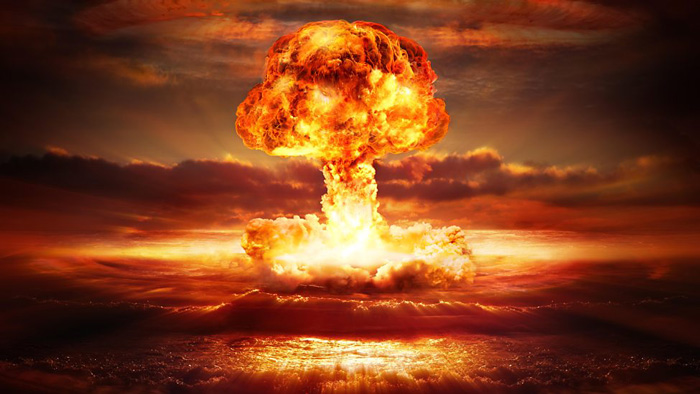 Nuclear war already occurred on Earth in remote times, and these Sanskrit epics and desert minerals are here to prove it.

While presenting a lecture at Rochester University, Dr. Robert Oppenheimer, known as “the father of the atomic bomb,” was asked during the Q&A session by one of the students if the bomb which exploded at Alamogordo during the Manhattan Project was the first one to be detonated. Oppenheimer’s reply was: “Well, yes! In modern times of course.”

His belief that nuclear tests were performed previous to the first detonations in modern times stemmed from Hindu texts describing ravaging events which occurred in remote ages.

Although Oppenheimer never referred to himself as a Hindu, nor abode to Hinduism, he gave much praise to their sacred texts, particularly to the Ramayana and Mahabharata.

He claimed that “access to the Vedas is the greatest privilege this century may claim over all previous centuries,” and often gave as a gift to his friends the Bhagavad Gita, the 6th book of the Mahabharata.

He quoted a very powerful verse from the Hindu scripture right after he saw the yellowish-orange mushroom cloud rise from the detonation of the atomic bomb at the Trinity site in Los Alamos, New Mexico:

Now, I am become Death, the destroyer of worlds.”

This line made much sense to him, as he understood that previous civilizations had also achieved the splitting of the atom in an effort to bring weapons of mass destruction to life.

The Hindu Vedas stand testimony to such achievements, and depict how atomic weapons were blown off in remote times causing tremendous havoc and destruction.

Gurkha, flying a swift and powerful vimana hurtled a single projectile charged with the power of the Universe. An incandescent column of smoke and flame, as bright as ten thousand suns, rose with all its splendor. It was an unknown weapon, an iron thunderbolt, a gigantic messenger of death, which reduced to ashes the entire race of the Vrishnis and the Andhakas. The corpses were so burned as to be unrecognizable. Hair and nails fell out; Pottery broke without apparent cause, and the birds turned white…After a few hours all foodstuffs were infected…to escape from this fire the soldiers threw themselves in streams to wash themselves and their equipment.”

The events described are said to originate some 24,000 years ago, although the text itself is dated to 7,300 BC. Their date of origin is however subject to great debate, since no organic material was found at the sites where the Ramayana and Mahabharata texts were uncovered.

But dating the texts is not as relevant as the correlation with modern-day events, as well as the evidence attesting their controversial content that can be traced to various sites across the globe.

To start with, let’s have a look at these curious glass fragments scattered throughout various deserts on our planet. They were first brought into discussion by Patrick Clayton in 1932, long before the modern-day nuke was invented.

Sand turns into glass at temperatures of 1,800 degrees Celsius (3,300 Fahrenheit), and because of this researchers have attributed the dead to a meteorite of comet fragment that had collided with the surface. This however was easily disproved for the following reasons:

A meteorite impact would surely leave behind a sizeable crater, and although some have argued that the shifting sands would have swallow any impact traces, tests performed on the pieces of glass revealed its composition was 99 percent pure. Then, if the glass occurred as a result of a meteorite, it would have fused with iron particles, silicon and other impurities.

Decades after Clayton’s controversial discovery, researchers visiting the atomic testing grounds in New Mexico have remarked an astounding similarity between the desert glass and the glass that formed inside the impact crater. With this new hypothesis on the table, scientists have estimated that a nuclear blast 10,000 more powerful would have been needed to produce the amount of glass found in the desert.

This is exactly what the Ramayana describes:

It was a weapon so powerful that it could destroy the earth in an instant. A great soaring sound in smoke and flames, and on it sits death…”

It’s unknown how many locations on Earth were affected, but there seems to have been quite a few engulfed by these ancient weapons of mass destruction.

Dense arrows of lame, like a great shower, issued forth upon creation, encompassing the enemy. A thick gloom swiftly settled upon the Pandava hosts. All points of the compass were lost in darkness. Fierce wind began to blow upward, showering dust and gravel.

Birds croaked madly…the very elements seemed disturbed. The earth shook, scorched by the terrible violent heat of this weapon. Elephants burst into flame and ran to and from the frenzy over a vast area, other animals crumpled to the ground and died. From all points of the compass the arrows of flame rained continuously and fiercely.”

Another puzzling item is the yellowish scarab-shaped gem embedded on one of Tutankhamun’s necklaces displayed at the Egyptian Museum in Cairo.

After Italian mineralogist Vicenzo de Michele had performed tests on the jewel, he realized it was made of glass, but it was far older than the earliest Egyptian civilization.

The only way for this desert glass to have formed was due to a meteorite impact, but no convenient crater has been detected that would have explained the pieces of glass in the Egyptian desert, not even scouting via satellite.

The only lead they could come up with was the 1908 Tunguska explosion in Syberia which flattened over 80 million trees, leaving no traces of an impact crater. A correlation was indeed established between these two enigmas, but were both lacking a plausible explanation.

Two ancient civilizations in the Indus Valley located on territories of modern day Pakistan an India have intrigued archaeologists ever since their discovery.

Although highly advanced and democratic societies, with irrigation and drainage systems, multi-leveled  houses, communal and even individual baths, these two cities of Mohenjo Daro and Harappa have been deserted simultaneously for no apparent reason.

This civilization spanned across 500 acres (200 hectares), and housed a population anywhere between 20,000 to 40,000 inhabitants. Coincidentally or not, their mysterious demise happened at the same time the Great Pyramid of Giza was allegedly built, around 2,500 B.C.

What brought these two cities in the ancient nuclear war equation were the skeletal remains discovered holding hands, sign of a sudden death caused by a violent cataclysm. Accounts also speak of a layer of radioactive ash that was discovered in the soil during the excavation of the sites, but these claims are somehow subject to debate due to lack of additional evidence.

Because the two cities were leveled to the ground at the same time, although there was a considerable distance between them, but were part of the same culture, further hints at events described in the Mahabharata, particularly in the 7th book entitled Drona Parva after the leader of a great army participating in the Kurukshetra War.

We beheld in the sky what appeared to us to be a scarlet cloud resembling the fierce flames of a blazing fire. From that mass many blazing missiles flashed, and tremendous roars, like the noise of a thousands drums beaten at once. And from it fell many weapons  winged with gold and thousands of thunderbolts, with loud explosions, and many hundreds of fiery wheels.”

We can only speculate if the Vedas text describes an atomic bomb explosion, or a different weapon of mass destruction the ancients possessed. But, the not-so-few accounts and abnormal objects encountered in the desert speak in favor of a past that we have barely discovered and even less have understood.

Were there really flying vessels similar to our own back then? Were these “gods” described in the Hindu scriptures mortal men that have reached a higher level of technological evolution? Or rather o group of extraterrestrial beings that have descended upon the Earth in archaic times?