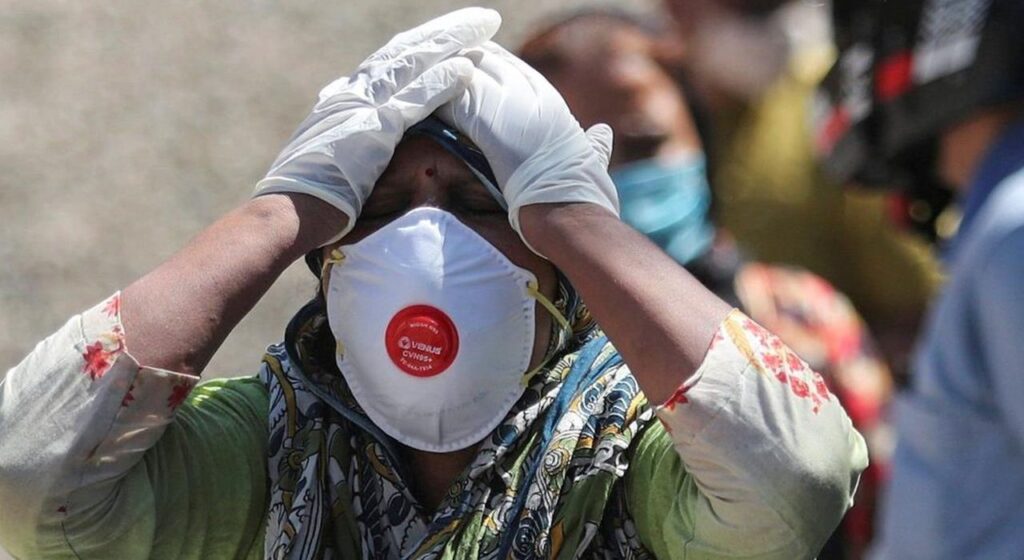 In addition to the “black”, “white” and “yellow mold” – fungal diseases identified in India in patients who have undergone coronavirus, local doctors have now also discovered “green mold”, or aspergillosis of the lungs. According to the Hindustan Times, citing officials, this may be the first case of an outbreak of a dangerous disease in the country.

On June 17, the Indian Times, citing government information, reported that the country may have registered the first case of infection with so-called aspergillosis, better known as “green mold.”

The victim was a 34-year-old man from Madhya Pradesh state in Indore who was previously treated for coronavirus. A patient with COVID-19 had 90% lung damage, and during the diagnosis, doctors found a “green fungus” in his sinuses, lungs and blood. Apoorva Tiwari, a health specialist in Indore, told ANI that this is the first case in the country.

“The patient has recovered from the coronavirus. But then he started having nosebleeds and a high fever. He also became very weak due to weight loss, ”says a doctor from the Sri Aurobindo Institute of Medical Sciences (SAIMS).

Aspergillosis is caused by indoor and outdoor Aspergillus molds. In total, there are about 180 species of such a fungus, and only 40 of these forms can infect humans. Aspergillosis is a potentially fatal disease that can lead to infectious pneumonia, but for people with healthy immune systems, it is considered harmless and controlled by maintaining good hygiene of the mucous membranes.

Green mold is not the first fungal infection that India has faced in recent times. The outbreak of mucormycosis, also called “black mold”, has seriously aggravated the workload of local health care.

Mucormycosis, unlike aspergillosis, is not a new problem in India. Before the sharp rise in the incidence, doctors found “black mold” in about one person a week, but now the number of cases of fungal infection has increased by 150%.

This fungus lives in the environment and is found in soil, rot, air. “Black mold” spreads through the respiratory tract and enters the body after inhalation of spores. The first symptoms are blackening of the facial skin, shortness of breath and coughing up blood, blurred eyes, and chest pain. One of the patients in India, who had previously suffered a coronavirus, completely lost his sight with significant damage to the facial tissues. There are options when doctors have to purposefully remove the patient’s eye in order to prevent the fungus from entering the brain.

Often, the consequences of infection are fatal. According to statistics from the Indian authorities on June 11, 31,216 people fell ill with mucormycosis, 2,109 patients died. This is despite the fact that previously no more than 20 cases of mucormycosis infection were recorded annually in the country.

Black mold is not limited to India. The first cases have already been reported by Oman – in the sultanate, three patients with this infection were identified, the first known in the Arabian Peninsula.

There are other types of postcoid fungus that have already been found in India. The most dangerous form is considered to be “yellow mold” of a fungus of the mucorous family. With it, the patient initially encounters minor symptoms in the form of a headache or a runny nose, but later suppuration occurs, leading to tissue necrosis, edema, fever, bloody vomiting, multiple organ failure and mental disorders.

Often, patients have their noses, eyes, or parts of the jaw removed due to devastating symptoms. There are only a few cases of infection with “yellow mold”, since until recently it was found only in reptiles. In India, such a fungus was found in one person, he later died.

Another type of infectious fungus is white mold. Like “yellow”, it is more dangerous than “black”, is extremely rare and is accompanied by the same symptoms as previous infections. It affects the lungs, skin, nails, stomach, kidneys, brain and mouth, and the “white” fungus is called because of the ulcers of this color, which appear in the infected person’s mouth and cause difficulty in swallowing.

There are cases when postcoid patients simultaneously developed several types of fungal infections at once.

Why do people with COVID get sick?

Scientists associate the outbreak of fungal infections with an unfavorable epidemiological background due to the new wave of the coronavirus pandemic. People with weakened immune systems, who, in particular, are on oxygen support, such as patients with COVID-19, as well as patients with diabetes, cancer and organ transplants, are mainly susceptible to these post-coccygeal diseases.

Experts point out that it is the overuse of coronavirus drugs that suppress immunity that is causing the surge in fungal infections. The connection with diabetes is due to the fact that people with diabetes use high amounts of steroids, which adversely affect the immune system.

“Black mold”, for example, can live in the human body without a threat to health, but is controlled by the immune system. Accordingly, if it is damaged, the infection begins to progress rapidly.

As for why the surge of infectious fungal diseases occurred in India, some experts attribute this to a lack of personal hygiene and unsanitary conditions in hospitals specializing in receiving patients with COVID-19. Nishant Kumar, an ophthalmologist from a hospital in Mumbai, notes that the tubes of ventilators are sometimes non-sterile, and with prolonged presence on the system, the risk of fungus entering the human body increases.

At the same time, a researcher at the Mahatma Gandhi Institute of Medical Sciences in Maharashtra points out that hospitals in India were previously dirty, and now it is not possible to understand the true cause of the outbreak of bacterial infections.

“The current infection rate is scary,” he told Al Jazeera.

SARS-CoV-2 virus can enter the testicles of infected hamsters. This is the conclusion reached by researchers from the University of Texas. The presence of virus particles in mammalian genitals may explain some of the symptoms that COVID-19 causes in men.

The authors of the new study, published in the scientific journal Microorganisms, note that the risk of death and severe course of COVID-19 in men is generally higher than in women.

There is also a lot of evidence that COVID-19 affects male reproductive health: men go to doctors with complaints of pain in the testicular area, patients have a decrease in the level of sex hormones, and spermatogenesis (sperm production) is disrupted.

The researchers decided to find out exactly how the virus affects the male genitals. Asian hamsters were used as animal models in the study, as their symptoms of COVID-19 are very similar to those of humans.

During the first week after infection, SARS-CoV-2 was found in the testicals of all animals, but its number soon decreased. Researchers suggest that the same picture can be observed in the body of men with mild to moderate COVID-19.

“These results are the first step towards understanding how COVID-19 affects the male reproductive tract and potentially male reproductive health. We still have a lot of work to do to get a more complete picture. in particular with the help of antiviral drugs, antibody therapy and vaccinations,” co-author Dr. Shannan L. Rossi of the University of Texas Medical Branch, said.

Currently, there is little information about the reproductive health consequences of vaccination, and for many scientists and citizens, the situation is as follows: the lesser of two evils principle is adopted.

Advertisement. Scroll to continue reading.
In this article:COVID-19, green fungus