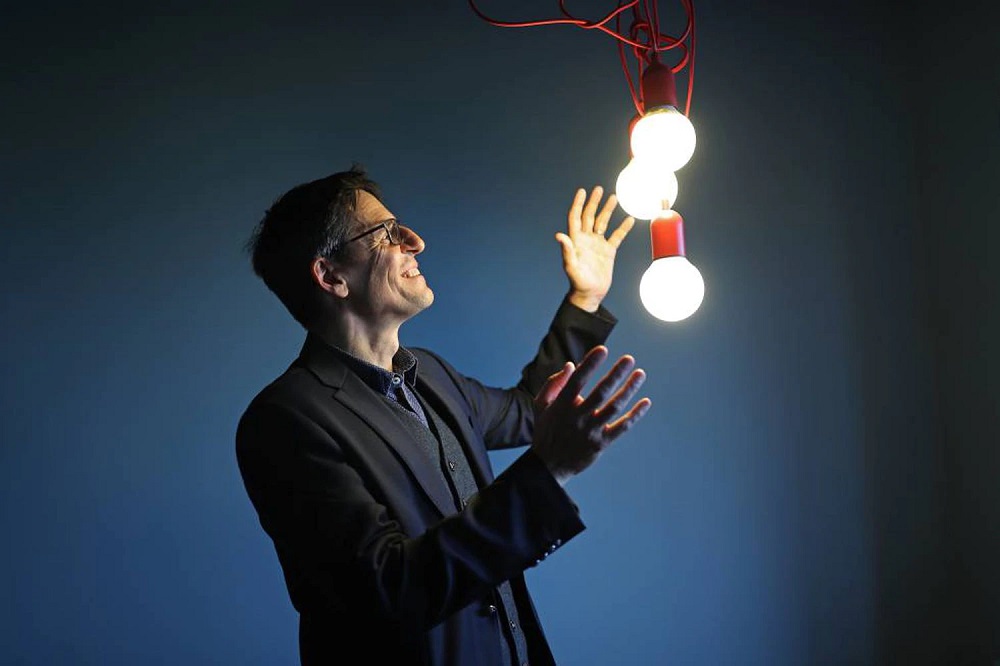 Didier Queloz directs the scientific operations of a space telescope that will observe hundreds of extrasolar planets in our cosmic neighborhood.

In 2012 mankind first captured light reflected from a terrestrial planet outside our Solar System. It was called 55 Cancri-e and was 40 light years away. A robotic probe would take 180,000 years to get there. Planet 55 Cancri-e is so close to its sun that a year there lasts only 18 hours. The radiation is so intense that the rock is completely molten, forming a massive ocean of lava at 1,700 degrees Celsius. Observations indicate that this world is a super earth with several times the mass of our planet, but less than that of gaseous worlds like Neptune. Interestingly enough, judging from the list of 4,100 exoplanets discovered to date, these super Earths are much more common than planets like ours. We are rare.

55 Cancri-e will be one of the first planets to have its radius measured in unprecedented detail by the European space telescope Cheops, which has just entered orbit. This measurement may clarify for the first time if it is a truly rocky planet or if it is gaseous.

Didier Queloz (Geneva, 1966), astrophysicist, scientific director of the European mission and winner of the 2019 Nobel Prize in Physics, together with his mentor Michel Mayor, discovered that they discovered the first exoplanet orbiting a star other than the Sun in 1995. It is a gas giant resembling Jupiter, but with very high temperatures due to its proximity to its star. At first it also seemed a rarity almost impossible to believe, but now we know that these worlds are very abundant around the Solar System.

All of these discoveries, says Queloz, are essential in order to begin to understand our true place within the universe and to know what is needed for life to arise in the exoplanets. Hours before successful rocket takeoff Soyoy who put the Cheops telescope into orbit, Queloz explains the long road of astronomical exploration ahead before we find inhabited worlds. This, he warns, as long as our civilization does not destroy itself before that.

Question. What does it mean to discover over 4,000 extrasolar planets in just a quarter of a century?

Answer. It is a revolution in our view of the universe. It is the continuation of the Copernican revolution that made us see that the earth is not the center of the solar system. The discovery of exoplanets now helps us know that ours is one of many other solar systems. The diversity of exoplanets is fascinating because no one expected it. For obvious reasons we knew our Solar System very well and we had a model that worked very well to explain its origin and formation. But now we see that it cannot explain many of the planets we are discovering. We are just one system among many, and now we must understand them all.

P. What kind of questions will Cheops answer?

R. For example, we are now talking about super earths and mininetuns, two types of exoplanets, but we really don’t know what they are, or what they look like. Cheops is the first mission that will address this question and increase our understanding of the true nature of these worlds. First it will measure its size, which in turn can tell us something about its structure, especially if we also know its mass, which would tell us if we are facing a rocky world like Earth.

P. What would be the next step?

R. If the light from the star is reflected on these planets, the amount that reflects us will tell how its surface is, whether it is gas or rock, and whether these rocks are dark or light. This is a big step forward that prepares us for the next. Thanks to two instruments that will start working in the coming years, the James Webb space telescope it’s the Extremely Large Telescope in Chile, we will be able to study the light spectrum of the planet’s atmospheres as they pass before their star. All of this will shed light on the history of all known solar systems.

P. When do you think life will be discovered in an exoplanet?

R. It is very difficult. Before clarifying this we must answer two other questions. It is not clear that life outside the Solar System is as we know it. We are the product of concrete chemistry, and that chemistry has led to life forms such as we know, but there may be other types of chemistry that lead to other living forms. I am not talking about anything exotic, but on the same basis: water, carbon. You have to be very cautious, I don’t believe we learn anything by looking for life as we know it or even trying to hear signs of extraterrestrial civilizations. If we really want to learn, we must start from scratch, understand what are the fundamental elements of life.

P. How do you approach this goal?

R. It is necessary to approach the planets as a whole, to understand their nature, their chemistry, their precipitations. All of this applies to us in developing a theory of the origin of life that could be applied to both Earth and other stars and their planets. We are too far away yet. The study of exoplanets is not a new field, it is a new science. It is astrophysics, but also chemistry, biology and other disciplines. We have to start forming a new generation of exoplanet seekers that combine knowledge of astrophysics and chemistry, for example. Perhaps in 50 years, in 100 years, we will have the technical means and the knowledge to confirm that life in the universe is everywhere.

P. Are you skeptical of projects like SETI looking for signs of extraterrestrial civilizations?

R. I’m not. But I don’t believe you tell us anything about the origin of life. What it tells us is whether there is a possibility that advanced societies will survive themselves without destroying themselves. It is very interesting. How long does it take since a civilization develops nuclear weapons until it starts using them without causing their total destruction? We have spent 50 years. Can we continue 500 years?

P. When do you think we can reach any exoplanets?

R. We will not be able to reach any of these planets in the next 1,000 years. The technology to do so simply does not exist. Also, humans are not biologically designed for this trip. We may be able to send a robotic probe at some point, but the distances are so huge, it would be necessary to reach such a high speed that this barrier cannot be broken today.

P. In addition to searching for Earth-like planets, Cheops will allow you to look in detail at very different worlds, such as 55 Cancri-e.

R. We know many solar systems like this star, which has five planets. They are called and compact super Earth systems, because planets are extremely close to their star and very often find several planets together. In the case of 55 Cancri-e, the planet is slightly larger than the earth. We think it is rocky. We are still not sure if it lacks atmosphere, but there is plenty of evidence that it has already lost it and that the planet is covered by an ocean of lava. The heat of your sun has melted the rocks of this planet. It’s a hellish, extreme world, but we think planets of this kind are very abundant. More than half of all stars can have planets like this, and most interestingly, we don’t even understand how these worlds can form, how they evolve. So this will be one of the main goals of Cheops.

P. One day after winning the Nobel Prize, Michel Mayor told this newspaper that God does not need to explain the universe. What do you think?

R. I think this is not science. Science is based on facts and on the basis of them rational rational theories are formed that can be demonstrated. God has no place in this, it is something that exists only within you. You have to believe him. Science does not need you to believe in it. God is a psychological concept. Personally I do not need a God to explain the universe.

P. When will we get the first Cheops results?

R. If all goes well, in a couple of months we’ll start with the observation program. We already have some clear goals. One is a world that spins so fast that it is warping, flattening. I hope until the summer [do Hemisfério Norte] have the first scientific results.

P. What is the minimum and maximum distance this telescope can see?

R. Let’s look at stars that are very close at 10 light years, and we can get to about 200 light years. These are our nearest regions. Remember that the Kepler space telescope was looking at planets that are 2,000 light years away. Here we are exploring our nearest neighborhood.

In this article:Didier Queloz, extrasolar planets