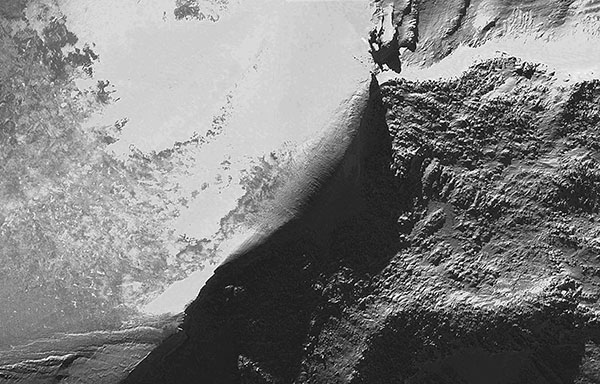 Moviegoers were recently treated to “Noah,” an epic story of bravery and sacrifice from the Old Testament, a saga in which the titular character takes on the divine mission to build an ark to save creation from an apocalyptic deluge.

Outside the big screen, speculation has swirled for decades that the leftovers of Noah’s Ark hug the heights of Mt. Ararat in eastern Turkey — at a spot known as the Ararat anomaly. In true detective jargon, call it an “anomaly of interest.”

Satellite imagery and analysis may make it possible to resolve the mystery.

Porcher Taylor, a professor of paralegal studies in the School of Professional and Continuing Studies at the University of Richmond, has led the search into the Mt. Ararat anomaly. Taylor’s quest began long ago, he said.

“The cognitive genesis of my journey began in 1973, some 41 years ago, in my junior year as a cadet at West Point,” he told Space.com. Back then, Taylor came across “credible rumors” ricocheting off the walls of the academy that a CIA spy satellite had accidentally imaged “what appeared to be the bow of a ship sticking up out of the ice cap on Mt. Ararat,” Taylor said.

Drawing on his  21 years of arm-chair sleuthing, Taylor has given unclassified presentations at the Pentagon and the U.S. Naval Surface Warfare Center.

Along the way, he declared victory in convincing the Defense Intelligence Agency in 1995 to declassify five 1949 U.S. Air Force aerial photos of Mt. Ararat. Additionally, thanks to Taylor’s invitations, a number of experts over the years have “performed analyses of the satellite imagery, which thankfully tempered my zeal as an amateur,” Taylor said.

So in this day and age, why continue the journey? The wealth of information provided by DigitalGlobe’s satellite imagery keeps Taylor going, he said.

“My ultimate goal has always been that my acquisition over the years of progressively higher- and higher-resolution satellite imagery from DigitalGlobe of the anomaly might definitively change the anomaly into a known entity, either something geological or perhaps something of Biblical proportions,” Taylor said.

DigitalGlobe’s new and powerful WorldView-3 spacecraft is slated for launch from California’s Vandenberg Air Force Base in summer 2014. Among its customer-provided attributes, the satellite will yield 31-centimeter (12 inches) panchromatic resolution, making it the highest-resolution commercial satellite in the world.

“DigitalGlobe’s constellation of satellites would be the envy of Indiana Jones,” Taylor told Space.com. “I’m grateful and humbled that Digital Globe has flown numerous gratis missions for me over Mt. Ararat over the past decade, especially the QuickBird satellite mission of February 2003 that captured the boat-like form of the anomaly at 15,000 feet, without excessive amounts of snow and ice cover.”

“State-of-the-art remote-sensing technology and analytics are now so advanced, we can not only view detailed information about man-made features, but also monitor the wonders of some of Mother Nature’s hidden treasures,” Navulur told Space.com. “For example, we have mapped polar bear patterns in the Arctic and penguin populations in the Antarctic,” he said.

Navulur said that satellite imagery provides such a precise view from space “that we are able to proactively observe environmental changes which unravel human footprints from thousands of years ago, such as the Ararat anomaly, and contribute to space archeology in a real and meaningful manner.”

Taylor hopes that a future DigitalGlobe satellite image might catalyze a scientific organization like National Geographic to launch an expedition to explore up under the ice cap on Mt. Ararat’s Western Plateau at the 15,000-foot level.

The “game-changing” WorldView-3 satellite, Taylor said, “might just accomplish that goal, as that will be the world’s first commercial satellite to have that skill set … a quantum leap in satellite technology!”

Additional analytical techniques have aided Taylor in his mission. He recently made use of a panchromatic texture uniqueness analysis of the anomaly, provided by remote sensing researcher and Ph.D. candidate Francois Luus from the Department of Electrical, Electronic and Computer Engineering at the University of Pretoria, South Africa, and Luus’ research supervisor, Sunil Maharaj.

Imagery used in the work was gleaned by the QuickBird satellite mission at 61 centimeters resolution in 2003. All the details of that recent analysis of the Mt. Ararat anomaly can be found in the following six-page report at: http://goo.gl/f8O3gs

Luus told Space.com that Taylor displays the tenacity and dogged determination characteristic of a successful investigator.

“His ability to rally support and repeatedly obtain specially commandeered satellite imagery of the Ararat anomaly is inspiring,” Luus said.

“The texture uniqueness analysis we performed provides a more objective artificial intelligence perspective that shows us the parts of the anomaly that have novel textures and warrant further investigation,” Luus said. “As a remote-sensing researcher, every pixel is given its due consideration, and good imagery is invaluable,” he said.

Further study may consider the locations pinpointed by the uniqueness search to find clues about an artifact underlying the anomaly, Luus said.

“We are very excited about the new DigitalGlobe WorldView-3 satellite, which can truly shed some new light on the anomaly with its very high panchromatic and multispectral resolutions,” Luus said. “Imagery of this quality may finally solve the riddle of the Ararat anomaly, or at least become the subject of a very satisfying remote sensing analysis,” he said.

Leonard David has been reporting on the space industry for more than five decades. He is former director of research for the National Commission on Space and is co-author of Buzz Aldrin’s new book “Mission to Mars – My Vision for Space Exploration,” published by National Geographic. Follow us @Spacedotcom, Facebook and Google+. Original article on Space.com.

In this article:Mt. Ararat, Noah’s Ark This program presents evidence that explorers have found the final resting place of a ship that may be Noah’s Ark as described in the...