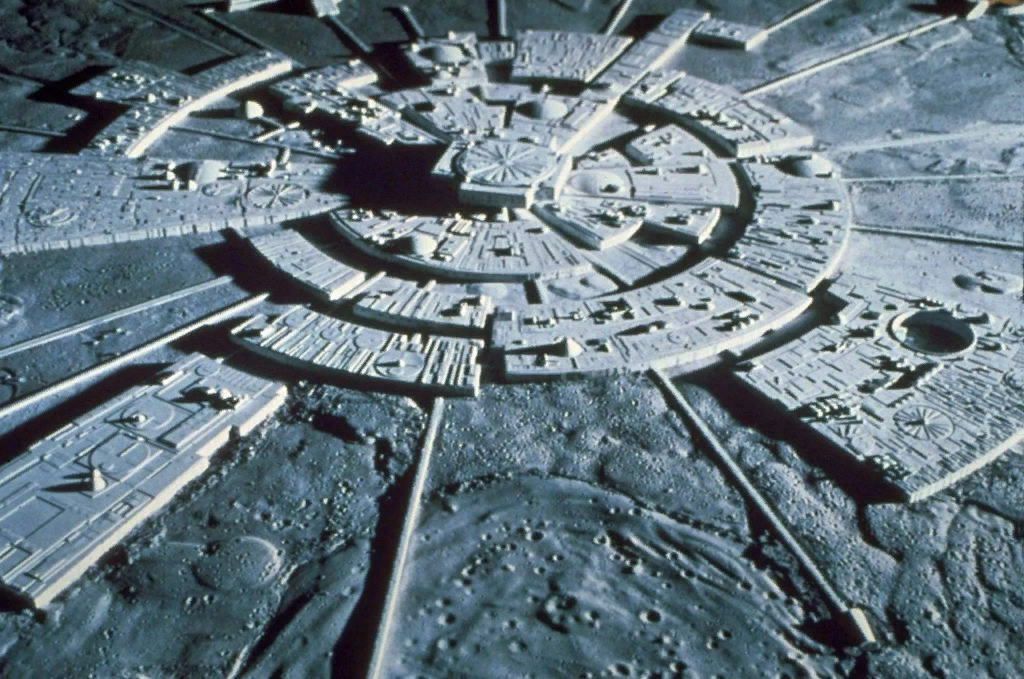 Ken Johnston and Richard Hoagland stated that at one time American astronauts discovered ruins of ancient cities and artifacts on the Moon, indicating the existence of some highly developed civilization on it in the distant past.

There was a time when no one expected that Earth’s space neighbor could baffle scientists with so many mysteries. Many imagined the Moon as a lifeless stone ball covered with craters, and on its surface there were ancient cities, mysterious huge mechanisms and UFO bases.

Why hide information about the moon?

UFO images taken by astronauts on lunar expeditions have long been published. The facts show that all the US flights to the moon took place under the complete control of the aliens. What did the first man on the moon see? Let us recall the words of Neil Armstrong intercepted by American radio amateurs:

Armstrong : “What is this? What the hell is it? I would like to know the truth, what is it?”

NASA:  “What’s going on? Is there anything wrong?”

Armstrong: “There are big objects here, sir! Huge! Oh my God! There are other spaceships here! They stand on the other side of the crater. They are on the moon and watch us!”

Much later, rather curious reports appeared in the press, which said that the Americans on the moon have made it clear that the place was occupied, and humans had nothing to do here. Allegedly, almost hostile actions took place on the part of aliens.

Thus, astronauts Cernan and Schmitt observed a mysterious explosion of the lunar module antenna. One of them relayed to the command module in orbit:

“Yes, it exploded. Something flew over her just before that … it still … ”  At this time, another astronaut enters the conversation: ” Lord! I thought we were going to be hit by this … this … just look at this thing!”

“There are extraterrestrial forces that are much stronger than we thought. I have no right to say anything more about it.”

Apparently, the inhabitants of the Moon did not welcome the envoys of the Earth very warmly, since the Apollo program was prematurely canceled, and the three ready-made ships remained unused. Apparently, the meeting was so cool that both the USA and the USSR forgot about the Moon for decades, as if there was nothing interesting on it.

After the famous panic in the United States in October 1938, the authorities do not risk traumatizing their citizens with messages about the reality of aliens. After all, then, during the broadcast on the radio of H. Wells’ novel “The War of the Worlds”, thousands of people thought that the Martians had actually attacked the Earth. Some fled in panic from the cities, others hid in basements, others built barricades and prepared with weapons in their hands to repel the invasion of terrible monsters.

On October 30, 2007, former NASA Lunar Laboratory Photographer Ken Johnston and writer Richard Hoagland held a press conference in Washington, DC, which immediately appeared on all the world’s news channels. And this is not surprising, because it was a sensation that caused the effect of an exploding bomb.

Johnston and Hoagland stated that at one time, US astronauts discovered on the moon the  ruins of ancient cities and artifacts that speak of the existence of some highly developed civilization on it in the distant past.

At the press conference, photographs of objects of clearly artificial origin were shown, present on the lunar surface. As Johnston admitted, NASA removed all details that could arouse suspicion of their artificial origin from the lunar photographic materials coming into the public domain.

“I saw firsthand how in the late 1960s NASA employees were ordered to paint over the negatives on the moonlit sky,” Johnston recalls. – When I asked: “Why?”, They explained to me: “In order not to mislead astronauts, because the sky on the moon is black!”

According to Ken, in a number of photographs, against a black sky, intricate configurations appeared in white stripes, which were the ruins of grandiose buildings that once reached  a height of several kilometers.

Of course, if such pictures were freely available, uncomfortable questions could not be avoided. Richard Hoagland showed reporters a snapshot of a grandiose structure – a glass tower, which they called a “castle”. This is possibly one of the tallest structures found on the moon.

Hoagland made a rather interesting statement:

“Both NASA and the Soviet space program separately discovered that  we are not alone in the universe. There are ruins on the moon, a legacy of a culture that was much more enlightened than we are now.”

So that the sensation does not become a shock

By the way, in the second half of the 90s, a similar briefing on the topic was already held. The official press release then read:

“On March 21, 1996, at a briefing at the National Press Club of Washington, NASA scientists and engineers involved in the implementation of the programs for the study of the Moon and Mars reported on the results of processing the information received. For the first time it was announced about the existence of artificial structures and objects of man-made nature on the Moon”.

Of course, already at that briefing, journalists asked why such sensational facts were hidden for so long? Here is the answer of one of the NASA employees, who said back then:

“… 20 years ago it was difficult to predict how people would react to the message that someone was or is on the Moon in our time. In addition, there were other reasons that were not related to NASA.”

It’s worth noting that NASA appears to have deliberately leaked information about extraterrestrial intelligence on the Moon. Otherwise, it is difficult to explain the fact that George Leonard, who published his book “There is Someone Still on Our Moon” in 1970, wrote it on the basis of numerous photographs that he gained access to at NASA.

It is curious that the entire circulation of his book almost instantly disappeared from store shelves. It is believed that it could have been bought in bulk so that the book would not be widely disseminated.

Leonard writes in his book:

“We were assured of the complete lifelessness of the Moon, but the data suggest otherwise. Decades before the space age, astronomers mapped hundreds of strange ‘domes’ and observed ‘cities that grow’, and single lights, explosions, geometric shadows were noticed by both professionals and amateurs.”

He provides an analysis of numerous photographs in which he was able to distinguish both artificial structures and gigantic mechanisms of amazing sizes. There is a feeling that the US has developed a certain plan for the gradual preparation of their population, and of humanity as a whole, to the idea that an extraterrestrial civilization has settled on the Moon.

Most likely, this plan even included the  myth of the lunar scam: well, since the Americans did not fly to the moon, it means that all reports about aliens and cities on the earth’s satellite cannot be considered reliable.

So, first there was a book by George Leonard, which did not receive wide distribution, then a briefing in 1996, information about which attracted wider attention, and, finally, a press conference in 2007, which became a worldwide sensation. And this did not lead to any shocks, because there was no official statement by the American authorities, and by NASA itself.

Will archaeologists be allowed to the moon?

Richard Hoagland was fortunate enough to get hold of photographs taken by Apollo 10 and Apollo 16, which clearly show the city in the Sea of ​​Crises. The pictures show towers, spiers, bridges and viaducts. The city is located under a transparent dome, in some places damaged by the impact of large meteorites. This dome, like many structures on the moon, is made of a material that looks like crystal or fiberglass.

Ufologists write that, according to secret research by NASA and the Pentagon, the “crystal” from which the lunar structures are made resembles steel in structure, and in terms of strength and durability it has no terrestrial counterparts.

Some researchers suggest that millions, and maybe tens of thousands of years ago, the Moon served as a transit base for some extraterrestrial civilization that has its own goals on Earth.

There are other hypotheses as well. According to one of them, lunar cities were built by a powerful earthly civilization that perished as a result of war or a global cataclysm.

Having lost support from Earth, the lunar colony withered and ceased to exist. Of course, the ruins of lunar cities are of great interest to scientists. Their study could give answers to many questions related to the ancient history of our civilization, perhaps, it would be possible to learn some high technologies.

Only now, will earthly archaeologists be allowed to the moon by its current owners?

In this article:aliens on the moon, moon base 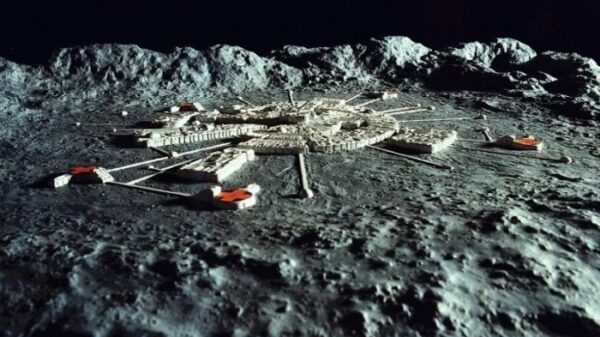 The far side of the moon – alien bases or an ancient astronaut’s cemetery?

The moon is a satellite of the Earth, and the only known astronomical object for today, where a person’s foot has stepped. The mysterious...