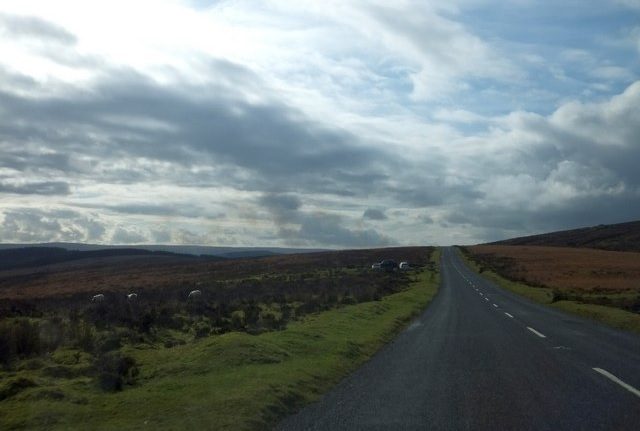 If you’re planning a journey along these strange highways, you’d better cross your fingers and reach for a four-leaf clover.

Because you can consider yourself extremely unlucky if your car breaks down on one of these lonely stretches – as you could end up with more than just a mechanic for company! Car breakdown experts at leading UK recovery firm 24|7 Vehicle Rescue have combed through the archives of paranormal sightings to compile this list of the “UK’s most haunted roads”. And one East Yorkshire road makes it on the list.

“So it’s no surprise to learn that there are thousands of strange and unexplained sightings on our roads, with many reports coming from isolated highways that cut through barren stretches of moor and mountain.

“Breaking down by the side of the road is clearly never an enjoyable thing.

“But we imagine the situation is made even worse when you’re seeing things through your windscreen, or rear view mirror, that really shouldn’t be there!”

East Riding of Yorkshire: B1249 between Driffield and Staxton Hill

Real life wolves roamed the wooded farmland of the East Riding of Yorkshire up until the 15th century, when they were hunted to extinction. But it’s wolves of the supernatural kind that get glimpsed there now.

One werewolf report from the 1960s, and documented by author Charles Christian, describes how a lorry driver was left terrified when a red-eyed hairy creature tried to smash its way through his windscreen as he drove along the remote road.

Then in August 2016, motorist Jemma Waller, 24, described seeing a monster which looked “like a big dog, ­probably bigger than my car, but it had a human face” in the nearby village of Halsham.

Dartmoor: B3212 between Dunsford and Yelverton

B3212 between Dunsford and Yelverton

Dartmoor is described as the most remote location in southern England. And the B3212 which cuts through it is home to mysterious “hairy hands” myth – with motorists describing how a disembodied pair of mitts grabs their steering wheel and tries to run them off the road.

In 1962 holiday-maker Florence Warwick was driving the route when she stopped the car to look at a map. She recalled: “I looked up and saw a pair of huge, hairy hands pressed against the windscreen. I tried to scream, but couldn’t. I was frozen with fear.”

Another eyewitness in 2008, Michael Anthony, told how a pair of “paws” appeared over his own hands while driving. 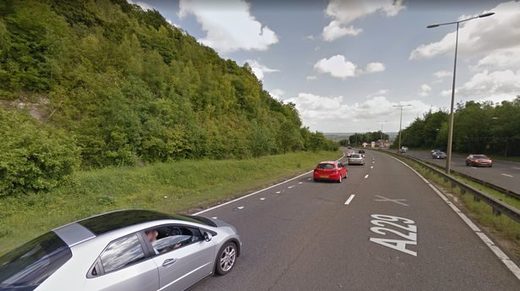 The ghost of a young bride has been terrifying motorists – and baffling police – on this stretch of road between Maidstone and Chatham since 1974.

He told cops: “The girl’s just walked out in front of me from the edge of the road. My car hit her with one hell of a bang”. Yet police and tracker dogs found no trace of any victim.

At the time, PC Roger Ginn reported: “Once we were satisfied there was no sign of an accident, no damage to his car, and particularly in view of where it had occurred, we just had to write it off as another sighting of the Blue Bell Hill ghost.”

Surrey: A3 at Burpham

In December 2002, Surrey Police investigated reports of a car seen swerving off the A3 near Burpham.

They eventually found a car in a ditch containing the remains of a driver – but the motorist had perished some five months previously, leading to speculation the sighting had been a ghostly re-enactment of the crash which killed him.

Sergeant Russ Greenhouse, of Surrey Police, said: “The car was discovered as a result of a report from members of the public who thought they saw a car’s headlights veering off the road.

“The officers could not identify that collision but they had the presence of mind to search on foot.”

Greater Manchester: The A6 at Stockport, near Mersey Square

The A6 at Stockport, near Mersey Square

For years the A6, which runs between Manchester and Buxton, has been the haunt for a phantom female motorcycling hitchhiker, who thumbs a lift before vanishing into thin air.

Eyewitness Harold Smith recently recalled his run-in from the early 1990s, saying: “As I came down the long hill, I saw a figure on the left-hand pavement.

“She was slim with dark, straight shoulder-length hair, wearing a short jacket and trousers and holding a helmet.

“As I approached, she walked to the kerb and stuck her thumb out. People don’t usually thumb lifts from motorcyclists.

“When I stopped in the lay-by and looked back over my shoulder, I couldn’t see her any more. I waited, revved the engine, but gave up and rode home. The whole thing was very strange.”

Northumberland: The A696 near Belsay 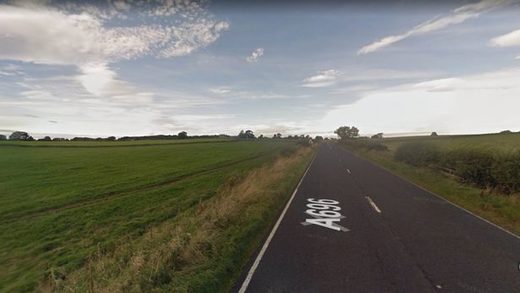 The A696 near Belsay

In August 2015 Gateshead-based radio presenters Rob Davies and Chris Felton had a run-in with a ghost dressed in RAF uniform on this remote rural road.

Rob explained: “We saw a man standing at the side of the road. We both actually jumped at first because we didn’t see him until very late.

“He was dressed in a beige colour from head to toe. He was sticking his arm out for a lift, but we could not stop in time due to being at 60mph.

“We turned around and I started filming on my iPhone as it seemed a bit odd. We couldn’t remember how far back he was, but we saw him again and slowed.

“He was dressed in what I can only describe as RAF gear and was holding something under his arm, which looked like a helmet or some kind of bag. It was only seconds and no other car had been past, but when we turned around he was gone.”

Scotland: The A75 ‘Kinmount Straight’ 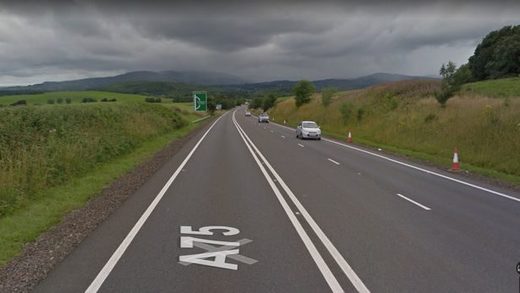 Dubbed the “most haunted highway in Scotland”, the A75 is apparently home to “screaming hags, eyeless phantoms and a menagerie of unearthly creatures”, according to local paranormal investigator Kathleen Cronie.

The most famous sighting came in 1962, as reported by Derek and Norman Ferguson. They witnessed a chicken flying towards their windscreen before dematerialising, as well as giant cats and a furniture van that also disappeared into the ether.

Cheshire: The M6 between Crewe and Knutsford 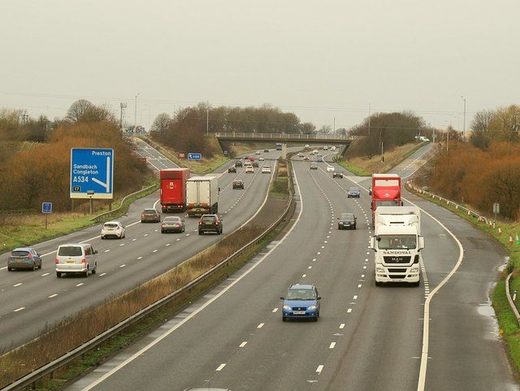 M6 junction 17 from the south

Many motorists have been distracted by what looked like Roman Soldiers marching on the side of the highway, while others have reported hitting “translucent” figures with their vehicles.

One report, from an eyewitness travelling home to Wirral, told last month: “It was a really freaky experience. I was driving on the M6, around junction 17, when I thought I saw a figure ahead.

“I immediately slowed down. I could seen that this ‘person’ was in the middle lane. To me, it looked like the figure had run across the lanes and was now waiting for me to him them – as if they were suicidal.

“But as I got closer the figure didn’t look like a solid figure. It looked almost translucent. And then the figure just vanished. There was nothing there. I literally blinked and it had gone.

“I checked my mirrors and there was nothing behind me. I don’t logically believe in ghosts and the supernatural. For now I’m telling myself that my brain was playing tricks on me.

“But my brain was suitably convinced that something was amiss that I slammed on the brakes and swerved to avoid hitting whatever was in my way.”

Sheffield: The A616 at Stocksbridge 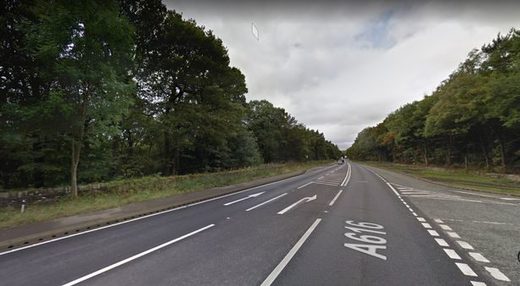 The A616 at Stocksbridge

This stretch of road has been described as “the Killer Road” in recent years.

The Stocksbridge bypass was completed in 1989 and has been called “an accident black spot”, with large numbers of fatalities.

The stories of a paranormal nature began during the building of the road when two security guards tasked with keeping watch over building materials claimed they saw a group of children dancing beneath a pylon in the early hours, they had their claims laughed off when they called Deepcar police station, with officers saying they would be better off phoning a priest”

Advertisement. Scroll to continue reading.
In this article:haunted roads, UK