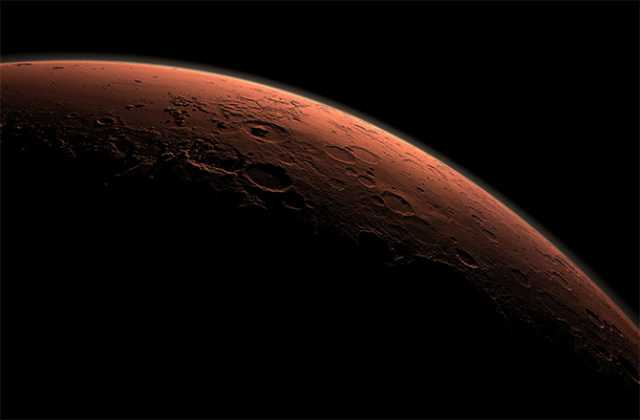 Amateur astronomers gazing at Mars have discovered gigantic plumes soaring more than 125 miles above the planet’s surface, a phenomenon that so far defies explanation.

At least 18 sightings were reported during two 10-day periods in March and April 2012, when plumes appeared over an area known as Terra Cimmeria, located in Mars’ southern hemisphere.

The plumes extended over 500- to 1,000 kilometers (311- to 621 miles) in both north-south and east-west directions and changed in appearance daily. They were detected as the sun breached Mars’ horizon in the morning, but not when it set in the evening.

“Remarkably … the features changed rapidly, their shapes going from double blob protrusions to pillars or finger-plume-like morphologies,” scientists investigating the sightings wrote in a paper published in this week’s Nature.

Spacecraft and ground-based telescopes previously had seen clouds made of carbon dioxide and water ice crystals on Mars, but the clouds were typically layered and never rose above 100 kilometers, or 62 miles, from the planet’s surface, the researchers noted.

Clouds of dust can be kicked up into the atmosphere during storms, but these max out at about 37 miles in altitude, they added.

The plumes could be some sort of very unusual aurora, 1,000 times brighter than anything seen on Earth, triggered by a very strong magnetic pocket in the planet’s crust that drove solar wind particles out into the atmosphere.

Current understanding of Mars’ atmosphere, however, leaves all explanations wanting.

“Our explanation of this plume as an aurora would require an immense energetic flux, which our calculations show are highly unrealistic,” physicist Agustin Sanchez-Lavega, with the University of the Basque Country in Spain, wrote in an email to Discovery News.

“We favor the cloud scenario — the condensation of water or carbon dioxide — since the plume formed in the cold mornings, but we note for this to occur, a large drop in temperature is required at 200 km, something not foreseen by any atmospheric model. Therefore, very particular conditions occurred at that time in the area that currently we do not understand,” he added

The first plume, spotted on March 12, 2012, appeared as a small protrusion in the morning day-night boundary of the Martian southern hemisphere, which was in early winter.

The plume grew over the next several days and between March 20 and March 21 was captured by at least 18 observers using small telescopes.

The phenomenon appeared for a second time over the same area for 10 days between April 6 and April 16, 2012.

“Analysis shows the extreme altitude of the plume top to be above 200 km (124 miles), never before observed on Mars, and reaching the ionosphere and exosphere,” the researchers wrote.

More clues may come from NASA’s MAVEN spacecraft, which arrived at Mars in September to study the planet’s atmosphere.

“MAVEN has the ability to see this type of feature very clearly, if it’s observing at the right place and the right time,” lead scientist Bruce Jakosky, with the University of Colorado, told Discovery News.

“This type of feature must be very rare, to have been observed only once out of all of the time that telescopic observers and spacecraft have been observing Mars … Frankly, I’m puzzled by the observations. I don’t understand how material can get that high and stay there for so long. At those altitudes, molecules should be on ballistic trajectories and not colliding with anything, so a cloud should quickly collapse,” Jakosky said.

Winds that high in the atmosphere also should quickly dissipate any clouds, he added. “I’m surprised that it lasted for something like 10 days. But the observations are pretty compelling.”