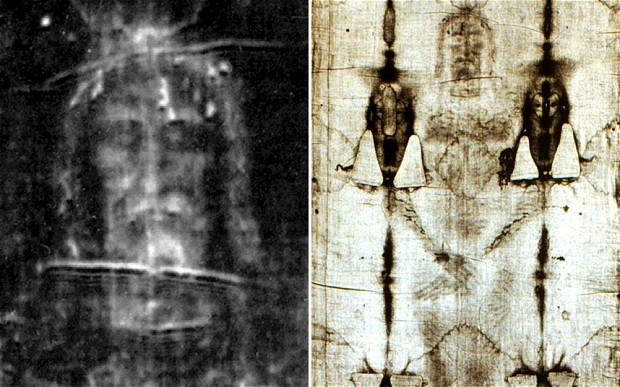 The Turin Shroud is not a medieval forgery, as has long been claimed, but could in fact date from the time of Christ’s death, a new book claims

Experiments conducted by scientists at the University of Padua in northern Italy have dated the shroud to ancient times, a few centuries before and after the life of Christ.

Many Catholics believe that the 14ft-long linen cloth, which bears the imprint of the face and body of a bearded man, was used to bury Christ’s body when he was lifted down from the cross after being crucified 2,000 years ago.

The analysis is published in a new book, “Il Mistero della Sindone” or The Mystery of the Shroud, by Giulio Fanti, a professor of mechanical and thermal measurement at Padua University, and Saverio Gaeta, a journalist.

The tests will revive the debate about the true origins of one of Christianity’s most prized but mysterious relics and are likely to be hotly contested by sceptics.

Scientists, including Prof Fanti, used infra-red light and spectroscopy – the measurement of radiation intensity through wavelengths – to analyse fibres from the shroud, which is kept in a special climate-controlled case in Turin.

The experiments were carried out on fibres taken from the Shroud during a previous study, in 1988, when they were subjected to carbon-14 dating.

Those tests, conducted by laboratories in Oxford, Zurich and Arizona, appeared to back up the theory that the shroud was a clever medieval fake, suggesting that it dated from 1260 to 1390.

But those results were in turn disputed on the basis that they may have been skewed by contamination by fibres from cloth that was used to repair the relic when it was damaged by fire in the Middle Ages.

Mr Fanti, a Catholic, said his results were the fruit of 15 years of research.

He said the carbon-14 dating tests carried out in 1988 were “false” because of laboratory contamination.

The mystery of the shroud has baffled people for centuries and has spawned not only religious devotion but also books, documentaries and conspiracy theories.

The linen cloth appears to show the imprint of a man with long hair and a beard whose body bears wounds consistent with having been crucified.

Each year it lures hundreds of thousands of faithful to Turin Cathedral, where it is kept in a specially designed, climate-controlled case.

Scientists have never been able to explain how the image of a man’s body, complete with nail wounds to his wrists and feet, pinpricks from thorns around his forehead and a spear wound to his chest, could have formed on the cloth. Mr Fanti said the imprint was caused by a blast of “exceptional radiation”, although he stopped short of describing it as a miracle.

He said his tests backed up earlier results which claimed to have found on the shroud traces of dust and pollen which could only have come from the Holy Land.

Mr Gaeta is also a committed Catholic – he worked for L’Osservatore Romano, the Vatican newspaper, and now works for Famiglia Cristiana, a Catholic weekly.

The Vatican has never said whether it believes the shroud to be authentic or not, although Pope Emeritus Benedict XVI once said that the enigmatic image imprinted on the cloth “reminds us always” of Christ’s suffering.

His newly-elected successor, Pope Francis, will provide an introduction when images of the shroud appear on television on Saturday, the day before Easter Sunday, which commemorates the resurrection.

The Pope has recorded a voice-over introduction for the broadcast on RAI, the state television channel.

“It will be a message of intense spiritual scope, charged with positivity, which will help (people) never to lose hope,” said Cesare Nosiglia, the Archbishop of Turin, who also has the title “pontifical custodian of the shroud”.

“The display of the shroud on a day as special as Holy Saturday means that it represents a very important testimony to the Passion and the resurrection of the Lord,” he said.

For the first time, an app has been created to enable people to explore the holy relic in detail on their smart phones and tablets.

The app, sanctioned by the Catholic Church and called “Shroud 2.0”, features high definition photographs of the cloth and enables users to see details that would otherwise be invisible to the naked eye.

“For the first time in history the most detailed image of the shroud ever achieved becomes available to the whole world, thanks to a streaming system which allows a close-up view of the cloth. Each detail of the cloth can be magnified and visualised in a way which would otherwise not be possible,” Haltadefinizione, the makers of the app, said.