More than 50 geoglyphs with various shapes and sizes, including a massive swastika, have been discovered across northern Kazakhstan in Central Asia, say archaeologists.

These sprawling structures, mostly earthen mounds, create the type of landscape art most famously seen in the Nazca region of Peru.

Discovered using Google Earth, the geoglyphs are designed in a variety of geometric shapes, including squares, rings, crosses and swastikas (the swastika is a design that was used in ancient times). Ranging from 295 to 1,312 feet in diameter, some of them are longer than a modern-day aircraft carrier. Researchers say that the geoglyphs are difficult to see on the ground, but can easily be seen from the sky. [See Photos of the Amazing Geoglyphs in Kazakhstan]

Over the past year, an archaeological expedition from Kazakhstan’s Kostanay University, working in collaboration with Vilnius University in Lithuania, has been examining the geoglyphs. The team, which is conducting archaeological excavations, ground-penetrating radar surveys, aerial photography and dating, recently presented its initial results at the European Association of Archaeologists’ annual meeting in Istanbul.

Many of the geoglyphs were made of earthen mounds, although one example, a swastika, was made using timber.

Archaeological excavations uncovered the remains of structures and hearths at the geoglyphs, suggesting that rituals took place there, said archaeologists Irina Shevnina and Andrew Logvin, of Kostanay University, in an email to Live Science. Ancient tribes may also have used the geoglyphs to mark ownership of the land, the researchers noted.

“As of today, we can say only one thing the geoglyphs were built by ancient people. By whom and for what purpose, remains a mystery,” said Shevnina and Logvin.

Why they’re builders used geometric shapes is also a mystery, although the swastika is an ancient symbol found throughout Europe and Asia.

Geoglyphs around the world

While Peru’s Nazca Lines are the world’s most famous geoglyphs, archaeological research suggests that geoglyphs were constructed in numerous areas around the world by different cultures.

For instance, in the Middle East, archaeologists have found thousands of wheel-shaped structures that are easily visible from the sky, but hard to see on the ground. Also recently in Russia, archaeologists excavated a geoglyph shaped like an elk, which appears older than the Nazca Lines.

Ancient geoglyphs have also been reported in many other countries, including the United Kingdom, Brazil and even the Southwestern United States. The introduction of high-resolution Google Earth imagery over the last decade has helped both professional archaeologists and amateurs detect and study these enigmatic structures. 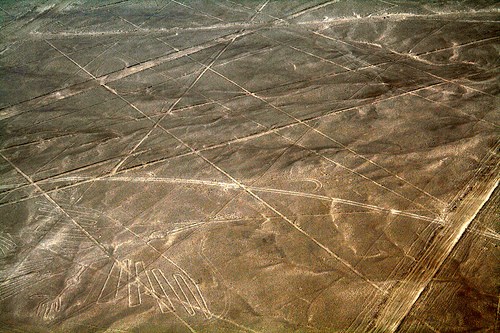 The Peruvian Nazca Lines are quite stunning by their own but they seem to amaze the scientists, even more, each day. The new 25...