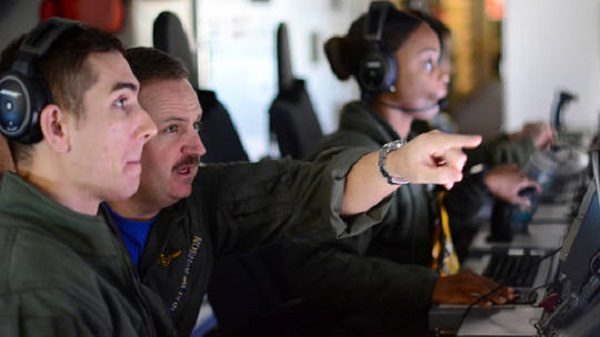 Members of the US Navy aboard the Boeing P-8A Poseidon plane.

Crew members who were aboard a Navy warship during a freak encounter with unidentified flying objects in 2004 have come forward with new details about the mysterious episode, offering captivating first-hand accounts.

On a training mission with the Nimitz carrier group in November 2004 about 100 miles off the coast of Southern California, technicians on the USS Princeton began to notice anomalous “ghost tracks” and “clutter” on the ship’s radars.

Concerned the Princeton’s brand new AN/SPY-1B radar system was acting up, the crew recalibrated the high tech gear to clear the errors, but the ostensibly “false” radar tracks only amplified and became stronger, the first sign something rather strange was happening.

“Once we finished all the recalibration and brought it back up, the tracks were actually sharper and clearer,” former Petty Officer 3rd Class and Princeton radar technician Gary Voorhis told Popular Mechanics. “Sometimes they’d be at an altitude of 80,000 or 60,000 feet. Other times they’d be around 30,000 feet, going like 100 knots.”

Their radar cross sections didn’t match any known aircraft; they were 100 percent red … no IFF [Identification Friend or Foe].

Kevin Day, a Senior Chief Operations Specialist tasked with monitoring the airspace around the Princeton, also noticed the bizarre radar artifacts from the ship’s Combat Information Center, which continued for several days.

“The reason why I say they’re weird [is] because they were appearing in groups of five to 10 at a time and they were pretty closely spaced to each other,” Day said in the documentary ‘The Nimitz Encounters,’ describing the radar tracks.

As the crew kept tabs on the mysterious signals, Voorhis became convinced this was no typical radar error, and attempted to put eyes on whatever was causing the anomaly. Using the ship’s systems to pinpoint the signal and then peering through heavily-magnified binoculars, he finally caught a glimpse. While the objects were too far away to clearly discern, Voorhis is sure he saw something zipping around in the distance.

“I couldn’t make out details, but they’d just be hovering there, then all of a sudden, in an instant, they’d dart off to another direction and stop again,” Voorhis said.

After nearly a week of hide-and-seek with the objects, Day persuaded his superiors to allow an intercept attempt, dispatching two F/A-18s to investigate. Making visual contact from about a mile away, the fighter pilots said they spotted an “elongated egg”-like object, “solid white, smooth, with no edges,” according to an executive summary from an “unofficial” military investigation into the incident obtained by journalist George Knapp. The objects proved too elusive for the fighter jets, however, and they were eventually forced to abandon the effort.

A second attempt would produce the now-infamous infrared footage, leaked to the media in 2017, featuring a pill-shaped object hovering in the sky, and audio of bewildered fighter pilots struggling to identify the craft. While the footage was first released by the military for use in an internal database in 2017, the Pentagon only confirmed its authenticity in September, and maintains it was never cleared for release to the general public.

Over a decade on from the mysterious encounter, Princeton crew members are still scratching their heads about what happened that week in November of 2004, as well as the events that followed.

Soon after the F/A-18 intercept, Voorhis says two men arrived on the Princeton in search of the data recordings captured during the run-in, which he was ordered to turn over immediately. Other recording devices on the ship had also been wiped clean. “They even told me to erase everything that’s in the shop – even the blank tapes,” he said.

“What really made this incident alarming was when a Blackhawk helicopter landed on our ship and took all our information from the top secret rooms,” another sailor aboard the Princeton told Popular Mechanics under condition of anonymity.

“We were all pretty shocked and it was an unspoken rule not to talk about it because we had secret clearances and didn’t want to jeopardize our careers,” he added.

Skeptical about a cover-up, however, one of the F/A-18 pilots present for the intercept, Commander David Fravor, believes the data was simply lost or recorded over on accident, though he acknowledges the disappearance of data records on the ship.

“I think Cmdr. Fravor’s opinion on how the tapes went missing is the most plausible explanation,” Vincent Aiello, another retired fighter pilot familiar with Fravor’s account, told Popular Mechanics. “However, a lot of squadron personnel have access to those materials, so it leaves the door open that someone could have intentionally taken them.”

Despite the disagreement among some of the crew about whether the Pentagon sought to bury the event under the rug, several witnesses remain convinced something bigger than a radar error was at work and stand by their stories.

“This thing, it was so much more than what you see in [the 2017] video,” said former Petty Officer 3rd Class and Princeton crew member Jason Turner.