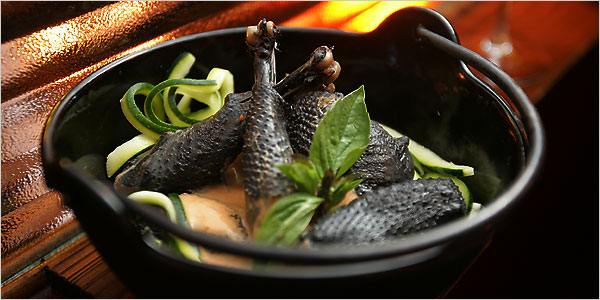 Chinese medicinal therapeutic treatments have been recognized for decades as some of the best natural treatments ever created. As early as the Thirteenth century, black chickens were revealed in China, and have been used in Chinese medicine for well over 1,000 years. Recently popular in American delicacies, the black chicken is now considered a “superfood”. The theory of “superfood” status for the black chicken is related to the bird’s high levels of anti-oxidants. An anti-oxidant is a molecule that slows down the oxidation of other chemicals in the human body. Although oxidation is essential to human life, antioxidants help to keep the process at a healthy level. The specific antioxidant present in black chickens is carnosine.

Carnosine is a substance found in high concentrations in the human brain and muscle tissues. This substance holds many antioxidant properties which are currently being studied for their positive effects in the fields of auditory, speech skills, motor development, and opthamology. The levels of carnosine in a black chicken are two times higher than those in traditional chickens. Carnosine can also be found in turkey as well as supplements offered at vitamin shops and nutrition centers.

Until recently the strange characteristics of the black chicken have rendered it unpopular in European and American cultures. The chicken is born with black bones, meat and skin and is considered a bantam or miniature chicken.

Historically the chicken was eaten as a medicinal cure and is said to have a positive effect on the yin, blood, lungs and stomach. The chicken is most commonly served as a part of a stew or soup cooked with other Chinese medicinal herbs such as wolfberries and ginseng. The black chicken is certainly the new kid on the block in the “superfood” market. Its small size and unappealing looks will undoubtedly deter some consumers from purchasing the product, but with plans to increase the size of the chicken through interbreeding, we will surely see this Chinese medicinal secret in mass distribution in no time.

Did you know there was such a thing as black chicken? And I don’t mean as in dark feathers, but black skin, bones and even internal organs. There are actually several black chicken breeds in the world, especially in Asia, but the most popular of all has to be the Chinese Silkie.

Silkies are beautiful birds, covered in fluffy plumage, which is said to feel like silk, but underneath all that fluff they are far less attractive. Their skin is a dark-bluish color, the flesh is dark beige and the bones and some internal organs are pitch black. Although in the Western world silkie chickens are sold mainly for ornamental purposes, in countries like China they are considered a super food and are appreciated for their deep, gammy flavor. Called “wu gu ji” or “black-boned chicken”, the silkie has been prized for its medicinal value ever since the seventh or eighth century. Chinese women consume it after they have given birth to get a boost of energy, but it’s also said to have a positive effect on the yin, blood, lungs and stomach. Silkie meat is rarely roasted. To take full advantage of its curative properties, the Chinese mainly use it to make an amber-colored broth laced with ginseng , dried wolfberries and jujubes.

According to a genetic study published in 2011, the unique trait of silkie chickens, known as fibromelanosis, is caused by an unusual genetic mutation characterized as “a complex rearrangement that leads to increased expression of Endothelin 3, a gene which is known for promoting the growth of pigment cells”. The massive expansion of pigment cells not only makes the skin and bones black, but also causes dark internal organs. Another interesting thing about silkies is their high content of carnosine, a naturally occurring peptide which is sold as a dietary supplement. People take it to increase muscle mass, ward of the effects of aging and alleviate diseases like diabetes or autism. Studies have shown the black chicken is one of the richest sources of carnosine. If you’re wondering how black chicken meat tastes, most people say it’s no different than traditional chicken, but some say it’s a little sweeter. So, would you embrace the dark side and feast on the dark flesh of a silkie?