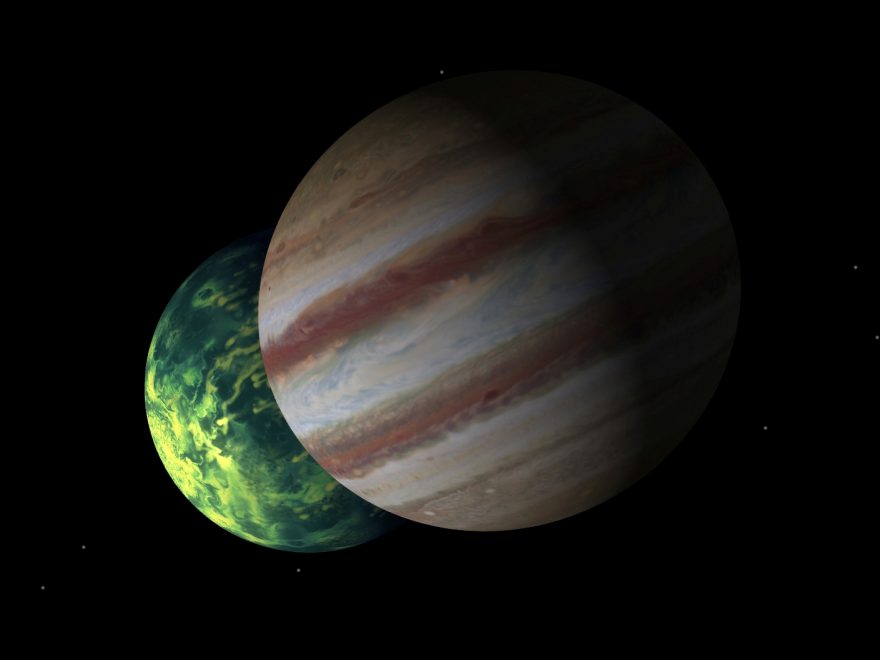 NASA’s Deep Impact spacecraft is aiming its largest telescope at five stars in a search for alien (exosolar) planets as it enters its extended mission, called Epoxi.

Deep Impact made history when the mission team directed an impactor from the spacecraft into comet Tempel 1 on July 4, 2005. NASA recently extended the mission, redirecting the spacecraft for a flyby of comet Hartley 2 on Oct. 11, 2010.

As it cruises toward the comet, Deep Impact will observe five nearby stars with “transiting exosolar planets,” so named because the planet transits, or passes in front of, its star. The Epoxi team, led by University of Maryland astronomer Michael A’Hearn, directed the spacecraft to begin these observations Jan. 22. The planets were discovered earlier and are giant planets with massive atmospheres, like Jupiter in our solar system. They orbit their stars much closer than Earth does the sun, so they are hot and belong to the class of exosolar planets nicknamed “Hot Jupiters.”

However, these giant planets may not be alone. If there are other worlds around these stars, they might also transit the star and be discovered by the spacecraft. Deep Impact can even find planets that don’t transit, using a timing technique. Gravity from the unseen planets will pull on the transiting planets, altering their orbits and the timing of their transits.

“We’re on the hunt for planets down to the size of Earth, orbiting some of our closest neighboring stars,” said Epoxi Deputy Principal Investigator Drake Deming of NASA’s Goddard Space Flight Center in Greenbelt, Md. Epoxi is a combination of the names for the two extended mission components: the exosolar planet observations, called Extrasolar Planet Observations and Characterization (Epoch), and the flyby of comet Hartley 2, called the Deep Impact Extended Investigation (Dixi). Goddard leads the Epoch component.

More than 200 exosolar planets have been discovered to date. Most of these are detected indirectly, by the gravitational pull they exert on their parent star. Directly observing exosolar planets by detecting the light reflected from them is very difficult, because a star’s brilliance obscures light coming from any planets orbiting it.

However, sometimes the orbit of an exosolar world is aligned so that it eclipses its star as seen from Earth. In these rare cases, called transits, light from that planet can be seen directly.

Deep Impact will also look back to observe Earth in visible and infrared wavelengths, allowing comparisons with future discoveries of Earth-like planets around other stars.