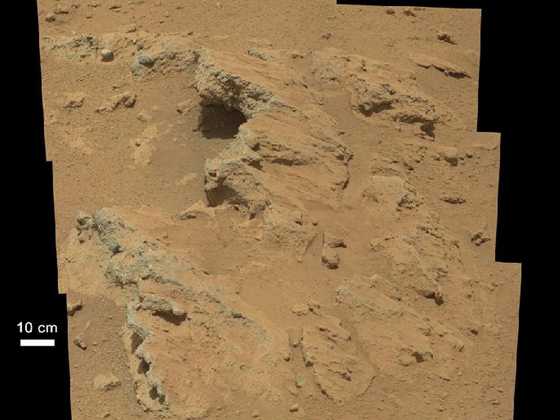 The Curiosity Rover has found evidence of an ancient stream that flowed “vigorously” on Mars where the Rover is now exploring, NASA said on Thursday.
NPR reports that this is “definitive proof” that water once existed on Mars.

Stream bed gravels were observed among the rocks on the surface of Mars, according to a statement from NASA.
“From the size of gravels it carried, we can interpret the water was moving about 3 feet per second, with a depth somewhere between ankle and hip deep,” said Curiosity science co-investigator William Dietrich of the University of California, Berkeley.
The rock outcrop was named “Hottah” after Hottah Lake in Canada’s Northwest Territories, per The Scientific American.
Reacting to the news, American astrophysicist Neil deGrasse Tyson wrote in an email to The Huffington Post:
‎”As a scientist, it’s always a good feeling to obtain confirming evidence for something you had strongly suspected was true. Curiosity has just taken us there. But it’s an even better feeling to find evidence that conflicts with long-held ideas. Over its usable life, Curiosity will almost surely take us there too.”  Space.com adds that the discovery doesn’t just mean there was water on Mars, but that it flowed in “large volumes” at one time.

In this article:Curiosity Rover, Mars, Nasa