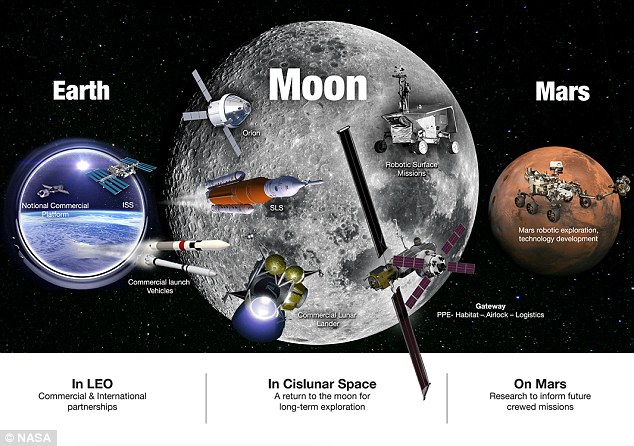 NASA has outlined a new campaign to put humans back on the moon, and eventually send astronauts to Mars.

The space agency recently submitted a plan to Congress to ramp up its plans for human space exploration, with five new strategic goals to guide upcoming missions.

These goals rely on recent advances in commercial space operations and the upcoming Orion spacecraft and Space Launch System rocket.

As of now, NASA says it wants to have astronauts on the surface of the moon no later than the 2020s, and have humans in lunar orbit by 2023.

‘This will be the first chance for the majority of people alive today to witness a Moon landing – a moment when, in awe and wonder, the world holds its breath,’ NASA says.

‘However, America will not stop there.’

Missions to Mars following the moon initiatives are currently targeting the 2030s.

The New Exploration Campaign has five strategic goals, the first of which will be shifting human spaceflight activities in low-Earth orbit to commercial operations.

The agency also plans to establish operations on the lunar surface and in orbit to facilitate missions to deeper space.

They also plan to identify resources on the lunar surface using robotic missions.

And in the years to come, they’re hoping to put US astronauts back on the moon, and demonstrate the capabilities to get to Mars and beyond.

Many of these plans rely on plans for modules called Gateway.