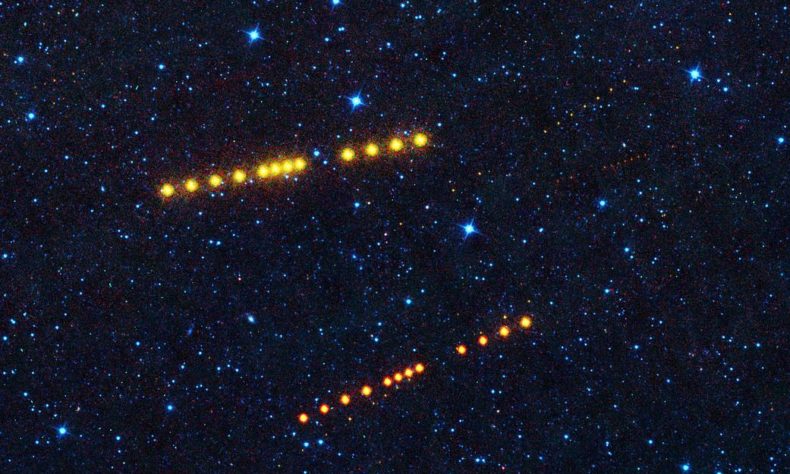 NASA published an amazing image of two giant asteroids traveling in the asteroid belt, both of which are larger than some of the cities in the world.

The American Space Agency shared a snapshot that tracks the movement of the large asteroids Lina and Klotho, located in the asteroid belt between Mars and Jupiter. The Lina is about 37 miles (60 km) in diameter and has more than 2,000 days in orbit around the Sun. Klotho is slightly larger, having 50.9 miles (82 km) in diameter and has a 1596-day orbit around our main star.

“appearing as rows of orange dots, the brightest sets of dots belong to the asteroids of Klotho and Lina. Both rotate in the main asteroid belt between Mars and Jupiter, while smaller and more distant asteroids can also be seen on this image ”

These space objects were photographed by NEOWISE as part of the Wise mission (Wide-field Infrared Survey Explorer) asteroid hunting project.

Cosmic stones within the asteroid belt supposedly pose almost no danger to the Earth, due to the role that Jupiter plays in the solar system. The giant planet has such a powerful gravitational attraction that it actually helps to keep the asteroid belt in place, so objects do not travel throughout the system.

If Jupiter did not use its gravitational pull on these objects in the belt, the inner planets would be constantly at risk of collisions with large asteroids.

“The presence of Jupiter actually protects Mercury, Venus, Earth, and Mars from repeated collisions with asteroids!”, The NASA statement said.

The probability of a major asteroid colliding with the Earth is one in 300,000 chance. However, such a prospect is possible, NASA says.

Advertisement. Scroll to continue reading.
In this article:Giant asteroids, Nasa