A strange, unearthly “shriek” greeted NASA’s Voyager I spacecraft as it became the first man-made object to enter interstellar space.

A strange rising “howl” was detected by instruments aboard the 36-year-old probe, which has travelled 12 billion miles away from our sun.

The sound was transmitted back to scientists on Earth, over a distance so vast radio waves take 17 hours to reach us. Science site iO9 described the sounds as “creepy” and “wraithlike”.

NASA announced this week that the tiny probe has now left the “solar bubble” – a historic moment which marks our species entry into interstellar space.

The “howls” and “shrieks” detected by Voyager’s instruments – actually waves in plasma in space – provided proof. 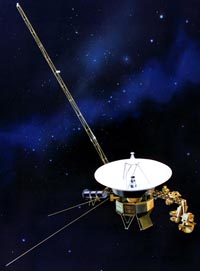 The plasma waves are inaudible in space, but , “These frequencies are within the range heard by human ears,” says NASA. “The soundtrack reproduces the amplitude and frequency of the plasma waves as “heard” by Voyager 1. The waves detected by the instrument antennas can be simply amplified and played through a speaker.”

The rising tones of the “shrieks” of space allowed scientists to realise that Voyager first entered “interstellar plasma” – ionized gas in the space betwen the stars – in August 2012.

“This conclusion is possible from the space craft’s plasma wave instrument,” Ed Stone, Voyager project scientist based at the California Institute of Technology, Pasadena.. “The 36-year old probe is now sailing through uncharted waters of a new cosmic sea and it has brought us along for the journey.”

“Now that we have new, key data, we believe this is mankind’s historic leap into interstellar space. The Voyager team needed time to analyze those observations and make sense of them. But we can now answer the question we’ve all been asking — ’Are we there yet?’ Yes, we are.”

The discovery of the strange sounds – and of the fact that Voyager had entered interstellar space was made possible by an eruption on the sun, which send a burst of “solar wind” towards the tiny craft.

Read the full article at: news.yahoo.com

Advertisement. Scroll to continue reading.
In this article:howl, Nasa, Voyager I