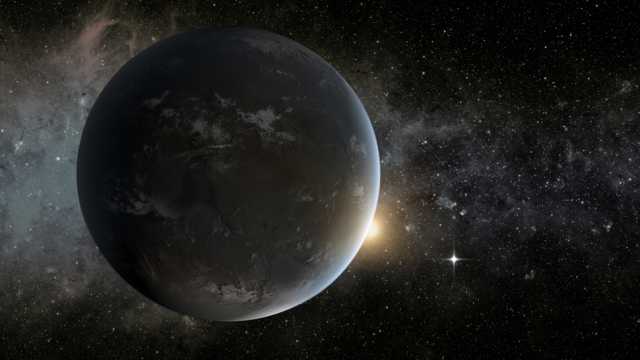 NASA’s Kepler mission has discovered a trio of distant planets that look remarkably like our own. Belonging to solar systems located 1,200 and 2,700 light years from Earth, the three Earth-sized worlds have been spotted orbiting in the so-called Goldilocks Zone of their parent stars – the “just-right” range at which liquid water, and life, can exist on a planet’s surface.
NASA’s Kepler mission has been hunting for worlds beyond our solar system for a little over four years now, and it’s been enormously successful. In that time, it’s spotted literally thousands of planetary candidates. Today, three distant worlds –dubbed Kepler-62f, Kepler-62e, and Kepler-69c –have achieved planetary confirmation, while joining an elite cadre of so-called habitable planets.
Kepler-62f (an artist’s depiction of which appears above) and 62e possess radii just 1.4- and 1.6-times that of Earth’s, respectively, and orbit a star some 1,200 light years away, along with three other newly discovered planets. Kepler-69c, on the other hand, has a radius 1.7-times that of Earth, and orbits a star around 2,700 light years distant from our own. Together, the three newly discovered worlds have become the second,third, and fourth known bodies to wear the badge of “Earth-like, habitable zone planet.”
Above: relative sizes of Kepler habitable zone planets discovered as of 2013 April 18. Left to right: Kepler-22b (with a radius 2.4-times that of our home planet), and the newly discovered Kepler-69c, Kepler-62e, Kepler-62f. All of these, with the exception of Earth, on the far right, are artists’ renditions. Credit: NASA/Ames/JPL-Caltech
Judging from their radius and orbital period, Kepler researchers are calling 62e and 62f two of the most similar objects to Earth yet. Their discovery is recounted in an article published in the latest issue of Science.
“Kepler-62e probably has a very cloudy sky and is warm and humid all the way to the polar regions,” said co-author Dimitar Sasselov in a statement. “Kepler-62f would be cooler, but still potentially life-friendly.”
The pair belong to a five-planet system that includes 62d, 62c and 62b. These latter three planets vary in size, but orbit far too close to the system’s parent star to have any chance of harboring water or life.
“There may be life [on 62f and 62e], but could it be technology-based like ours? Life on these worlds would be under water with no easy access to metals, to electricity, or fire for metallurgy,” said lead author Lisa Kaltenegger in a statement.
“Nonetheless, these worlds will still be beautiful blue planets circling an orange star — and maybe life’s inventiveness to get to a technology stage will surprise us.”
What 62e, and 62f have going for them, apart from their placement in the habitable zone, is their size. It is thought that smaller planets tend to be more rocky, and less gaseous, than larger worlds. However, the star they orbit is smaller and older than our own. It’s cooler, and only about 20% as bright. Kepler-69c, on the other hand, an artist’s concept of which appears here, orbits a star about 93% as big, and 80% as luminous as our own, making it the smallest world yet discovered in the habitable zone of a sunlike star.
Its neighbor, Kepler-69b is just over twice the size of Earth and orbits once every 13 days. With an orbit that tight, Kepler scientists it’s way too hot to support either water or life.
“The Kepler spacecraft has certainly turned out to be a rock star of science,” said John Grunsfeld, associate administrator of the Science Mission Directorate at NASA.
“The discovery of these rocky planets in the habitable zone brings us a bit closer to finding a place like home. It is only a matter of time before we know if the galaxy is home to a multitude of planets like Earth, or if we are a rarity.”
The Kepler-62 findings are pubished in the latest issue of Science. Those on Kepler-69 have been accepted for publication in The Astrophysical Journal.

NASA has banned fighting and littering on the moon

New details of the agreement signed by representatives of a number of countries on the development of the moon and the extraction of minerals...