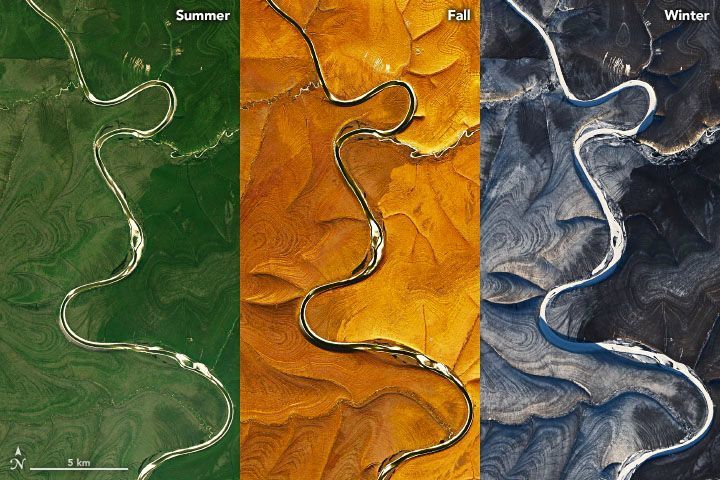 NASA discovered mysterious stripes while studying satellite images of the Republic of Sakha (Russia). Scientists cannot agree on why the hills in the Russian Arctic are replete with strange patterns over the Markha River.

Scientists were bewildered by the photographs obtained, as they cannot explain the reason for the patterns in the region of the arctic hills. The frames show the territory near the Markha River, which is located in Yakutia. NASA researchers are studying why the earth in this place looks strange.

During the study, two hypotheses were put forward. The first says that the secret lies in the icy land.

The area near the river is in permafrost for almost the whole year, but sometimes it thaws for a short time. The alternation of the two processes leads to the appearance of striped or circular patterns.

Geologist Thomas Crafford voiced the second version. Perhaps the appearance of the image is associated with erosion. The stripes found look like a “puff cake”. They usually appear when water descends from a hill, which washes away pieces of rock along the way.

The type of sediment is more prominent in winter, when white snow lies on flatter areas. It seems to highlight them.

As you get closer to the river, where after millions of years of erosion, sediments gather into more uniform heaps, the pattern fades, Crafford added.

According to NASA, the geologist’s explanation is appropriate, but until the region is better studied, the strange stripes will still be considered a Siberian curiosity.

Hence, to clear up the mystery, NASA wants to explore the region.