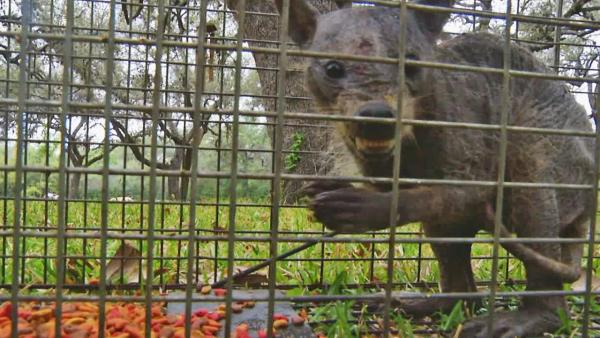 According to legend, chupacabras suck the blood of cows and goats. Although there’s never been real evidence the creature exists, sightings of chupacabras have been reported from Latin America to the southern U.S.
In the back woods of Ratcliffe, a small town in DeWitt County in South Texas, residents are certain they’ve found the mythical, despicable chupacabra, and this time, it’s alive.
Jackie Stock said her husband caught the creature Sunday night.
“He called me to come and look, and I said, ‘Bubba, that looks like a baby chupacabra,'” said Stock.
With its hairless back, large claws, countless teeth and ferocious growl, many would say this animal fits the bill.
“I hunted coons for 20 years with dogs and I ain’t never seen nothing looks like that right there,” said Arlen Parma, who captured the critter.
Parma said one of the biggest signs it’s not a raccoon is its growl.
“A coon don’t make that noise, or a possum. What makes that noise? I guess a chupacabra does, I don’t know,” said Parma.
Most people in DeWitt County are convinced this is the elusive chupacabra, but what do wildlife experts have to say?
“The animal in the cage as best I can tell from the view was some sort of a small canine,” said Brent Ortego, a wildlife diversity biologist with Texas Parks and Wildlife.
Ortego said a canine can include a coyote, dog, or even a fox. He said the animal most likely has mange, which has caused it to lose its hair. But as for a chupacabra, he thinks otherwise.
“It’s never been proven to be a unique species. It was always something out there that allegedly either caused harm or threatened to cause harm to people or their livestock,” said Ortego.
Chupacabra or not, right now this little guy is staying at the Stock household, living off a diet of cat food and corn, at least until someone can find out what it really is.
CNN contributed to this report.

In this article:El Chupacabra, Texas