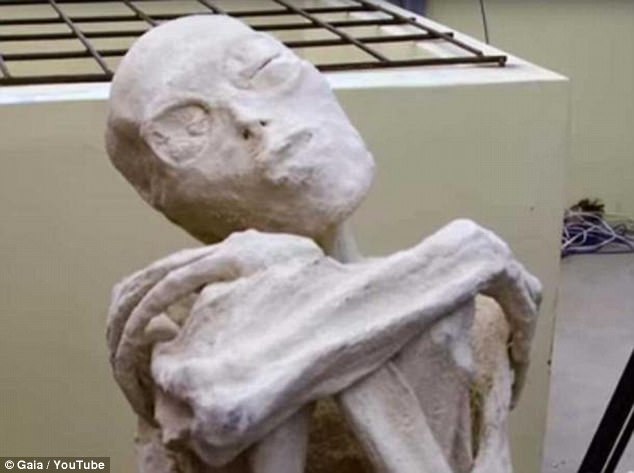 They have largely been dismissed as a hoax by the scientific community,

And yet, it seems, conspiracy theorists are still fascinated by the ‘three fingered mummies’ with elongated heads that were found in Peru last year.

Now, one Russian ‘expert’ claims he has done DNA tests to prove they are not human.

Dr Konstantin Korotkov, a professor of Computer Science and Biophysics at Saint-Petersburg Federal University believes the mummies are ‘aliens’.

Dr Korotkov is no stranger to controversy. He was widely criticised in 2008 when he claimed to have created a camera that could photograph the human soul.

One of the mummies, known as Maria, was found by a team led by controversial Mexican journalist Jamie Maussan in early 2017.

The conspiracy group drew attention to the body’s deformed head and elongated fingers in a short documentary on the discovery.

Dr Korotkov of Saint-Petersburg University said at the time the features were not a deformity and that the find was ‘another creature, another humanoid.’

Now Dr Korotkov his team claim to have undertaken genetic tests on tissue samples taken from the mummy, as well as a second individual found nearby named Vavita, Sputnik News reports.

They said the bodies date back to about the 5th century AD and could be extraterrestrials or cyborgs.

But British alien expert Nigel Watson, author of the UFO Investigations Manual, said the finds are most likely a hoax.

He told MailOnline: ‘I think the whole saga of finding these mummies is laughable and they are very probably fakes.

‘The new evidence does indicate the Maria is human, the only strange thing is that she has an unusual rib structure. This is probably because she is a so-called bone montage made by fakers.

‘If you think about it how would humanoid aliens with three long fingers survive? They would be incredibly clumsy and it seems doubtful they would be capable of making a cup of tea let alone a flying saucer.

‘It also doesn’t look good that this Earth shattering news was originally fed to us via a website you have to subscribe to, rather than through officially recognised scientific channels.’

Nick Pope, who used to investigate UFOs and other mysteries for the Ministry of Defence, and is a leading expert on conspiracy theories, told MailOnline he also doubted the validity of the find.

‘All these stories of mummified aliens – or mummified human/alien hybrids – are either fake news, or misunderstandings of normal human variation, perhaps where something has been lost in translation,’ he said.

‘In this case, I suspect a hoax, and the ‘mummy’ looks more like a plaster model than anything else.

‘If this was real, we’d be seeing peer-reviewed articles in magazines such as Science or Nature.’

The group claimed that Vavita was nine months old when she died and Maria was an adult woman, leading them to believe they were mother and child.

Dr Korotkov said: ‘Tomographic scans reveal their skeletons. The tissue has biological nature and their chemical composition indicates that they are humans.

Their DNA features 23 pairs of chromosomes, just like we have. They appear human but they are not. Their anatomic structure is different.’

The paranormal researcher added that the individuals’ rib structure is different to that of humans as the bones are keel-shaped in the upper part and the rib cage consists of semicircular ribs.

Dr Korotkov has previously stirred controversy when he claimed in 2009 that he had invented a camera that can photograph the soul.

Advertisement. Scroll to continue reading.
In this article:mummified aliens