Stonehenge is one the UK’s most visited tourist attractions – and one of the world’s most enigmatic ancient monuments. People come from all over the world to stare at the iconic stone pillars and wonder how, and why, they were put in place.

It has long been known that some of the rocks that make up Stonehenge must have travelled a long distance before becoming part of the monument. Whilst the larger sandstone blocks (‘sarsen’ stones) that make up its outer circle are thought to have a local origin from the Marlborough Downs area, the smaller ‘bluestones’ are exotic to the region.

However, new theory clashes with belief that the sandstone boulders had been dragged to the location from Marlborough-Downs, 20 miles from Stonehenge. A new study suggests that two of Stonehenge’s largest stones were in place there for millions of years before Neolithic people built the monument.

Mike Pitts, site’s former director of excavations, archeologist, believes that the largest sarsen, known as Heel Stone, and Stone 16, were already sitting there because, unlike the rest of the monument, they were not carved or shaped in any way. Pitts claims that the stones’ natural location could have  been the reason why the whole monument was built in the first place.

Just why the ancient builders took the pains to do that, instead of erecting the monument right there, remains a mystery.

In 1923, Dr H. H. Thomas proved that the thirty bluestones of the Stonehenge on Salisbury Plain originated from the eastern side of these hills. He wrote:

The assemble of Stonehenge’s foreign stones presents the significant feature of derivation from a comparatively small area where all the various rock types occur together. Such an area may be limited by the actual outcrops of rock in question or the stones may have been taken from the boulder-strewn slopes in the immediate south and south-west of the Preseli between Carnmeini and Cilmaen Llwyd where all of the types have been collected together by glacial action.

He later added, ‘It is probably more than a coincidence that this area, clearly indicated by geological evidence as the source of the Stonehenge foreign stones, should contain one of the richest collection of megalithic remains in Britain.’

Professor R. J. Atkinson, author of ‘Stonehenge’, considers that at least ninety bluestones were takes from the outcrops Alw and Meini on a land journey of around 200 miles from here to Salisbury Plain. it is also of interest that the ‘foreign stones’ of Stonehenge are not the same. Two of that are of different type of rock and it is believed that the originals fell into the sea at Milford Haven and the removal men picked up two random stones from the local area to replace them. The are called bluestones because of their colour in wet weather. The term ‘bluestone’ in relation to Stonehenge encompasses around twenty different rock types, including rhyolites, dolerites and ‘calcereous ashes.’

The longest is 13 feet and the heaviest weighs 4 tons. It was suggested that the 16-foot altar stone came from the Cosherton beds along Milford Haven. What an amazing journey and a incredible task for people of those times to undertake!

For about two decades, Robert Ixer of the University of Leicester in the U.K. and study co-author Richard Bevins, of the National Museum of Wales, have searched for the origins of the bluestones in outcrops around Wales.

In 2011, a megalithic bluestone quarry was discovered at a site in South West Wales known as Craig Rhos-y-felin, which is now located on private land near a sheep farm. The latest find leaves two prominent theories for how the Welsh rocks got to Salisbury.

Humans could have quarried the site and dragged the blocks on wooden rafts. Or a giant glacier may have chiseled off the blocks and ferried them about a hundred miles (160 kilometers) toward Stonehenge, with humans dragging them the rest of the way. If humans did the digging, archaeologists might detect marks left by tools or some other evidence. But if signs of human quarrying are lacking, the glacier idea might gain the upper hand.

Advertisement. Scroll to continue reading.
In this article:megalithic bluestone, Stonehenge 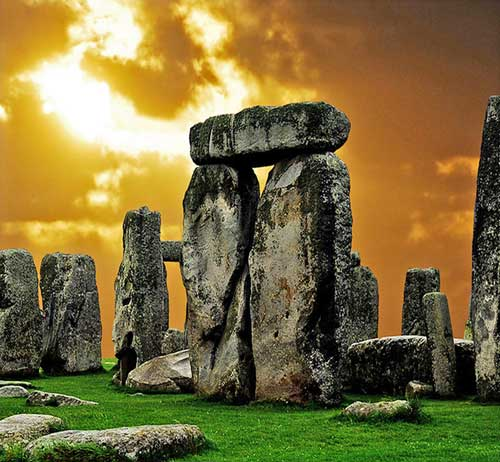